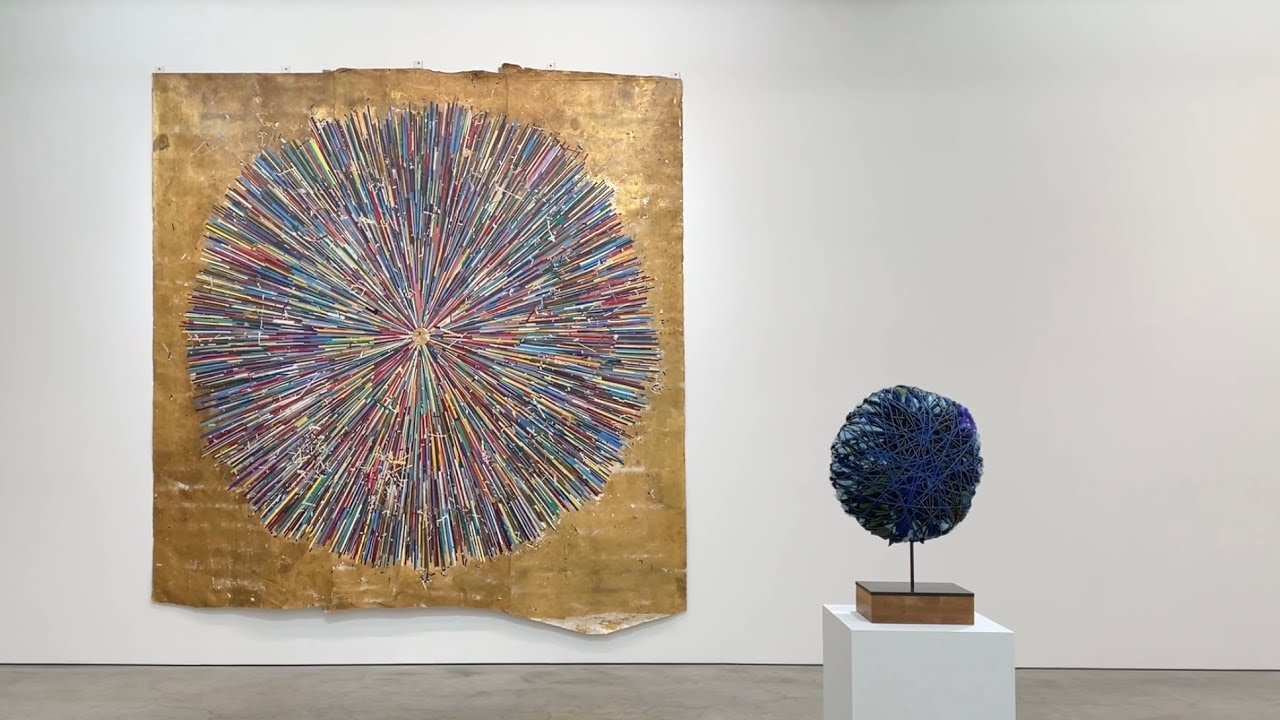 Sikkema Jenkins & Co. presents Un-Fair, a seasonal group show featuring work by William Cordova, Zipora Fried, Sheila Hicks, Cameron Martin, Vik Muniz, Kay Rosen, Erin Shirreff, and Kara Walker. Incorporating painting, sculpture, photography and works on paper, this exhibition highlights the diverse creative endeavors and cultural backgrounds of our artists. The majority of work included here is new, produced within the past year, and originally intended for art fairs around the world. While 2020 saw the transformation of such exhibitions into online viewing rooms and other virtual spaces, we are grateful to now be able to show these works in the gallery and offer visitors the incomparable, singular experience of viewing them in person.

William Cordova (b. 1961, Lima, Peru), is interested in the ephemeral visuality of transition and displacement, how objects and perception change and adapt within time and space. Utilizing material such as gold leaf, graphite, and and paint, Cordova represents sacred geometries and galactic structures as vital, interconnected networks of communication, mobility, shelter, creation, and spirituality. Recent solo exhibitions include on the lower frequencies I speak 4U, Sikkema Jenkins & Co., NY (2019) and now’s the time: narratives of southern alchemy, Pérez Art Museum, Miami, FL (2018). Cordova earned his BFA from The School of the Art Institute, Chicago (1996), and his MFA from Yale University (2004).

Zipora Fried (b. Haifa, Israel) builds her large-scale colored-pencil works stroke by stroke, meticulously imprinting each mark upon the paper. The cumulative effect is of a luminous landscape composed entirely of color, evoking an intricate spectrum of emotionality through methodical, disciplined abstraction. Recent exhibitions include As the Ground Turns, Sikkema Jenkins & Co., New York (2019); (wordless) at Small Editions, New York (2017); Late October, On Stellar Rays, New York, NY (2016); and Zipora Fried: Some Things Have Meaning, Others Don’t, Marfa Contemporary, Marfa, TX (2015). She studied at the Academy of Applied Arts, Vienna, and currently lives and works in New York.

Cameron Martin (b. 1970, Seattle, WA) incorporates both traditional and digital methods in his process of drawing and painting, developing a hybrid visual system that negotiates methodical abstraction with improvisational representation. He received his BA from Brown University (1994), and continued his education under the Whitney Independent Study Program (1996). He has exhibited at venues including the Whitney Museum of Art, St Louis Art Museum, Columbus Museum of Art, City Gallery (Wellington, New Zealand), and Tel Aviv Museum. He currently lives and works in Brooklyn.

Vik Muniz (b. 1961, São Paulo, Brazil) is recognized for his photographs of reimagined art historical imagery, created from from a wide variety of materials. His Surfaces series continues exploring the space between object and meaning, as the viewer’s experience of the physical work of art becomes recontextualized by additional modes of image production and representation. His work has been exhibited in prestigious institutions worldwide, with recent solo exhibitions at the Chrysler Museum of Art, Norfolk, VA (2018); Belvedere Museum, Vienna, Austria (2018); and Museo de Arte Contemporáneo, Monterrey, Mexico (2017). In 2011, Muniz was named a UNESCO Goodwill Ambassador, in recognition of his contributions to education and social development projects in Rio de Janeiro.

Kay Rosen (b. 1943) has been investigating the visual possibilities of language since 1968, when she traded in the academic study of languages for what she describes as her endless inquiry of language-based art. Her work has been described as sculpture, poetry, aarchitecture, and performance, with meaning conveyed by the structure of a word and the formal qualities of letterforms. Major solo exhibitions include a two-venue mid-career survey entitled Kay Rosen: Li[f]eli[k]e, curated by Connie Butler and Terry R. Myers at the Los Angeles Museum of Contemporary Art and Otis College of Art Design (1998), and shows at institutions such as Aldrich Contemporary Art Museum, Ridgefield, CT; Grazer Kunstverein, Graz, Austria; Art Gallery of New South Wales, Sydney, Australia; and Museum of Fine Arts, Boston, MA.

Erin Shirreff (b. 1975, Kelowna, British Columbia) produces her vivid cyanotypes through a camera-less photographic printing process, manipulating natural and artificial light to create pattern, form, and shadow. The cyanotypes are then cut, layered, and arranged to form abstract, painterly compositions that complicate the materiality of their own image-making. Shirreff’s work is currently on view in Remainders, a solo exhibition at the Clark Art Institute, Williamstown, MA. Other major solo exhibitions include New Work: Erin Shirreff at the San Franicisco Museum of Modern Art (2019) and Halves and Wholes at Kunsthalle Basel (2016). She received her BFA from University of Victoria, British Columbia (1998) and her MFA in Sculpture from Yale University, New Haven, CT (2005).

Hundreds of archival, never-before-seen drawings by Kara Walker (b. 1969, Stockton, CA) will be featured alongside new work in the upcoming solo exhibition Kara Walker: A Black Hole is Everything a Star Longs to Be, at the Kunstmuseum Basel (Spring 2021). Walker was most recently selected by the Tate Modern for the 2019 Hyundai Commission, presenting a large-scale public monument entitled Fons Americanus. She received her BFA from the Atlanta College of Art (1991) and her MFA from the Rhode Island School of Design (1994).