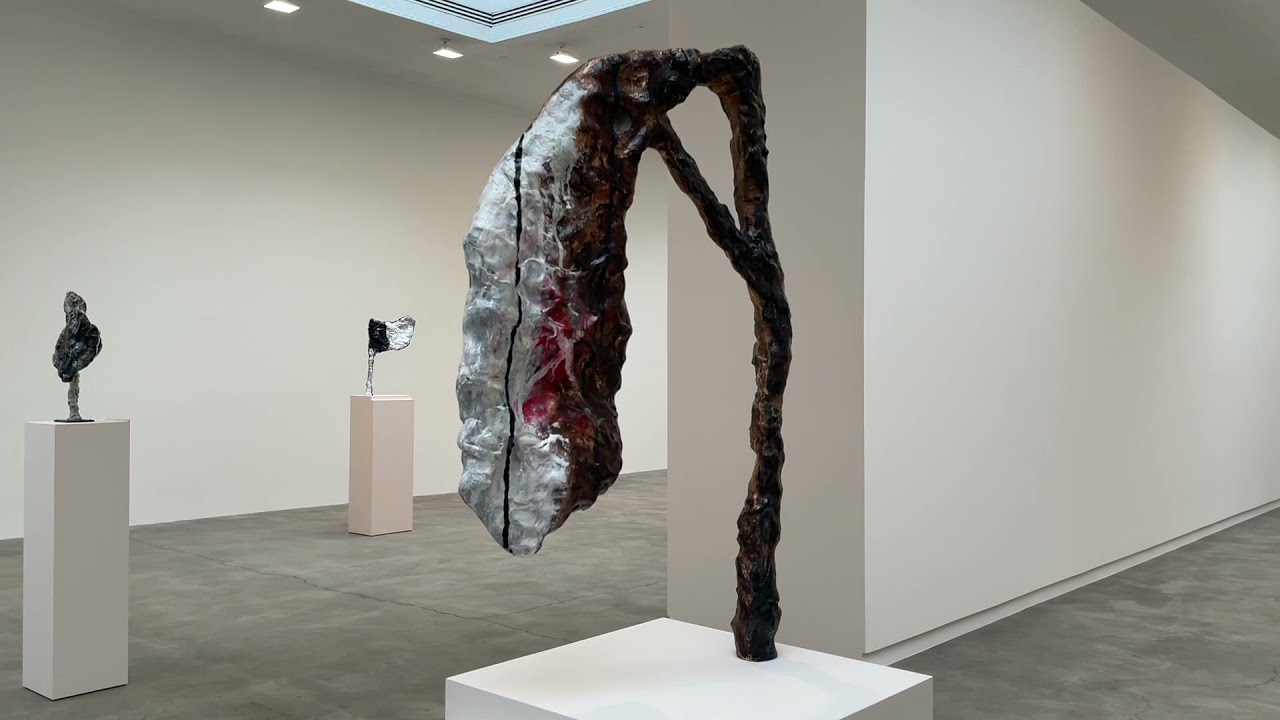 For nearly three decades, Rebecca Warren has explored the potential of contemporary sculpture by challenging conventions of Modernist and Minimalist sculptural practice. Using the medium’s traditional materials of bronze, clay, and steel, Warren constructs expressive, corporeal forms that are at once abstract and elusively figurative.

In her exhibition Rebecca Warren: V at Matthew Marks Gallery in New York, the artist presents nine new sculptures in hand-painted bronze on variously colored pedestals, including slender totemic sculptures and smaller, more intimate works, all of which are being shown for the first time.

To say that Rebecca Warren’s sculptures are always extremely tactile seems like an understatement. They offer themselves as hybrids between unwrought form, symbolic informe, and transmitter, an object triggering an entire chain of associations with lofty and lowly forerunners or reproductions, whether drawn from antiquity or from the artistic and non-artistic canons.

It’s true to say that, over her career, Rebecca Warren has worked from positions of assumed power, channeling all that is egomaniacal, grandstanding and preposterous — and by that I mean thrilling and excellent — about the art of the past in order to make sparks fly in the here and now.

A large proportion of Warren’s works bear vestiges of her. The haptic surfaces of her clay and bronze works trace the lines of her touch, her fingerprints and her palm. They wear the marks of her making — massaged, squeezed, and pushed.

Warren has frequently returned to the trope of the double or doppelgänger. The pair of globular Little Dancer figures entitled The Twins (2004); the multiple remade bronzes of 2005, like BOBO and its ravaged twin, Dou Dou Che — such work speaks broadly to an anxiety about that which resembles something, but isn’t that thing.

Rebecca Warren: I wanted these new works to be somehow denser than previous bronzes in order to integrate them more completely with their painted surfaces, making them more concentrated, more intense.

The nature of that intensity emerged as they were being made. I came to imagine a wholly alien, unknown, hostile, vast, bewildering, faraway, barrenness where some Things might be placed — they being the only reality that could make any sense in such an environment.
From someone else’s point of view, the Things’ origin, purpose, and meaning could only be guessed at. They might be a warning, a contract, a place-marker, a homing beacon, a declaration of new ownership, a reply to a question no one knew they had asked. They could be bits off something — fallen parts of a craft, say. Or they might be the packaging it all came in. And who could know what scale they exist at? They might be a single letter or a whole library. Or the markings might be the irrelevant consequences of the mode of inscription of the actual message — like the reflected glare on a painting. Their position and orientation, and the proportions of their constituent materials might (or might not) be critical. And so on into a zone of strange, dislocating, alien potential.