Jeenho Seo has been presenting his work through diverse mediums such as photography, sculpture, installation, and video documentation with transition and interactivity as focal elements. Whether in the production process or by its presentation, Seo invites viewers into his work to explore boundaries between the making process and its final form.

From his personal experiences of moving from city to city, country to country, Seo has found interest not only in our communication structure such as language and symbols but also how the meanings are shared within a community. The benefit of the doubt, his recent solo show at BACKYARD GHOST (Brooklyn, NY), revolves around the mouth, the passage for verbal communication and nutrition along with other functions. In this interview, Seo discusses how his practice has evolved throughout time, what has been and still keeps occupying his mind, and how his journey as an individual and as an artist shaped the current exhibition.

RL: When considering it in its entirety, your body of work is visually so diverse. Could you tell me about the trajectory of your artist career and your earliest works?

JS: I used to focus on altering realistic objects and figures in my paintings when I was an undergraduate. I was having a hard time breaking the boundaries within the frame. So I tried to alter images and objects outside of the frame which is basically in real life. That’s how I got into a variety of bodies of work. First, it was very simple, instead of painting what I wrote in my book, I’d just ask people around me to be in the image I wanted to visualize.

For example, one of my earliest works IMG_1403~1518 (2018) is an interactive project for which I made a t-shirt with a mirror attached in front and asked my close family and friends to wear it. I drew a smiling face on the mirror and tried to overlap my face in reflection and then took photos.

RL: What does the mirror signify?

JS: I was thinking of the mirror’s reflectivity. After graduating from the undergraduate program, I was having a hard time finding reasons to keep making art. I started asking questions about why I make art, what art means to me, what my desire is, and so on. I was looking at the mirror a lot at the time asking these questions.

RL: What about Beautiful Mind (2018)? Did you always have an interest in clothing? Were you also thinking about your relationship with others and social expectations in this work?

JS: Yes. This work started from the fact that I have more clothes than I need and I was also thinking about what a piece of clothing can connote both socially and emotionally. I started digging into this material with the fact that I have more than I need. I wanted to understand why. I concluded that it was to meet multiple images the society has created. I might have created myself by labeling society. These two confusions between my desire and a societal desire towards a man, a person, etc. were what I was trying to deal with at the time. I got very attached to the items that are in between myself and others, which ironically could be many things.

I also wanted to see if people go through these somewhat inefficient questions when they choose clothes. In Quaking standard, I asked people to go through super long racks of clothes only with their phone lights so that I can capture their movements with a long-exposure camera. They were asked to choose one item with the question “If you were a garment, what garment are you?” I wanted to capture the movement which was created by a different question for our everyday choices.

Growing up watching my parents building houses, I was privileged enough to know when and where there are empty spaces available for me to perform short projects. I wanted a raw space where the participants could focus more on themselves.

People interpret this project in many different ways – some people think it’s a comment on mass consumption, and some people focus on the space and site-specificity which all lies in the project. But for me, it’s about personal experiences and tensions. I wanted to capture the moments of thinking hesitation, and certain emotional states when people try to make choices between different clothing items. How their perceptions of self are reflected in their choices.

RL: What about the way you see yourself? Did the perception of yourself change as you moved from Korea to the United States? From Connecticut to New York? If so, what do you think were the reasons?

JS: I was and still am self-conscious about how I am viewed by others. It will never go away. When and whatever desire (mostly social) I have at the moment, I question its origin. People seem to have an easier time with their opinions than I do. When I was making those earlier works, I realized that I was trying to live up to the expectations of those around me, especially of those who are close and dear to me. And also, Korea has its own atmosphere in terms of societal pressure or norm per se. It is very easy to stand out. Maybe it’s because almost 95% of people are Korean. But here? Oh my god, nobody is the same, and they just don’t expect others to act the same, at least in my limited experience. But, there’s a certain responsibility? Or moral sense? That’s expected as a resident here, that is I think closely related to their race and/or socioeconomic status. The idea of self, freedom, and responsibility has shifted a lot.

RL: Do you think that self-awareness is reflected in your most recent exhibition?

JS: Yes, for sure! It’s pretty funny to say that I am saying it though. I was thinking about my standpoint in terms of privilege a lot. How I’d be perceived in the United States. I could experience some racism/classism working as an art handler which also just could have been my perception. But at the same time, I am in a privileged position depending on when, where, and who I am talking to. This multi-identity within oneself got me focused on the speaker’s agency – the flexible space in our body, mouth, and so forth. But whatever comes out from it as a language, that becomes something stationary, like a sticker or label. 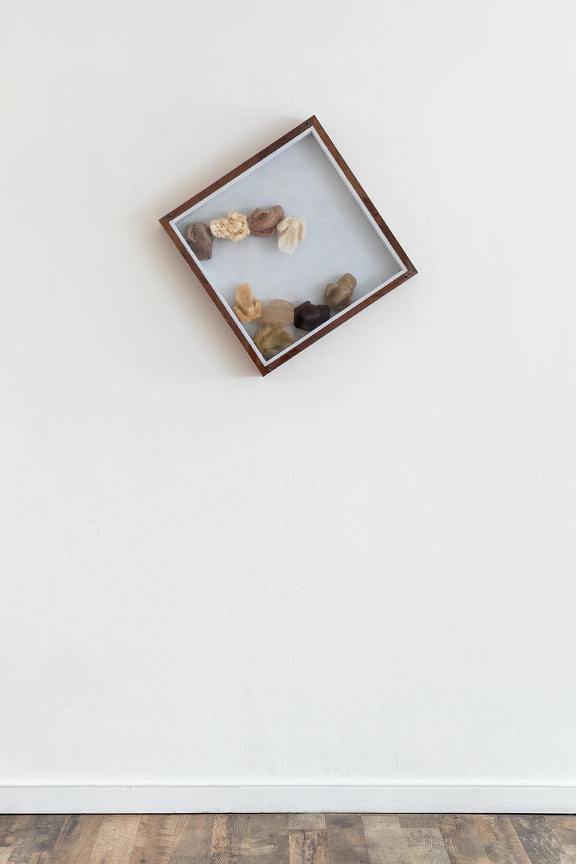 RL: Speaking of language being stationary, is that idea also reflected in the diversity of materials of your works? I am curious to hear about works like Depends. To me, it seems like different materials are clashing with each other.

JS: I guess so? I do believe that different materials and mediums have their own ways of communicating. Don’t get me wrong, this is a very limited perspective of how I see and understand things. Since I start much of my work from writing, I tend to find materials and methods following the writing. From there I start researching what and how it could be visualized the best and this is probably why I have created what I’ve made so far.

I used my mouth when making a lot of the works in this show and my body is used in almost all of my practice. The audience certainly plays a role by entering and exiting the works, but the core of it all is about how I can break my prejudice and my thoughts. Depends is a work combined with two main factors. One is the part of its image and its materiality. The negative space of my mouth represents a speechless situation. The other part is the way the work is presented: how it’s activated by the viewer, clashes with each other, and makes noise while deteriorating. 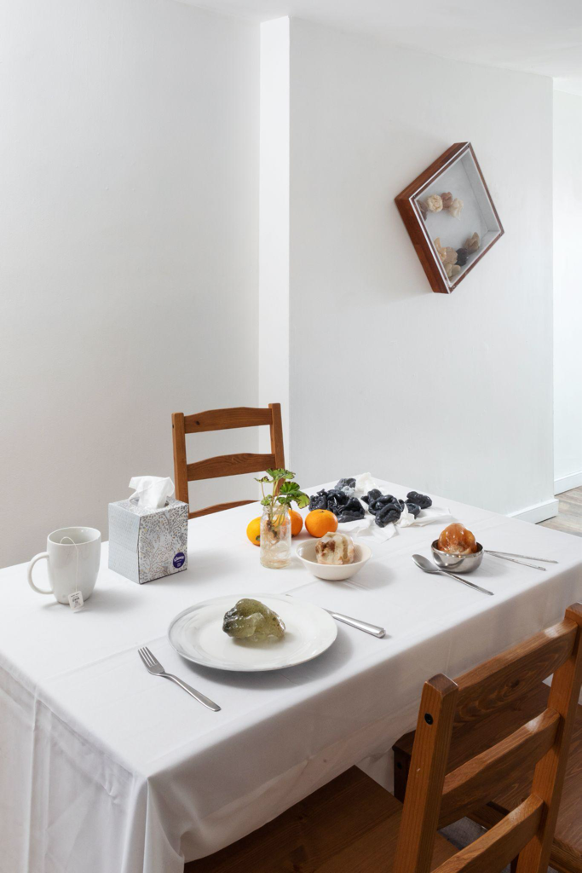 RL: The benefit of the doubt took place in a domestic home setting. How did that setting influence your works? Or did it not?

JS: There are definitely some elements that I am unable to change: a table in the house, the way furniture is set up, and so on. But I had a very minimal engagement with the space itself. I think I am becoming more independent. I was not dependent on other people as much as before when making and presenting works. These self-standing objects could be defined by their materiality and how they are situated. However, I’ll probably always have some works that will only stand as work when the viewers are there.

I do believe that I am still in the transitional phase in terms of making art and life in general. This situation will always be part of my work since I do not feel comfortable staying in the same position even though my desire wants me to. I do hope to find opportunities to maintain my practice so that my work and the conversation around it could always be different.

Jeenho Seo (b.1989) is a multimedia artist based in Brooklyn, NY. Born in South Korea and raised in the UK and Korea, Seo earned his MFA in Sculpture at Yale University and BFA in East Asian Painting and Sculpture at Hong-ik University. He explores his artistic expression eclectically through installation, sculpture, performance, and photography. Seo recently held his solo exhibition, The Benefit of the Doubt, at Backyard Ghost in Brooklyn, NY, and his works were included in group exhibitions at High Line Nine, New York, NY; M23, New York, NY; 36 Edgewood, New Haven, CT; Japan Society, New York, NY; Seoul Station, Seoul, Korea, among others.

Rachel Lee is an art professional based in NYC. She earned BA in Art History from Boston College and MA in Critical Theory and the Arts from the School of Visual Arts, New York, and have previously worked at Skowhegan School of Painting and Sculpture, Gallery Korea of the Korean Cultural Center New York, and the International Program Department at MoMA. Her research interests include Korean diaspora artists living and working in the United States as well as the ways in which museums and other arts organizations can facilitate a more nuanced way of narrating art histories through exhibitions, education programs, and publications.