Andrew Cranston: Waiting for the Bell

Scottish painter Andrew Cranston has said that his subject is “something like history…personal histories, but also little pockets of history that are there. Like I always hear, for example, where someone was when JFK was shot, or something like that.”

There are no allusions to historical events in Cranston’s paintings. What the artist gets at is something like the experience of history, how the intimate and personal finds its place in the big. In several of the small paintings in the show, done on the backs of hardback books, the shapes of pitchers and vases are nestled, close-up, into the bottom half of a composition wherein the top half or third a faraway house or a horizon line for sea or mountains invokes depth. In Cranston’s large-scale canvasses, too, human figures — resting under trees, sitting in shadow, gazing out from a boardwalk — are positioned in the foreground opposite a receding landscape. In bright mid-tones nestled into surfaces sometimes with bleach, varnish, and rabbit skin glue in addition to oil paint, Cranston counterpoises private life and a wider world, things close enough to touch and distant enough to ponder. In Let’s talk about this story of yours we see distant fields and trees through the tinted windows of the same warm-toned room of oranges, pinks, and blues that encompass the two figures at the table, their forms backlit, nestled into the pattern of the tiled floor. It’s as if everything in the painting appears in proportion to how it has touched the beholder, in the haptic as well as psychological sense. While even what is close has the distance of something dreamed.

From a formal standpoint, Cranston achieves a dream-like depth in his paintings through an emphasis on surface patterning. Within his pallet of vibrant mid-tones, distant clouds appear level with the dotted pattern of a pitcher. As in the paintings of Post-Impressionists Pierre Bonnard and Edouard Vuillard, form arranged with equal tonal intensity across the picture plane lends a sense of encompassing space, and with that time suspended as opposed to progressing toward a single point. Also as in Bonnard or Vuillard, in Cranston’s paintings, it is often domestic, or at least human-centered spaces — beaches, cafés, pathways — that contain the inward gaze. If people aren’t present in a painting, then pitchers, cups, and other kitchenware speak to their imminence. Cats and dogs recur, concentrating Cranston’s expressions of animal comforts.

Of the many animals that appeared throughout the paintings on view, I found myself, at first inexplicably, drawn to a little terrier held by the central figure of “Waiting for the Bell,” the large-scale canvas for which the exhibition is named. Like every other animal we see in Cranston’s paintings, the dog’s figure is nestled into the color or pattern that borders it, which here is the stripped peach sweater of what appeared to be an old woman. Around this figure, Cranston has dappled bleach onto the plum-stained canvas creating dots of light that vary in intensity from pink to almost white, like fireflies or a film strip devolving by splotches in the seconds before it slips out the reel and runs blank. To the figure’s left, small magenta rectangles, faint within the pink of the canvas, make a receding path to a man standing with his back to us, his shirt a little blue square. As elsewhere in Cranston’s paintings, this scene invokes a recession in depth. Yet it appears within reach compared to the cosmic space effected by the bleach-dots, receding into and projecting out from around the woman’s seated, stable form. A table of chairs inscribed in faint lines of bleach to her right appear semi-transparent, like a memory near to being forgotten.

While in ways the strangest work on view, Waiting for the Bell concentrates that tension between the closeness and distance that runs through the exhibition. Whatever the bleach-dots recall or signify, the distance they portray feels absolute. Without that little white dog, the woman painted at the center would appear unmoored, floating in space. In Cranston’s paintings, that which is the most intimate, the most tactile, often holds the most weight.

For all the legibility of Cranston’s subject matter, it’s his use of materials that lies his paintings’ real power of suggestion. In addition to bleach and rabbit-skin glue, Cranston paints in distemper, a matte, chalky medium, and varnish, which lends some of his works a sheen. The effect of these is evident in the small works in particular which have been rendered on old hardback book covers, found objects with unique material identities rooted both in their make and their age. While the large canvasses envelop the viewer in the image, these are the size of things you could hold in your hands. Their surfaces are textured: in one painting, thick globs of shiny varnish, peppered with bumps, encases an image of a woman holding a cigarette in a café, evoking the slickness of her cup and the sheen of the window behind her. In another, a thin wash of bleach reveals the grain of the book cover as it depicts the light in a night scene. Colors are matte and then shiny, thick or thin, evoking taste, smell, touch. Here, form is embedded in the painted surface and in the book covers themselves, soft and fragile objects with fraying edges.

There is an intimacy as well as a tenuousness to the moments Cranston renders in paint, contingent as they are on the worn, physical surfaces that contain them. In stark contrast to the history paintings of the western canon, the personal histories that Cranston speaks of are sourced from the stuff between life’s big events (and one wants to say beneath them). The dreams or memories they reference are the sort that one could imagine forgetting — only to remember afresh in the pattern of a pitcher, in a stain of bleach, in the spine of an old book. 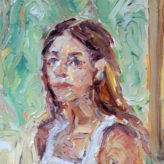 Kate Butler is an artist, educator and writer living in Brooklyn. She earned her MFA in Fine Arts and MS in Art History from the Pratt Institute in 2019. See her work at katebutlerstudio.com