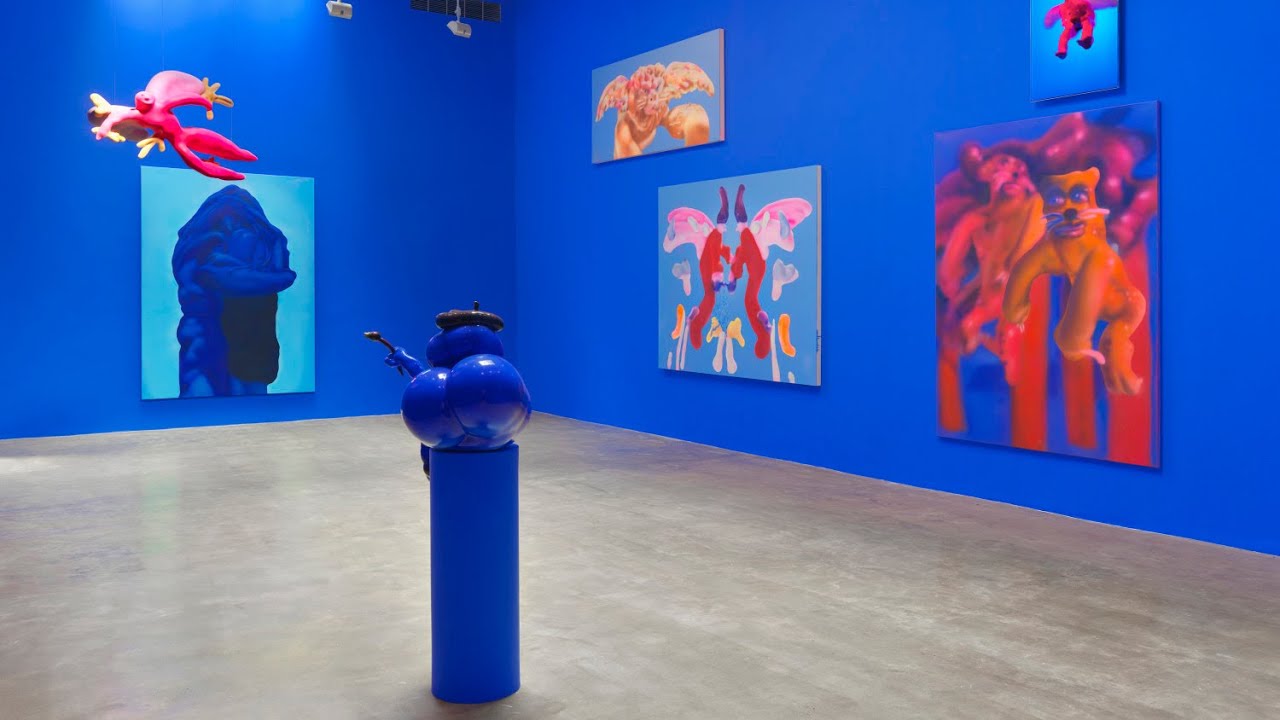 For over a decade, Austin Lee has explored the emotional potential of software-influenced art. He combines traditional techniques with the latest digital tools to create vibrant paintings, sculptures and animations. All of the works in Like It Is, Lee’s second exhibition at Jeffrey Deitch in New York, are composed in virtual reality and then made into physical objects.

Permeating Lee’s work is a fascination with feelings and the human psychological experience. Many of the paintings reference the famous Rorschach test, a diagnostic psychological test that uses a subject’s perception of inkblots to analyze their personality characteristics and emotional functioning. Some of Lee’s images pull directly from the test’s familiar symmetry, while others make a quieter reference. Each work renounces predetermined narratives and instead invites viewers to connect through their thoughts and emotions.

Appreciating the variety of ways in which digital images can enter the physical world, Lee expands technology’s implications and possibilities in art-making. He uses 3-D modeling, motion-capture and virtual reality to translate nuanced observations and atmospheres into airbrushed paintings. Whether referencing pop culture icons or creating his own characters entirely, Lee’s paintings build on recognizable cultural motifs and art historical imagery, spanning from historical photos and tarot cards to Vermeer paintings.

Until recently, virtual reality had been something of a fantasy for fiction writers or an obscure tool for technology fanatics. Now in 2022, virtual reality is quickly becoming another way in which digital worlds collide with our everyday experiences. Lee elaborates:

“In my lifetime, I’ve seen computer software and hardware innovations change the way humans interact at a pace that is hard to keep up with. The images and fantasies of others have become intertwined with our lives in a way that influences our own perception of reality. With each new tech expansion comes both positive and negative side effects. Isolation mixed with mediated interaction, subversive advertising, facing overwhelming tragedy alone and through a screen – these are just some of the confusing, disorienting experiences that are hard to adapt to and highlight our need for authentic connection.”

Visitors to Like It Is will be confronted with an immersive experience that includes paintings, animations and life-size 3-D printed sculptures, all of which were created through Lee’s unique, multistep process. On the roof of the gallery, an augmented reality sculpture will be visible by using an Instagram filter.

Mirror (2022), Lee’s latest sculpture representing a body in front of a screen, will be visible from the gallery window at all hours of the day.

Austin Lee (b. 1983) is an American artist based in New York. Lee’s airbrush paintings often combine digital technologies with traditional media. Lee was born in Las Vegas, Nevada, and raised in Philadelphia. He received an MFA in Painting from Yale School of Art in 2013 and a BFA in Painting from Tyler School of Art in 2006. While a student at the Tyler School of Art in Philadelphia, Lee’s studio doubled as a gallery space where he organized group and solo exhibitions to promote his artistic community. After attending Yale for his MFA, Lee moved to New York in 2013. In recent years, he has presented exhibitions all over the world from Kaikai Kiki in Tokyo to Mosaic Art Foundation in Istanbul and M WOODS in Beijing. Lee has collaborated with Jeffrey Deitch on the occasion of his ambitious solo exhibition Feels Good in New York in 2019, a curated solo presentation at the Armory Show and Good Pictures, a curatorial project with over forty contemporary artists, both in 2020.