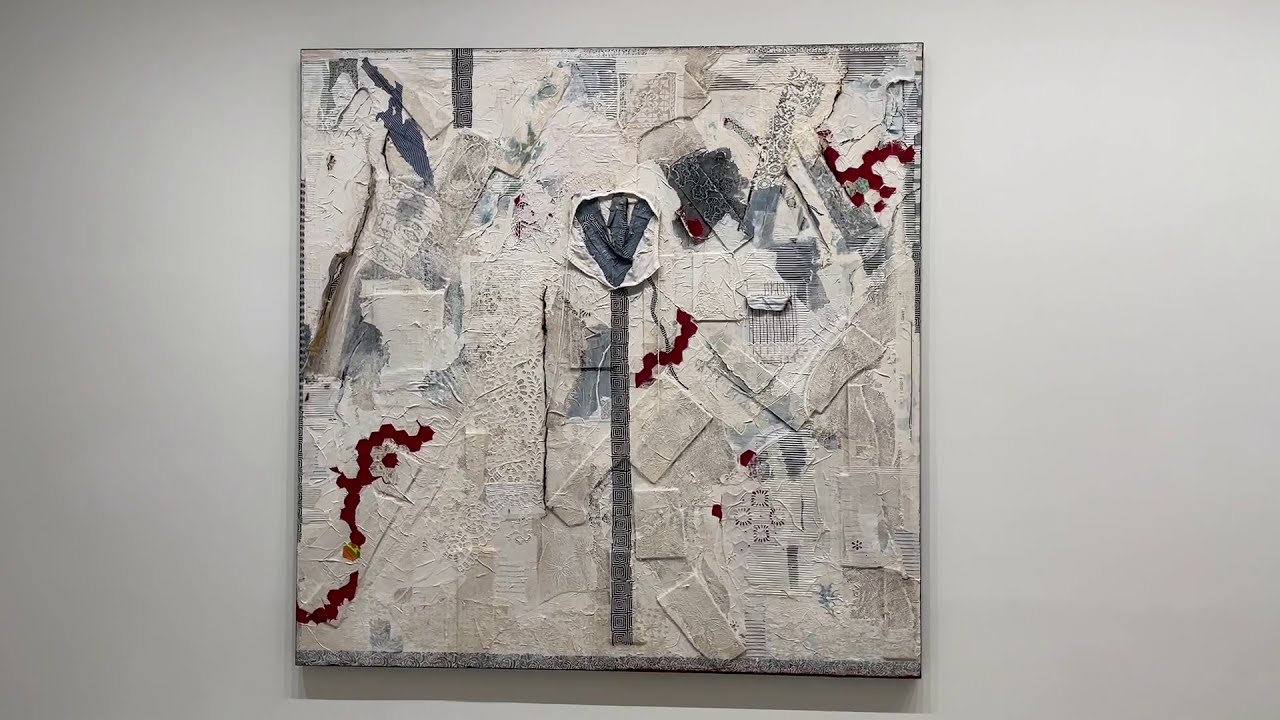 All images courtesy of Sperone Westwater

Sperone Westwater is pleased to present Peter Sacks’s first solo exhibition at the gallery, titled after his epic narrative, Republic. Additional related paintings will be on view, including the series Above Our Cities, and the Sangoma works on paper. A catalogue, with an essay by Emily Braun, Distinguished Professor of Art History at Hunter College and the Graduate Center of the City University of New York, will document the exhibition.

Recently described in the pages of The New Yorker as “one of the most exciting painters in America.” Sacks utilizes diverse, work-a-day materials like cotton, burlap, lace, wood and cardboard, some fleetingly imprinted with poetic texts typed on the cloth by the artist using a manual typewriter. The artist also composes with fragments of Indian textiles, indigo blue cottons from South Africa, antique kimonos from Japan and embroidered linen from Normandy. The twisted, torn and joyful pieces of fabric evoke unfurled banners, flowing rivers, semaphores – and in this new series, the skyline of American cities. The recycling of fabrics from the global textile trade suggests the labor involved in their making, while intimating a sense of impermanence and loss, migration and diaspora. As Braun writes in the catalogue, Sacks has pushed collage beyond the modernist practices of Surrealist incongruity and post-war base materialism, making it the medium of a new, postcolonial syncretism.

Republic holds chaos and order in the balance. Its debut in this exhibition establishes Sacks as history painter; conceived and elaborated over the tumultuous months of 2020, the triptych is his most political work to date. The narrative of precariousness unfolds across the three panels, juxtaposing injury and repair, loss and retrieval. As with Above Our Cities, 2020, a series of 3×3 foot canvases, riotously colored banners, potentially menacing, potentially jubilant, course through the skies. The vibrant Sangoma collages on paper, 2020, with roots in Sacks’s Southern African upbringing, refer to the Zulu healers. Though abstract in essence, these drawings imply the curative powers of the ancestors summoning spirits using dance, music and symbolic garments.

This exhibition also features Sacks’s Mare Incognitum, 2019, a large multipart assemblage of textiles and embedded shells mounted on wood panels. The two upper registers form a frieze of ancient Greek ships bearing apotropaic eyes. Beneath the textile fleet of Argonauts, oceans team with kelp, snails and other marvelous aquatic life made from the vivid patterns and prints of multicolored fabrics. As with all of Sacks’s compositions, the layers of history, myth, ritualistic practices and literary references run deep and are deeply informed.

Peter Sacks was born in Port Elizabeth, South Africa, in 1950, and grew up in Durban, on the Indian Ocean. After a term in Medical School at the University of Cape Town, he decided to pursue Political Science and Literature at the University of Natal. He became involved in the struggle against the apartheid regime as a member of the National Union of South African Students and executive of the Students Representative Council. In 1970 Sacks emigrated from South Africa and spent the following several years studying in the United States and the United Kingdom at Princeton, Oxford and Yale. While authoring several books of literary scholarship and poetry, he painted privately, mostly in notebooks – several of which accompanied his travels on foot in South America, Asia, Africa and Europe. Sacks had his first solo exhibition in Paris in 2004, followed by exhibitions in New York and London. His works are in numerous private and public collections worldwide, including the Metropolitan Museum of Art, New York; Museum of Fine Arts, Boston; Museum of Fine Arts, Houston; The Collection of the Constitutional Court of South Africa, Johannesburg; The Ethelbert Cooper Museum of African and African American Art, Cambridge, MA; The Bonavero Institute of Human Rights, Oxford; and the Beyond Borders Foundation, Edinburgh. Peter Sacks works in studios in Massachusetts and New York City.