In  “hope against hope,” on view at 56 Henry in New York City through January 29th, Timo Fahler uses stained glass to investigate both the affordances and the limitations of personal and cultural myth. The expression “to hope against hope” implies clinging to possibility against unfavorable odds. One could say that the mosaicked glass panels in Fahler’s constructions, each delicately suspended from industrial steel rods with hooks and twine, physically enact the potential precariousness of belief. It would be wrong, however, to say that Fahler’s works are solely meditations on spiritual or existential fragility. Their rebar steel frames and radiant surfaces emanate a brilliancy and robustness that speaks to the imaginative fortitude required to carve out a convincing identity for oneself in the United States: especially, in Fahler’s case, as a Mexican-American artist growing up in the Midwest.

A Los Angeles-based multimedia artist, Fahler was born into a religious family in  Tulsa, Oklahoma. As a child, he was enrolled in a parochial school and attended two different churches twice a week. This religious upbringing (from which Fahler broke away in early adulthood) influences his work in stained glass.  For Fahler, stained glass is not a neutral material; as a decorative element of the church, it bears the legacy of ecclesiastical doctrine and European invasion. Through his depiction of Aztec deities in (traditionally Christian) stained glass, Fahler plays with the concept of “Mestizaje,” an early twentieth-century racial theory that fuses European and Indigenous iconography.

“Mestizaje” might be legible in a work like Mictlantechulti and the dust bowl (2022), where vermillion flames tumble from the mouth of the Aztec god of the dead, scorching the wheat-colored earth. Anyone who has lived in the Midwest will recognize this sky. Blank and cloudless, it stretches into oblivion over the flat fields, collapsing foreground and background into a totalizing blue. Mictlantechulti and the dust bowl, like most of the works in “hope against hope,”  patchworks multiple myths—Aztec cosmology, Christian salvation, Manifest Destiny—into an exaltation of both the artist’s Mexican roots and the American landscape. Contemplating the work, Fahler recounts how it was influenced by a shifting relationship to the land of his childhood: “The Midwest is this very conservative landscape,” he explains. “For a long time, I wanted nothing to do with it. But ultimately, I was raised there. And I’m trying to make sense of being raised in that space, and [under] that sky.”

If ‘mythology’ is one key theme in Fahler’s work, ‘character’ might be another. Much of Fahler’s recent work has explored the idea of an alter ego; in his 2021 ‘Alter Ego Series’ (not included in this show), Fahler created a  series of ‘characters’ in stained glass.  One of his latest works in this vein is Tonatiuh, Tulsa and the fifth sun (2022), which features a glass cast of the artist’s face sprouting from the earth, between two cracked halves of an ornate sun. For Fahler, depictions of the self (or alternative selves) have been a way to sort through a range of often conflicting identities: “To be brown in a white space, white in a brown space, queer in a straight space, “ he says,:….alter-ego and myth are ways of working through all that. I just want to belong. I want to understand. On some days I don’t know if I do. But I can point out these complexities to you, or even just to myself. And if they are there for me, they are there, in different ways, for all of us.” Personal history, for Fahler, is inextricable from collective history.

In this sense, far from being plaintive or wistful, the exhibition’s title, “hope against hope,” speaks to a spiritual ferocity nestled in Fahler’s work. The exhibition stages the artist’s willingness to put his trust in the multitudinousness of both ancestral history and of Art writ large against a more conservative kind of hope: the promise of redemption offered in a traditional devotional space. While the personal stories that these works invoke are ones of quiet heroism and American dreams realized, they also reckon with the difficulty of building a life in America as a perceived “outsider”– in all its forms. The queer theorist Eve Sedgwick contends there are ways of engaging with fraught historical narratives that “help [us] again and again,” and that we can, against all odds,“extract sustenance”  from a culture that often feels compositionally inimical to our flourishing. Sedgwick calls this critical position “reparative reading.” I would contend that Fahler’s art is “reparative” (and queer)  in its willingness to deconstruct a timeline that arches towards resolution or optimization and to develop, instead, an ongoing mythology of Self that draws together past and present. 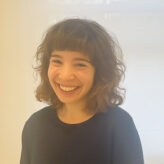 Liz Scheer is a writer and painter based in New York City. She holds a Ph.D. in English from the University of Wisconsin-Madison.