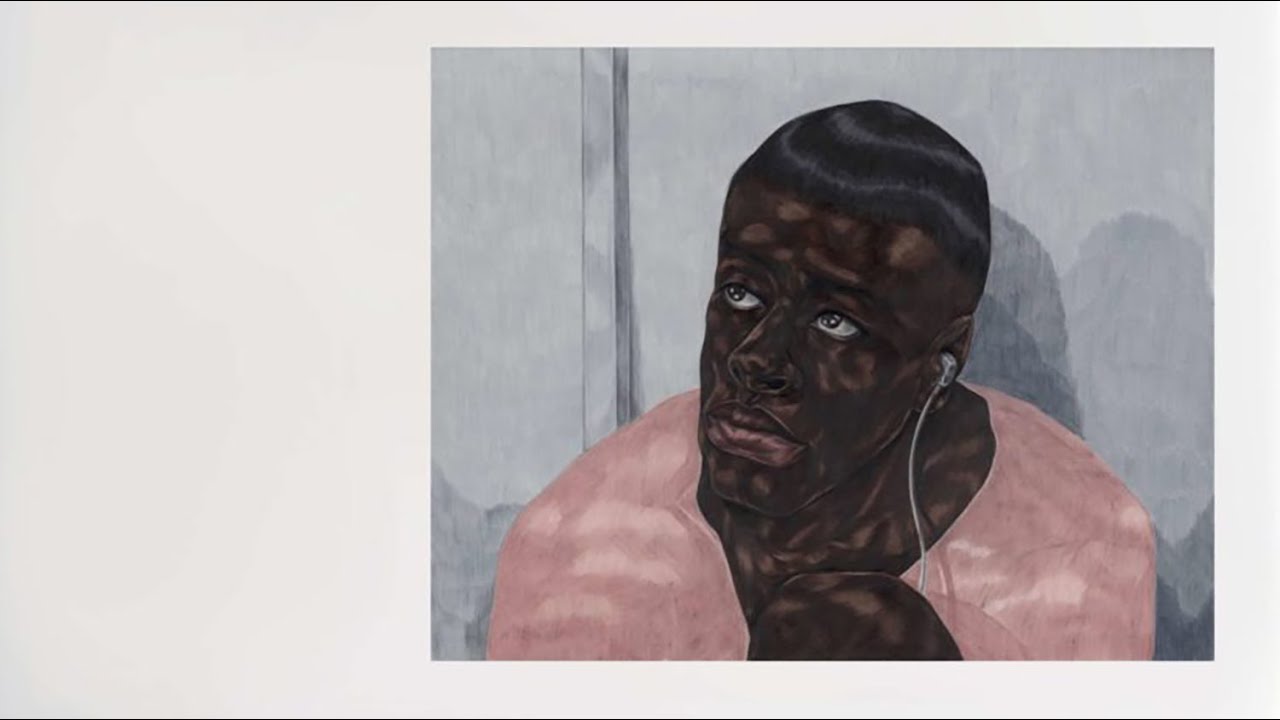 Video walk-through of the show on our youtube channel

All images courtesy of Jack Shainman Gallery and the artist

Jack Shainman Gallery is thrilled to present Tell Me A Story, I Don’t Care If It’s True, a solo exhibition of new works on paper by Toyin Ojih Odutola, at our 524 West 24th Street space.

I go back and forth between wanting to be abundantly simple and maddeningly complex.

When engaging with image-making, suspicions around legibility and interpretation often come to mind. As with the written text, visual language has a set of symbols which can direct a reader to a frame of meanings. For instance, when you hear or read the word, “chair,” a series of images come to mind that represent an object upon which one can sit. Even with more abstract descriptors, such as “love,” one’s emotions and experiences help render a picture. How might this translate in a figurative drawing? Does seeing a picture of a red chair read the same as someone reading that reference? What happens when an image and text work in tandem? What faculties of understanding are needed when a text reads as “chair,” but the image depicts infatuation or a loss of love? Does a third meaning arrive by combining the two? I’m often fascinated with how miscommunications happen and what the imagination conjures in misconstrued spaces—the gulfs between what is intended and how it is received. There’ lies possibility for stories to emerge from within these spaces of missed connections.

With past solo exhibitions, Untold Stories, 2015 (Contemporary Art Museum St. Louis) and Of Context and Without, 2015 (Jack Shainman Gallery), I have tried and failed to explore this fascination serially: the unreliability of how a story is presented via text and/or image, which meanings prevail, and what is conjured from the juxtapositions. Sometimes an image may seem unquestioned, but its title or accompanying text renders it ambiguous. With Tell Me A Story, I Don’t Care If It’s True, I’m attempting to question proclivities towards interpretation and the degrees of bias that effect legibility. The invented stories presented in this series of diptychs and standalone works engage with variables, be they irreverent, painful, humorous, and disturbing—the many facets of life and our attempts to communicate these moments. Contexts here are anecdotal: two teenagers rambling before attending a show, a seductive monologue on a train, a woman presenting a lecture, a man questioning his desires, an encounter with a lifeless body. Whatever came to mind, I wrote and drew them out.

In a time when it seems our priorities are placed on certainty and how to control output amidst a plethora of information that also feels protean and deeply influential, drawing out these vignettes was a means of understanding for me. The works were created using colored pencil, graphite and ink at random, yet seeing them collectively, I sense a yearning. As if, in my attempts at understanding the activity of creating them superseded my intentions; the very conundrum I aimed to solve. Who am I to say what these works mean, but if I present them in such a way as to leave room for others to partake in the translation does that counter the underlying yearning? Exactitude is elusive. Now completed, I’m not where I was when I began the series, but the frame of meaning has tightened. While discussing the series with Reginald Moore, he stated what seems at the crux of this project: “We tend to tell people the things that make us feel better in the telling. It may or may not be what they want or need to hear, but at least we feel better. Is that deceptive or just another means of getting along in the world?” If this is where we gather our truths, then I understand it. In the end, you just don’t know. Sometimes, you have to trust yourself.