Mira Dayal at Spencer Brownstone Gallery
…In that Empire, the Art of Cartography attained such Perfection that the map of a single Province occupied the entirety of a City, and the map of the Empire, the entirety of a Province. In time, those Unconscionable Maps no longer satisfied, and the Cartographers Guilds struck a Map of the Empire whose size was that of the Empire, and which coincided point for point with it. The following Generations, who were not so fond of the Study of Cartography as their Forbearers had been, saw that that vast Map was Useless, and not without some Pitilessness was it, that they delivered it up to the Inclemencies of Sun and Winters. In the Deserts of the West, still today, there are Tattered Ruins of that Map, inhabited by Animals and Beggars; in all the Land there is no other Relic of the Disciplines of Geography. –Suárez Miranda, Viajes de varones prudentes, Libro IV, Cap. XLV, Lérida, 1658.

“…the map would represent a territory inhabited by subjects who in reality inhabit the map”—Umberto Eco, How to Travel with a Salmon (1992, p101)

Based on famed writer Jorge Luis Borges’s one-paragraph short story of a map that’s the size of the empire it represents, Mira Dayal has taken the entire paragraph as the title and the concept for her solo exhibition at Spencer Brownstone Gallery, on view between February 10 and April 4, 2021. Dayal transposed the idea onto the space of the gallery by covering its floor in graphite to map out the entire territory of the gallery, as exactly as possible. The act took about three weeks, with at least 150 graphite sticks.

The purpose of maps is not only for the function of legibility for the sake of wayfinding but also the demarcation of ownership by an emperor or a state. In Umberto Eco’s extended (and funny) examination of Borges’s paragraph-long hypothetical, “On the Impossibility of Drawing a Map of the Empire on a Scale of 1 to 1” in How to Travel with a Salmon (1992), it becomes clear that the absurdist act of creating a 1:1 map of any space is an exercise in futility and megalomania. In no way functional, the original intent of the object to be exact will always fall short of reality and rendered unfaithful almost as soon as it is complete. Dayal’s conceptual takeover of the gallery points this out pithily and poignantly.

We, as participants of Dayal’s work, are what Eco calls the subjects who are inhabiting the map, rather than the represented territory—aka the gallery. Similar to the hyper-awareness of the interior space of Walter De Maria’s The New York Earth Room (1977), not 20 minutes away in a nearby DIA Art Foundation location, Dayal’s Map (40°43’15.0″N 73°59’05.51″W) (2021) embodies the gallery. By taking control of the gallery’s literal grounds, Dayal artistically occupies the gallery, as if to plant a flag upon this land—painstakingly covers the interior gallery floor with graphite.

This act of reclamation by the artist is then released, and controls relinquished to the elements to the other two works of the show: Lips and Twelve Winds (clockwise from north: Aparctias, Meses, Caecias, Apeliotes, Eurus, Phoenicias, Notos, No Wind, Lips, Zephyrus, Argestes, Thrascias) (2021). Dayal installs twelve fans to represent the twelve directions on a compass. Often used on historical maps to illustrate the beliefs of the cartographers and their employers (or better known as the masters of the territory). Instead of being internally dictated, the fans are triggered by actual winds of New York City through Lips, which is a weathervane installed in the gallery’s backyard. This subtle gesture gives over the protection of the map (keeping the graphite from lifting off) and the ownership of “land” to the climate. At the end of the day, humanity is only the subjects of the map, as Eco suggests, without control of the elements. We could only do our best to preserve and guard this precious access we call earth.

In quite the Duchampian gesture, the art is in the concept, not something that could be owned. One could theoretically buy the graphite, the fans, and the weathervane and reinstall the three works. Just as a map is a poor representation of ownership of land, the gesture of commerce is almost meaningless. With works that one could recreate if there’s an inclination, the gallery is stripped of its dealer role, as the ideas are not commodities that could be sold or truly owned once the idea is in the world. The gallery also loses a bit of control over its “land.” As the space during the weeks of this exhibition, planet earth gets to regulate this place, this internal system. By taking over the grounds (visible) and the fans that move the air (invisible) in the space, Dayal recultivates the gallery for the art and idea, and in turn returns control of a small piece of land to nature. 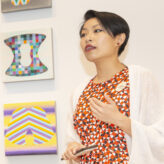 Sophia Ma is an emerging curator. Most recently, she participated in SPRING/BREAK Art Show New York 2020 and interned for the Arshile Gorky Foundation to work on the artist’s catalogue raisonné. For her graduate thesis at Hunter College, CUNY, she wrote about the work and spiritual practices of abstract painter Bernice Lee Bing. Ma worked in development, programming, operations, and administration for the Museum of Chinese in America. Currently, Ma is researching for a manuscript on landscape architecture, which due for publication with Rizzoli New York in Fall 2021.