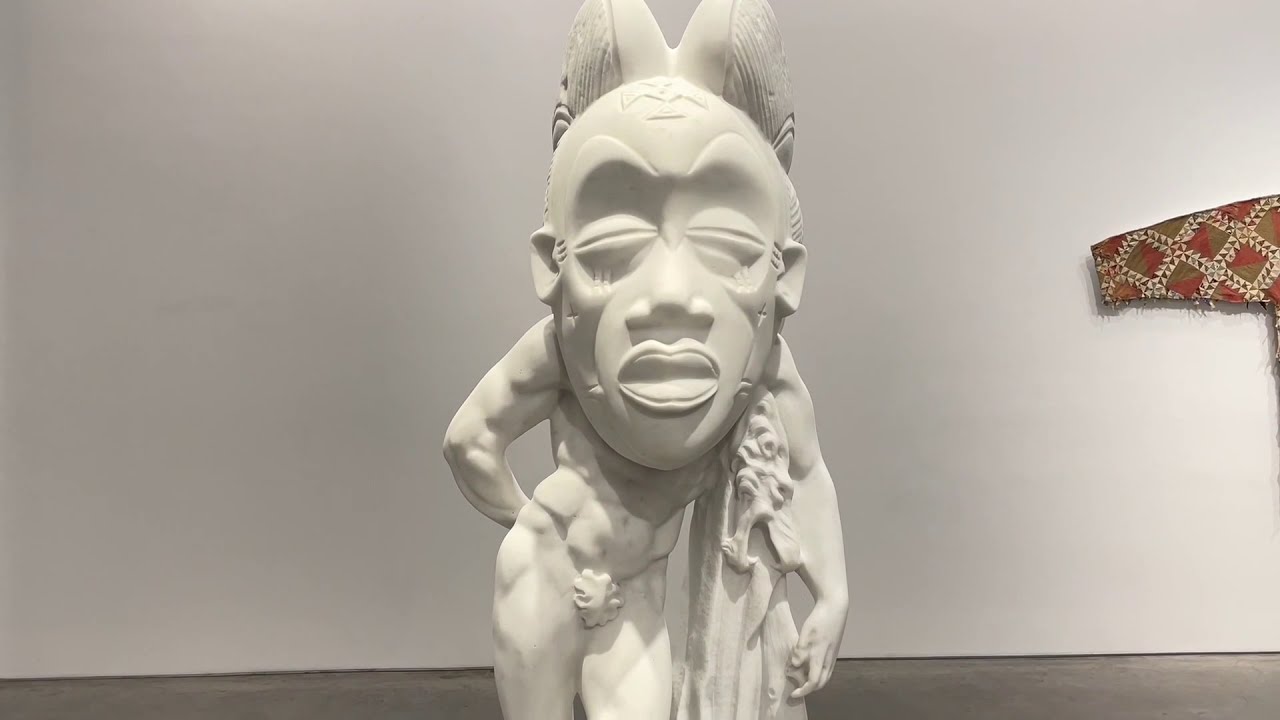 Marianne Boesky Gallery is pleased to present Soft Truths, artist Sanford Biggers’ second solo exhibition with the gallery. With his upcoming show, Biggers delves into the parallels between our experiences with and understanding of Classical sculpture, extending his career-long engagement with aesthetics, cultural narratives, and the body politic. The exhibition will feature a selection of new marble sculptures from the artist’s Chimeras series and quilt-based paintings and sculpture works. Soft Truths will be on view October 30 – December 12, 2020. The exhibition will follow the opening of Biggers’ exhibition, Codeswitch, at the Bronx Museum of the Arts on September 9, which includes approximately fifty of the artist’s quilt-based works.

Biggers’ exceptionally varied oeuvre includes paintings, drawings, sculpture, textiles, films, mixed-media installation, music and performance. Within these diverse works, the malleability of historical narrative serves as a central and connective creative force. In recent years, the body has become more overt in Biggers’ work. In 2015, he created the socially charged Laocoön (Fatal Bert) inflatable sculpture and began his much-acclaimed BAM series through which he re-sculpted African statues with bullets before casting them from wood into bronze, memorializing the victims of police brutality against Black Americans.

Biggers’ newest series in the exhibition, Chimeras, explores how the removal and transformationof both Greco-Roman and African sculpture from their original use and presentation have influenced commonly misunderstood notions of culture and aesthetics to unexpected and often detrimental effects. The Chimeras, rendered in marble, merge African and European masks, busts, and figures into new forms – an emergent state of transformation. Like their namesake suggests, the figures borrow and blend from various sources, giving rise to wholly new creatures that retain vestiges of their pasts, while prompting questions surrounding origins, authenticity and the historical dissemination and appropriation of cultural patrimony that continues into today. Within the exhibition, these works will be presented atop modular, wooden pedestals, further dismantling the Western canonical presentation of marbles as permanent and immobile and establishing a new physical relationship between the sculpture and the viewer.

The fall of empires and the concealed material narratives of Greco Roman sculpture were focal points of the artist’s 2017 residency at the American Academy in Rome as part of the Rome Prize, and inform the body of work on display in Soft Truths. In his Chimeras, Biggers updates the millennia-old practice of recreating canonical Classical and Hellenistic objects by conceptually and formally patchworking them together with a wide array of iconic African objects from the 14th-20th centuries. Using classical and contemporary techniques to investigate these objects’ associated myths and narratives, Biggers presents a “chopped and screwed” critique of Western culture. This year, Biggers was awarded a 2020 Guggenheim Fellowship by the John Simon Guggenheim Memorial Foundation and plans to focus this fellowship in part on expanding the Chimeras series, further pushing the aesthetic and conceptual concerns of these works.

Of this new work, Biggers says, “I am intrigued by recent scholarship that posits that many of the iconic white, monochromatic marble sculptures we are familiar with were originally painted in brilliant, even garish color. For me, the false perception of these unintentional monochromes as authentic intersects with the early 20th-century “black-washing” of African works, through which hundreds of objects were stripped of all material adornment and any ritual and cultural residue. The Chimera sculptures challenge the washing away of history in both cases and acknowledge the impact this revisionism has had on nationalistic propaganda, cultural understanding and the relationship between the West and the rest of the world. The works themselves are dense with fertile references that make them anomalous, deceptively beautiful and complicated.”

In the quilt-based works, which Biggers has created and evolved for more than two decades, the artist dismantles and reassembles found antique quilts through painting, drawing, stitching and restructuring.  Again, through this patchwork process, he becomes a late collaborator, contributing to a textile-exquisite corpse and engaging formally across time with the individuals who originally created them. These works carry imprints of the individual body as well as communal experiences, as quilts hold a deep symbolism within American history, particularly in their mythic use as signposts on the Underground Railroad. Biggers’ singular vision and approach to these textiles form the basis for the survey at the Bronx Museum, and several new quilt-based works will be included in the gallery show.

Highlighting this practice, Biggers will present one of his largest sculptural cube quilt works to date in Soft Truths. Taking over a corner space of the gallery, the new work is comprised of pieces of antique quilts, reassembled and then adhered to a three-dimensional plywood cube structure. The resulting work reimagines the quilt patterns in a new context of the sculptural geometric form.

“Through my practice I have sought to create artworks that begin with the formal but continue to resonate into the conceptual and experiential, becoming nodes for individual and communal engagement. This approach inverts the subject and ground relationship by inviting the viewer to challenge their own ideas and preconceptions of the work, activating the physical and psychic forces within an installation that is charged and embedded with historical meaning and auratic presence,” says Biggers.