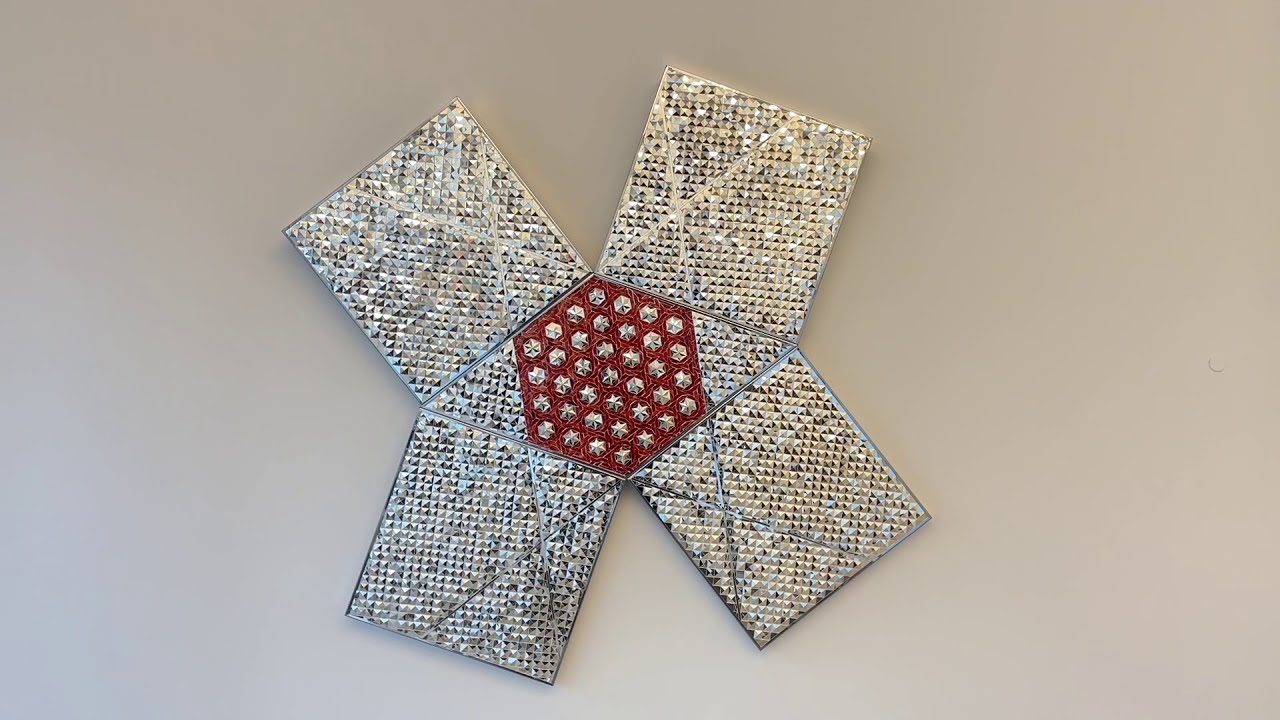 Over six decades, Monir Shahroudy Farmanfarmaian (1922 – 2019) investigated the intricate geometries of her Iranian heritage, reconfiguring traditional craft techniques to explore the philosophical, poetic, and perceptual possibilities of interlocking primary forms. Tied to a mystical understanding of shapes as sacred and connected to a divine natural order, her unit-based compositions reveal uniformity, repetition, and precedent as the basis for endless recombination. This exhibition brings together major mirror-mosaic works and related geometric drawings from Monir’s prolific period following her return to Iran from New York in 2004.

Monir is best known for her geometric mirror-works, in which cut polygonal fragments of reverse-painted, reflective glass are arranged into kaleidoscopic compositions grounded on principles of Islamic geometry. She often grouped her work into series she called “families,” suggesting a familial affinity of form, dimensionality or structure between works in each group. Blending influence from classical Persian decoration and Western minimalism, each familial series begins with the sacred fundamental form of the triangle and progresses through the remaining seven regular polygons in Euclidean geometry. Each unique sculpture within a given family is anchored by central, multi-sided linear shapes, whose features define an infinitely outward-spanning tessellation of form.

Inspired by a formative visit to the mirror mosaics of Shah Cheragh mosque in Shiraz, Iran, Monir’s sculptures draw from the mathematical, corporeal, and mystical principles of Sufi architecture as much as they are informed by 20th-century abstraction. By marrying Eastern ideas of transcendent repetition with Western modernist concepts of seriality, modularity, and permutability, Monir sought to “play with ideas of infinity.” In her work, rigorous structure and recurrence are the foundations of invention and limitless variation. This is evident in her series of convertible sculptures, for example, each of which is composed of individual segments that can be assembled in myriad patterns.

Drawing was an integral throughline in Monir’s wide-ranging practice. The Islamic Revolution marked the beginning of her 26-year period of exile in New York. During this time, drawing reinforced a vital sense of continuity and connection to her homeland. Following Monir’s return to Iran in 2004, her sculptural practice was reinstated and her drawings engaged more directly with three-dimensional space, providing a means for experimenting with geometric and architectural structure.

Nothing is done spontaneously; it is all a calculation of geometry and design. If you divide a circle at three points, it will be a triangle. In Islamic design the triangle is the intelligent human being. If you divide the circle at four points, it will be a square, and it can be North, South, West, and East. Each element has a meaning in Islamic design. The five sides of the pentagon are the five senses. The six sides of the hexagon are the directions: forward, backward, right, left, up, down. The hexagon also reflects the six virtues: generosity, self-discipline, patience, determination, insight, and compassion. All the mosques in Iran, with all the flowers and the leaves and curves and so on, are based on hexagons.