To mark the end of the year and this decade, here is a recap of some shifts in our cultural climate.

Our society seems to be operating on a high level of sensitivity, creating many rapid changes in our social and contemporary culture. It has been a year of art activism with many contemporary artists voicing their criticism and concerns on our current society.

Nan Goldin has been globally recognized for her campaign against the Sackler family, demanding the most prominent museums to decline Sackler donations and to take down their family name on gallery walls. With her unstoppable energy and persistence, she succeeded in getting the National Portrait Museum London, Tate Modern and other major institutions to cut ties with the family. Goldin entered ArtReview’s “Power 100” as the second most influential artist of 2019.

This year’s Whitney Biennial was another example of artists protesting against the leadership of an institution when eight artists withdrew their work from the exhibition. The Whitney Biennial is one of the most important accomplishments for an emerging artist, often creating worldwide recognition for the artist’s work. Yet before the opening of the exhibition, one artist, Michael Rakowitz, declined the invitation due to the museum’s association with Warren Kanders, whose companies distribute military equipment, including teargas that was allegedly used against migrants on the U.S. border and unarmed civilian protesters in Gaza. After a week of VIP opening exhibitions, seven other artists requested the removal of their artwork from the gallery walls and demanded the Whitney to disassociate itself from Kander.

As a society, we believe our current government is ignoring some of their responsibilities in protecting the earth, this has led us to take more individual actions. It has also resulted in the fabrication of some brilliant artistic collaborations and activations in the past years. Many designers and artists have collaborated with scientists in exploring new art mediums that continue to innovate and inspire. There is an overall message demanding us to take more responsibility for our actions, and with the focus to create awareness with our consumption and waste.

One leading figure in this movement is the artistic duo Studio Drift, who pushes the boundaries of material use and find inspiration in nature and technology. Recently, the art collective created a new piece for their “Materialism” series, one made out of 3,000 plastic blocks, each representing the plastic used in an individual supermarket bag sold in Amsterdam. Studio Drift also proposed a roof created from recycled plastic for Notre Dame, inciting many designers around the world to imagine other creative, environmentally-friendly options for helping to rebuild the cathedral. Vincent Callebaut proposed a roof that generates energy and food, and Miysis Studio proposed a roof made out of glass to create a greenhouse.

The growing interest in art within the tech industry stands parallel to the growing interest in the art within the luxury industry. Artists have always been at the forefront of innovation and imagination. Creation is limited to the imagination, and therefore artists are of the utmost importance to this process. Branded collaborations and sponsorships are celebrated rather than frowned upon. This is a result of the growing inclusivity of art circles, as well as growing criticism against that of the wealthy private donor. In return, brands are seeking to align themselves with stories that are culturally relevant. These developments are creating a perfect partnership between the two industries. Art fair weeks such as ABMB are a clear example of this where many brands consign artists for installations and art activations.

There was strong criticism towards the incompletion of art-historical collections this past year as well. Museums across Europe and the United States are turning their focus to expanding and completing historical art collections by acquiring native artwork in addition to works made by artists of color and female artists. This does not only apply to contemporary art, but also to complete the gaps in past decades and centuries. Artists such as Kehinde Wiley and Titus Caphar are prominent leaders in this movement. These artists have continued to create monumental work that reveals the faults and incompletion of the history books. This past year, Kehinde Wiley created his first public sculpture “Rumors of Wars” that was revealed at the end of the summer in Times Square, New York. The sculpture was purchased by the Virginia Museum of Fine-Art and moved to Richmond, Virginia in December of 2019. “Rumors of War” is a large 30-foot bronze sculpture of a young African-American male dressed in streetwear clothing sitting on a rearing horse. The work is created in direct response to the confederate sculptures that populate the United States, and their role in preserve the incomplete narratives and contemporary inequities.

Besides the collective effort of restoring the historical record, there has been a noticeable effort to recognize diversity in the contemporary art world. Artists of color are a growing focus in the art market, and institutions are responding by curating shows that reflect this. Artists such as Amoako Boafo and Simphiwe Ndzube are on the rise and had a strong presence during ABMB week. The reopening of MoMA has shown a substantial shift in the presentation of contemporary art. Unlike earlier narratives of the museum, MoMA’s permanent collection and temporary exhibitions now show a large number of female artists and artists of color who were overlooked in the past. Additionally, markets for young, female artists, such as Judi Curtis and Loie Holloway, have grown exponentially, supporting this rising trend in female artists and artists of color.

Art will always be a pure reflection on concerns relevant to our community, and artists will continue to call out the wrongs within the world. The past years events have provided proof for the relationship between the power of art and the power of the people. There is a collective awareness demanding the necessity of change, that allows us to grow and define the new decade ahead. 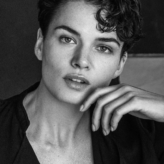 ANNE VERHALLEN IS A NEW YORK-BASED CURATOR, WRITER, AND ARTIST AGENT. BORN AND RAISED IN THE NETHERLANDS, SHE STARTED HER CAREER AS A HIGH-FASHION MODEL WORKING FOR SOME OF THE MOST PROMINENT PHOTOGRAPHERS, ARTISTS, AND DESIGNERS. IN HER WORLD TRAVELS AND THROUGH MEETING MANY PIONEERING ARTISTS AND INDUSTRY LEADERS SHE DEVELOPED A STRONG INTEREST AND CURIOSITY FOR ART AND CONTEMPORARY CULTURE. SHE IS CURRENTLY THE FINE-ART MANAGER AT CREATIVE EXCHANGE AGENCY AND AN INDEPENDENT CURATOR SEEKING TO CULTIVATE THE INTERSECTION BETWEEN ART, DESIGN, TECHNOLOGY, HEALTH, AND LUXURY FASHION.