Sometimes, it is best to just let the art speak for itself. That seems to be the closest thing to an underlying theme in A Composite Leviathan, on view at Luhring Augustine’s Bushwick space until December 21st. Beijing-based curator James Elaine (alumnus of the Hammer Museum and the Drawing Center) has brought together a diverse group of twelve emerging artists from China in this ambitious showcase of new talent from the other side of the globe. It is rare these days to see a straightforward group show in a commercial gallery setting without some sort of underlying theme; if one had to ascribe a theme to this show it would be something about the relationship of these artists with the “Leviathan” of the Chinese state, and its complex relationship with contemporary art (see Ai Wei Wei). However, to do so would be to miss the point. Despite the limitations of space, Elaine manages to convey a sense of comprehensiveness. Leaving the show, this author felt that he had learned something about what was preoccupying this new generation of Chinese artists.

When you enter the exhibition, you are greeted by the show’s titular piece, a massive sculpture by Yang Jian made of bent pipes and incongruous sculpted metallic animals that dominates the space. Every other work is organized in terms of its centrality in the main gallery. While this work and his wall sculpture A Black Square by Malevich and A Quasistationary Distribution Figure from the Essay Consensus Through the Influence of Committed Minorities seem to be the intended stars of the show, I found my gaze drawn away from the center of the gallery, and to the corners. Wu Di’s Golden River and He Wei’s No. 135 are framed wonderfully by Yang Jian’s sculptures in the back right corner, and upon closer examination reveal quiet moments of beautifully warm shadows which contrast with the harsh light and white walls of the gallery.

The second floor presents a much more intimate setting and allows some of these works to speak without being drowned out by the more vocal works downstairs. Liu Dongxu’s Light Light Light elegantly hinges both parts of what otherwise might be an awkward upstairs space, guiding the visitor around the corner to look upon Wu Di’s 9-23, my favorite work in the entire show. Photographs fail to grasp the effervescent glow coming from the canvas, emerging from the charcoal grey of its ground. Directly across is another painting by He Wei, this time rendered in a potent spectrum of electric blue. The second floor feels much more focused and intentional than the first, which seems to be trying too hard to “sum up” a generation of artists, a seemingly impossible task in a nation of over a billion people. More than anything, A Composite Leviathan contains many beautiful things, a rarity in this contemporary art world and certainly worth a visit. 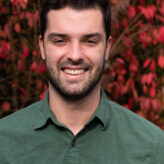 Jonas Albro is an art historian, critic, and curator based in Brooklyn. He is currently an MA candidate in Art History at Hunter College and received his BA in Art History from James Madison University in 2017