“Her use of video and found footage, her editing and image processing are groundbreaking…. This is our visual language.”
-Eva Respini, Barbara Lee Chief Curator, ICA, Boston

Marian Goodman Gallery London presents an exhibition of works by Dara Birnbaum, with special focus on her large-scale video installations from the 1990s. 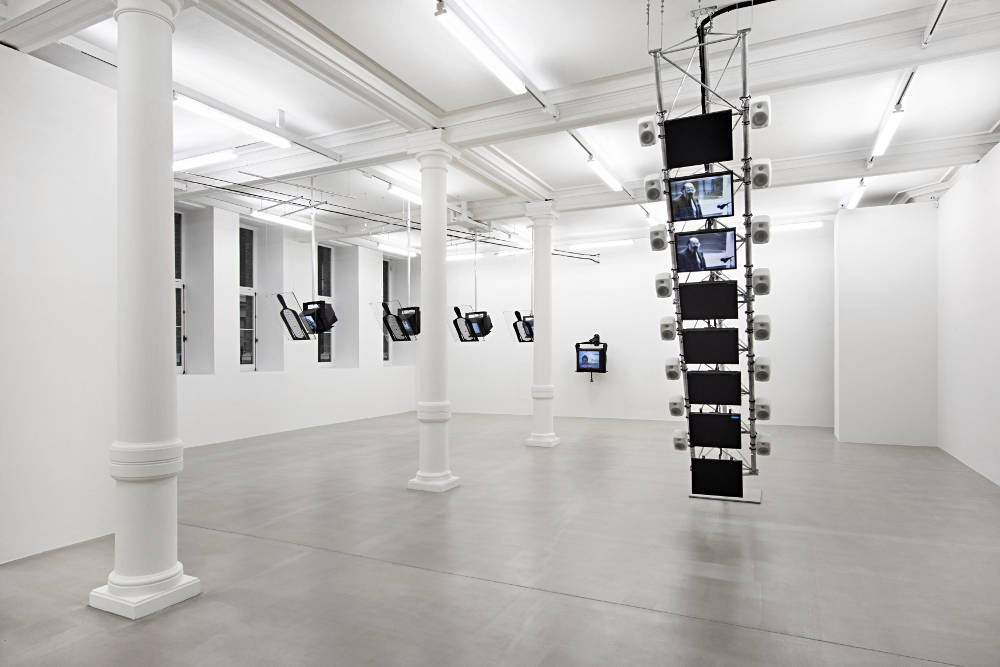 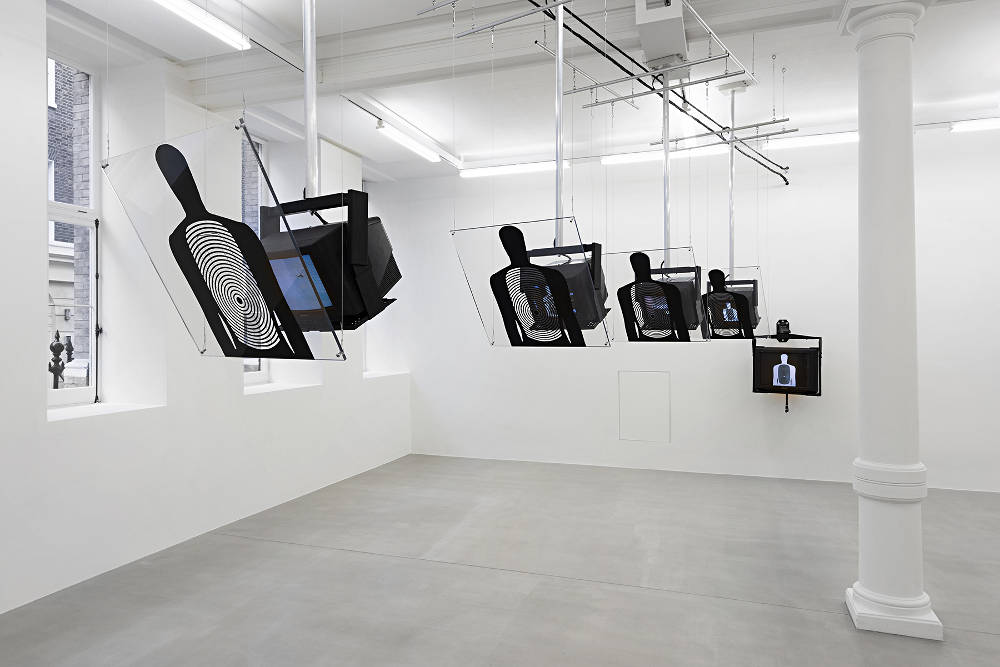 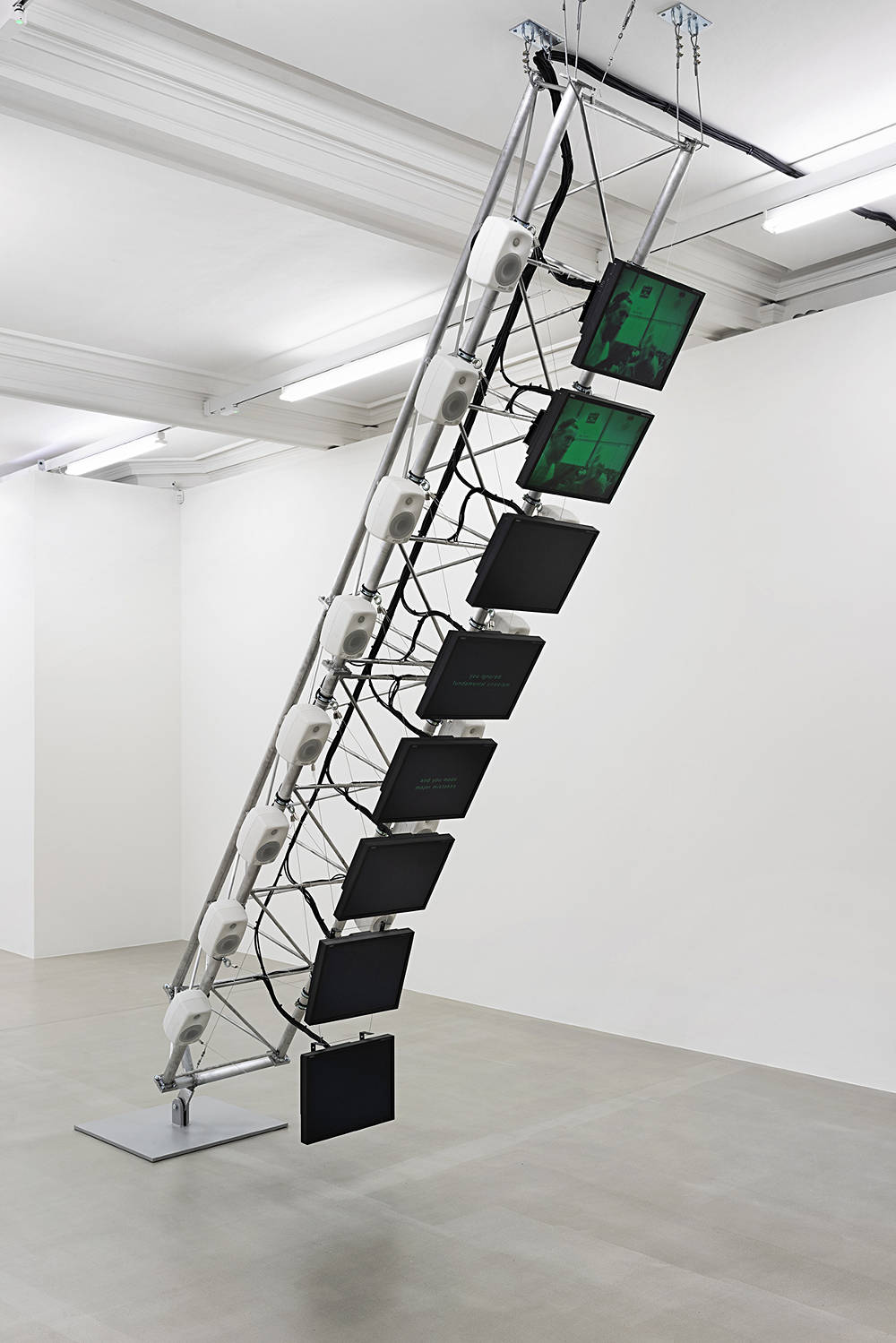 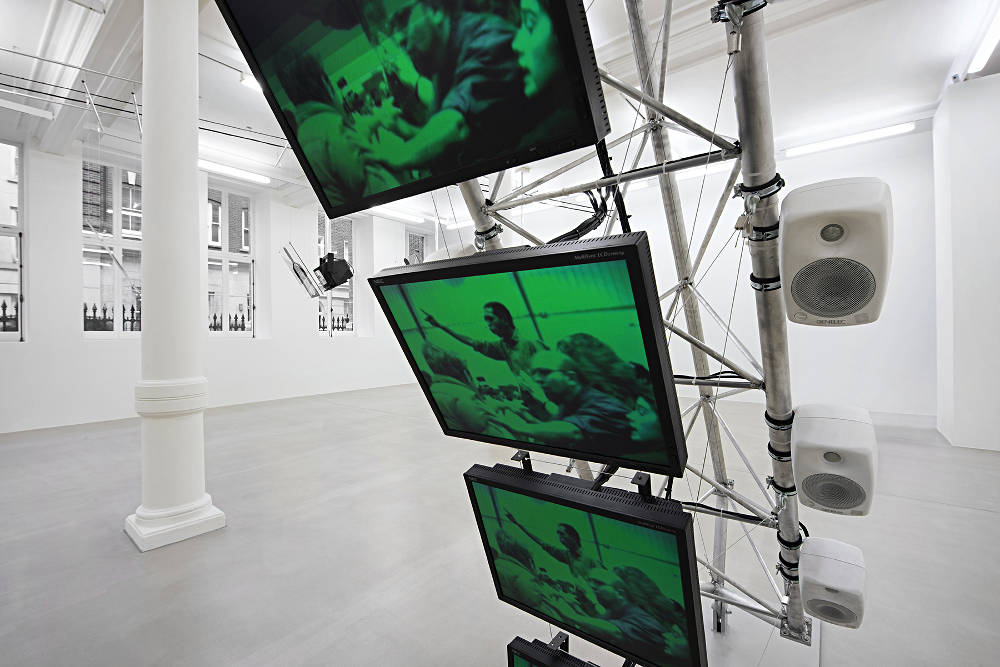 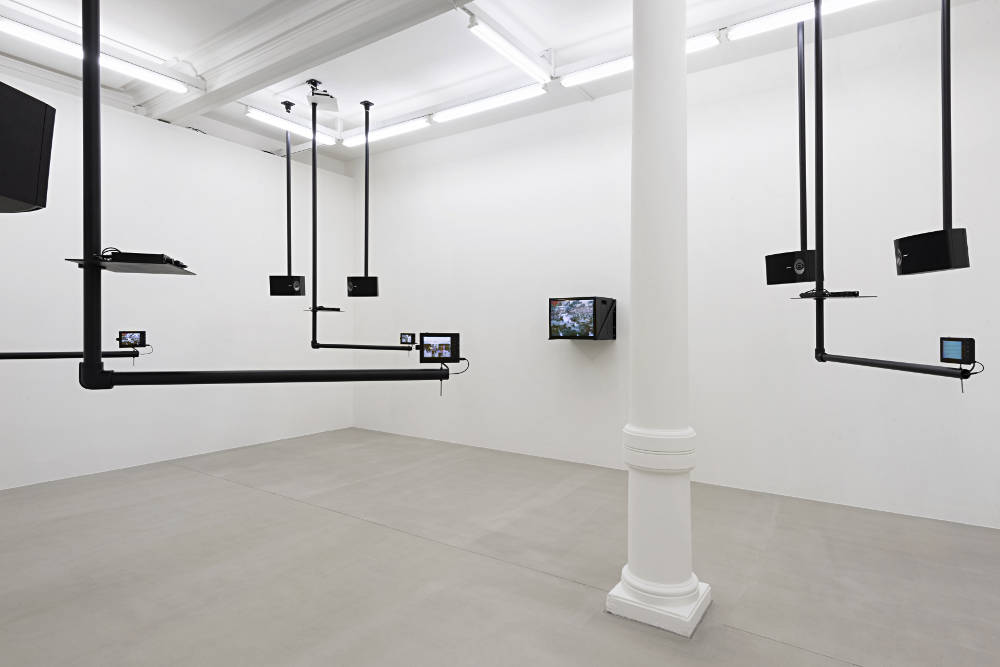 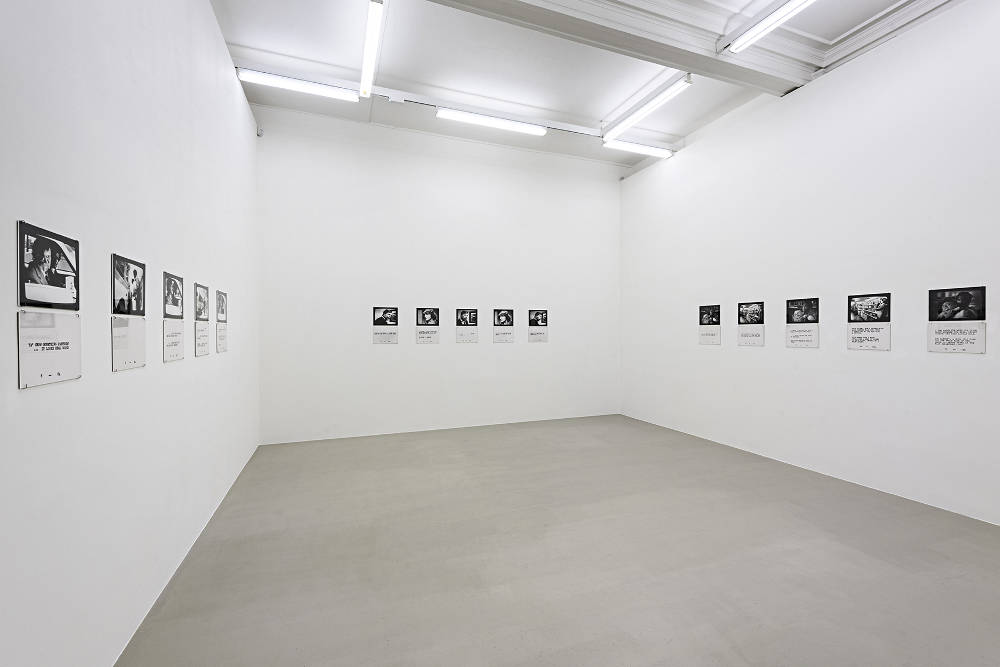 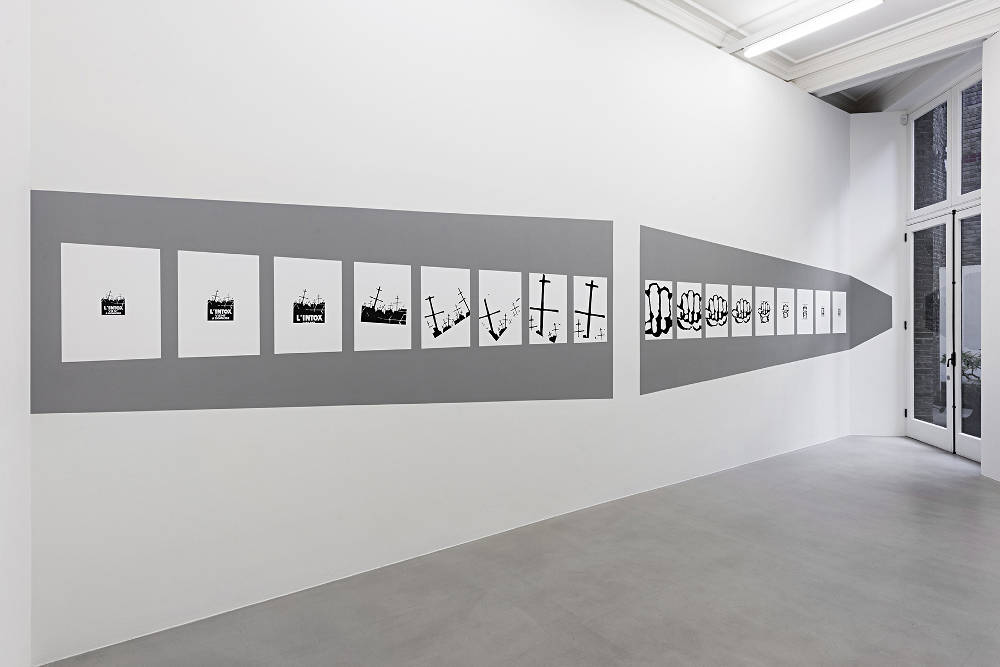 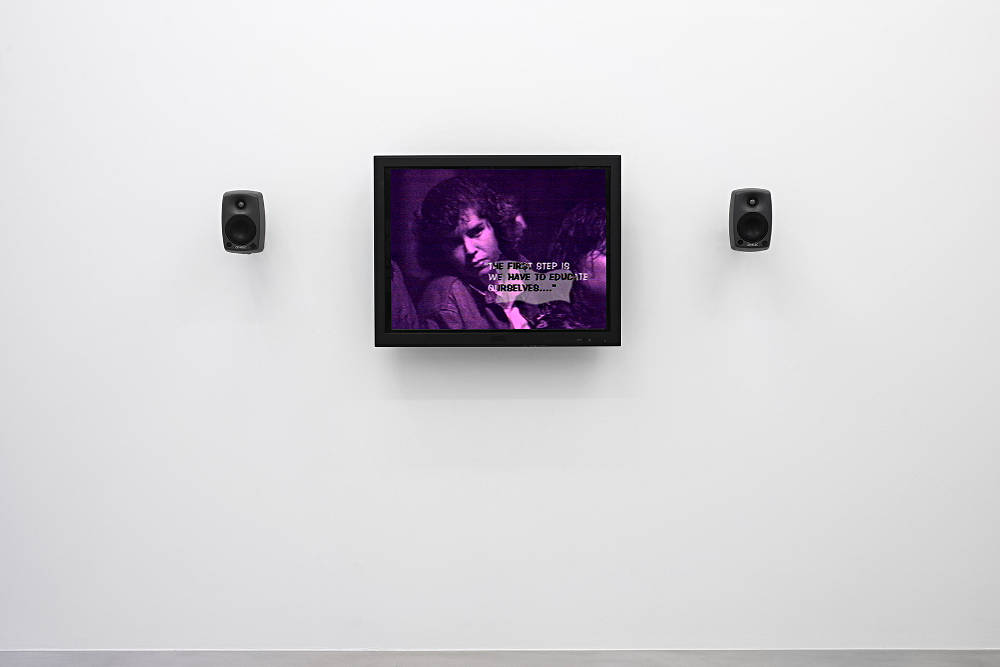 Installation view of Canon: Taking to the Streets

Birnbaum’s practice has long been concerned with the lexicon of broadcasting and communication and the way ‘truths’ are delivered to the viewer. An early proponent of video art, Birnbaum began by isolating imagery from television, recontextualising it in an attempt to understand its true meaning. For the first time since her major 2009/2010 travelling retrospective, The Dark Matter of Media Light, the three works Tiananmen Square: Break-In Transmission, 1990, Transmission Tower: Sentinel, 1992 and Hostage, 1994, are shown together. All three pieces were made in response to major political events in the latter part of the 20th century, as a way to uncover the complex relationship between the media, the events covered and the way in which those events are presented to the public. On view in the side galleries is a selection of two-dimensional works focusing on the anonymous street posters from the May 68 protests in France, as well as the series Lesson Plans (To Keep the Revolution Alive), 1977, which formed the basis of the artist’s first exhibition, at Artists Space in New York in 1977.

Tiananmen Square: Break-In Transmission plays out on multiple channels, following coverage of the student-led uprising in Beijing in the summer of 1989. Organised into four sections that hang from the ceiling, the screens and audio speakers dispersed throughout the space, each channel depicts a different event from the demonstrations as sourced from original news footage. The clips range from a performance of a song written by Taiwanese sympathisers, to the censorship of CNN and CBS international broadcast news, which had been documenting the protests. A fifth larger monitor plays back a randomly generated programme of images pulled from the other displays, through the use of a hidden surveillance switcher. The purposefully small screens demand the viewer to get physically close to the images being generated, meaning that they miss the events that are going on elsewhere.

Transmission Tower: Sentinel, constructed out of real sections of a transmission tower and mounted television screens, addresses the power of rhetoric. Footage of Allen Ginsberg reciting his anti-war poem, Hum Bom!, plays out on the line of screens. In contrast, footage of George H.W. Bush giving his presidential nomination address descends the monitors, evoking the arc of a falling bomb. Birnbaum contrasts Ginsberg’s emphatic and raw recitation with Bush’s highly scripted speech. Birnbaum also recorded a 1988 National Student Convention attempting to establish a cross-country political platform against Bush’s re-election. These images climb up the tower, in opposition to the falling images of Ginsberg and Bush.

Made after the 1993 attack on the World Trade Center, Hostage depicts the kidnapping and eventual murder of Hanns Martin Shyleyer by the far-left militant organisation known as the Red Army Faction (Baader-Meinhof Group) in Germany in 1977. Constructed from six monitors, each channel shows a different aspect of the media coverage surrounding the event, from depictions of the RAF in the news, to footage of Schleyer’s forced televised speech and the U.S. media’s newspaper reactions to the unfolding events. Fixed in front of the monitors are firing range targets, acting as partial screens to the actions. When a viewer aligns with these targets, they themselves are targeted and the footage of the newspaper reportage halted by an inactive laser beam.

On view in the two side galleries are the works Lesson Plans (To Keep the Revolution Alive) and Antenna/Fist, 1992/2018. Lesson Plans, one of Birnbaum’s earliest exhibited works, juxtaposes extracted stills from television programmes with text of the exact dialogue of the characters and serves as a precursor to the artist’s subsequent investigations into the syntax of broadcasting. Presenting five popular prime-time TV series from the late 1970s, Birnbaum looks to interrogate the methods by which editing is used to create tension on screen, specifically through the use of reverse angle shots.

Antenna/Fist appropriates imagery from anonymously created street posters made during May 68 in France. These personal commentaries, relating messages of protest, sit opposite the video Canon: Taking to the Street, 1990, documenting a 1987 Take Back the Night march at Princeton University. These personalised experiences show the demands of street or public protests, which allow for -and even foreground .the individual’s right to be heard and understood amongst unrest and violence.

A viewing area comprised of a selection of Birnbaum’s early single-channel works, provided by the Electronic Arts Intermix, New York, will also be on view on the ground floor of the gallery.

Dara Birnbaum (born in New York City in 1946) received a Bachelor of Architecture from Carnegie Mellon University, Pittsburg, a B.F.A in Painting from the San Francisco Art Institute and a Certificate in Video and Electronic Editing at the Video Study Center at the New School for Social Research, New York.

Birnbaum currently has a commissioned work on view at the critically acclaimed Michael Jackson: On The Wallexhibition at the National Portrait Gallery, London, until 21 October 2018. The Memorial Art Gallery at the University of Rochester, New York will be unveiling a new three-channel video commission by Birnbaum on 13 April 2019.