Every once in a long while, a body of work is exhibited that is so inspired and outstanding one can hardly find the words to describe the experience. For this writer, such an event took place more than two decades ago, in 1995, at the National Gallery of Art in Washington, DC, which gathered for display a majority of the very small number of extant paintings by Vermeer, one of Western painting’s greatest visionary realists. The cumulative effect of the encounter was astonishing in its technical achievement and its emotional depth. For those of us lucky enough to see the exhibit, professional or not, the visual experience was unforgettable, beyond words. While Manuel Neri, the 88-year-old Mexican-American sculptor who is the subject of this review, has not established for himself the general esteem audiences have for Vermeer–it would be hard for anyone to do that today–Neri nonetheless deserves immense respect for his remarkably lyrical, highly considered figurative, sometimes painted sculpture–always of a woman standing or sitting–and of his equally accomplished works on paper, which treat similar themes.

Neri is best described as a poet who happens to make sculpture. The noun is qualitatively different in its implications (indeed, in current culture, poetry is often treated with disdain!) from estimations that emphasize greatness at the expense of subtlety. It speaks to a sensibility that emphasizes sensitivity rather than the establishment of a deliberately major mode. How Neri’s sensibility originated seems to be slightly mysterious, but then it is close to impossible to tie an outlook or style to a particular origin in the life of the artist.

The beginnings of Neri’s life were unsettled: his parents left Mexico in the wake of the Mexican Revolution’s turbulent change. But Neri seems to have adapted himself quickly to an academic artistic career. A student at the California College of Art and Crafts and the California Institute of Fine Arts (now the San Francisco Art Institute), Neri also took a course in ceramics with Peter Voulkos, the noted clay sculptor. Other well-known artists who taught him were Richard Diebenkorn and Elmer Bischoff. In response to what looks like an inspiring education, and after a time spent painting abstract expressionist work, Neri began making the female plaster nudes he is recognized for (he has worked with the same model, Mary Julia, since 1972), and often painted parts of the body, emphasizing the artist’s concomitant interest in painting–at one-point Neri was strongly interested in abstract expressionism. But he quickly turned to the plaster figurative works, which make up the excellent Yale University Art Gallery show now on view in New Haven.

The exhibition, which also includes a number of excellent two-dimensional works, enables Neil’s audience, which should be much larger than it is, to meditate on the beautiful figurative studies that the show presents. Today, figuration in sculpture has a decidedly mixed reputation–abstract art tends to hold sway, especially in New York. But then it cannot be said that Neri’s work is entirely figurative–by isolating parts of the body, as in the remarkable work titled Shrouded Figure (1960), made of wood, plaster, wire, and burlap. The figure is simplified and truncated: the head, featureless due to a cloth draped over her head and shoulders, merges with the torso, suggesting the presence of a shroud. The left leg and arm are missing. A gray area occurs in the middle of the front of the body and moves down into the crotch. Certainly, the form is immediately graspable as a figure, but the absence of limbs also pushes it, even if only slightly, toward the realm of abstraction. By eliminating such things as features and simplifying forms, Neri was able to find abstraction in the body’s representation, something inevitably available in any figurative form but particularly visible in the work done by Neri.

Neri’s gifts might seem antiquarian today, given an overtly sexualized, anti-romantic esthetic–Neri’s figures are sensuous without being openly erotic. We also reject deliberate beauty quite consciously. But something highly current is found in Neri’s work, even if his choice of figuration is not greatly esteemed (although it does seem to be coming back). Additionally, his working with plaster shows us how so time-weighted a material can be remade into something holding truly contemporary form, the current lyricism of Neri’s intelligence being abiding. Even though the art in the show is surrounded by a historical aura, in the sense that the work stays close to the long, long history of figuration, it is also true that its painterly effects and gestural lyricism link it directly to the art of the abstract expressionists, relatively recent forebears. Neri’s strengths must not be described as scholarly, although his art possesses a strong element directed toward the past. But neither do the statues commit themselves to an avant-garde adumbrated by the intellect. Indeed, the amount of feeling in the sculptures and paintings is remarkable. Practitioners of contemporary art, now heavily intellectual and anti-idealist, might well pass by this work, but it would be a great mistake, for Neri is keeping figuration alive–even if it needs to be done in an isolated fashion.

Re-Making of Mary Julia No. 6 (1976) is a wonderful work, in which the plaster figure of the woman sits on a wooden chair. The nude figure sits upright, unclothed, with her arms extended so that her hands rest on the top of her knees. The chair itself bears the marks of the creative process; a thin film of plaster covers its seat. The face and torso have been painted and are chipped and gouged, giving a degree of roughness to an otherwise superbly harmonious form. One remembers that the plaster medium, in Neri’s hands especially, is a means that is inherently attractive. It would be easy to characterize the work as a mere academic exercise, but the unspoken lyric aura surrounding the piece is genuine, if invisibly experienced. Neri’s pursuit of a poetic gravitas is evident throughout the work, so that the seated figure presents emotion that is memorable, despite the fact that her face lacks features, where we usually find emotion; the work is, on a formal level, highly conventional; and her modesty of presence emphasizes the subtlety of feeling.

Head of Markos (1963) is an excellent study of a head, supported by a thin pole roughly a foot high. The head is slightly Cubist in its making, with deep-set eyes and traces of color, mostly brown and gray. It manages to present both a traditional figurative facial structure and cubist leanings in the head’s facture at the same time. Something of the person’s masculine, forceful character comes through–this despite the fact that plaster’s whiteness seems to register emotion and personality-less effectively than clay. Whatever the reasons for this wonderful piece, it stands out for its autonomy of feeling and for its vigorous modeling. Mujer PegadaI Maquette for Marble Relief–VI (1983) is a standing woman seeming about to walk away from the wall support to which her back is attached. Only partially extricated from the plaster that extends like an aura a few inches beyond her body, the sculpture feels very much like it is in conversation with the classical Greek tradition. This work shows Neri at his best, being classical, modern, contemporary, and timeless. In fact, the viewer nearly feels like he is being faced with a figure redolent of the Greek religious mysteries. Gravitas is a quality that is unusually given and hard to earn, but perhaps in this work of art both events have taken place.

Mary Julia’s Passion (1973) is a strong work on paper of Neri’s model, nude in fully frontal fashion. Painted a brownish gray, with a black pubis, the figure lacks features and limbs, but manages to convey force of purpose. The dark tones of the ground behind the figure–gray edging off into black on the upper left of the painting–look highly expressionist and link the artist to the time when he was working in this manner. It is a forceful assertion of desire–given the title, presumably on the model’s part, but also on the part of the artist and his audience. Any portrayal of a nude will carry an erotic charge, even if it is only a hint of one. Lyricism, whether in poetry or art, no matter whether the art is figurative or abstract expressionist, implies the existence of desire, both in the artist and what he has made. Neri’s astonishingly beautiful work–the phrase is accurate–treats the female nude like the icon the naked woman has become across Western art history. His execution may not touch upon the current discussion of gender, but it elaborates on a long tradition central to our art history. The people who see the show must not forget the historical implications of work like this–as suggested above, Neri didn’t stray very far from Western traditional art. But that does not mean that he lost his feeling for the contemporary, or that the model has been reduced to merely to a symbol either erotic or mystical. His achievement, then, has been to work within seeming boundaries of iconography, only to move past them with quickness, skill, and defined emotion. It is hard to ask for more. 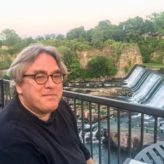