“Harmony Hammond: Inappropriate Longings,” currently on view at Alexander Gray Associates, offers the thrill of trespassing through abandoned property. Each piece features the residue of secret histories–stories of desire, violence, perhaps even death–that may never be known but survive through the detritus of life left behind. There’s something forbidden in this work, and a physicality that suggests intense connections between bodies and the built world, between blood and soil.

The show’s title comes from a large, mixed media installation of the same name. Anchoring the exhibit, “Inappropriate Longings” features a triptych of panels covered with old wallpaper and linoleum siding. A battered old gutter is tacked on at one end. The panels themselves are ordered by color, the first a vivid ochre, the second a dark crimson, the last a patchwork of grays, deep browns and withering beige, suggesting the passage of time through the life cycle of leaves in fall, and the remains of a neglected old house.

In front of the triptych is a rusting metal trough filled with and surrounded by dead leaves scattered on the ground. The full weight of the piece doesn’t arrive, though, without a close inspection of the panels. “GODDAMN DYKE” has been hastily carved into one of them, an alarming intrusion of violent thoughts and action at once queering the space and making evident the threat certain bodies face in rural America. Directly in the center panel, a small red dot drips like blood from a bullet hole.

The unnerving quality achieved by “Inappropriate Longings” continues, albeit in more muted form, in “Untitled #1.” Here Hammond presents a bundle of straw tightly packed into a small, sodden-looking square. The piece is graced with red stains along the fraying edges, recalling the blood from “Inappropriate Longings” but in an entirely different manner. Here it seems to have seeped out from underneath, as if the straw itself were a battered body, the wounds recent but starting to dry and crust over.

The possibilities for pleasure find sharpest focus in “Untitled (Form of Desire).” Hammond has affixed a shock of blonde hair–the end of a ponytail–to beat-up pieces of Congoleum vinyl that ooze clear liquids between their cracks and conjoinments. The juxtapositions in this work are many: light and dark; vital femininity against drab masculinity; youth and old age. For Hammond, the ponytail acts as a totem of sexual attraction even as it attached, literally in this case, to the rough stuff of heterosexual male desire.

Other pieces in the show are less immediately tied to the themes pursued in Hammond’s most forceful work, but are engaging on their own. In “Small Erasure #3,” one piece in a larger series, Hammond douses the pages of official correspondence from an unidentified artist in red ink. The letter itself, apparently issued by a law firm, warns Hammond strongly against including the firm’s client in her landmark study, Lesbian Art: A Contemporary History. Hammond’s response, a playful redlining of the text, hardly detracts from the stakes involved.

On her personal website, Hammond reflects on the difficulty of persuading lesbian artists to cooperate with her research. “While some of their reasons were more understandable than others, in the end, they are all part of the problem. Through their chosen self-erasure, they contribute to the ongoing cultural erasure of lesbian art and artists…The point is not to guess who the letters are from but to underscore the chilling effects of self-erasure, and to presence these artists in their absence.”

Hammond, by contrast, is fully present in her work. In these paintings and mixed media installations, Hammond’s creative energies bravely confront issues of sex and sexuality, and the attendant violence that often meets them in unwelcome spaces–whether they be the pastoral outposts of the American countryside, a court of law, or even one’s feelings about their own identity. It’s a testament to the strength of Hammond’s approach that while all the pieces in this show were realized more than twenty years ago, they still find urgency today. 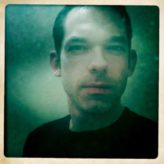 Michael Busch is a New York City-based writer and educator, and is Senior Editor at Warscapes magazine.