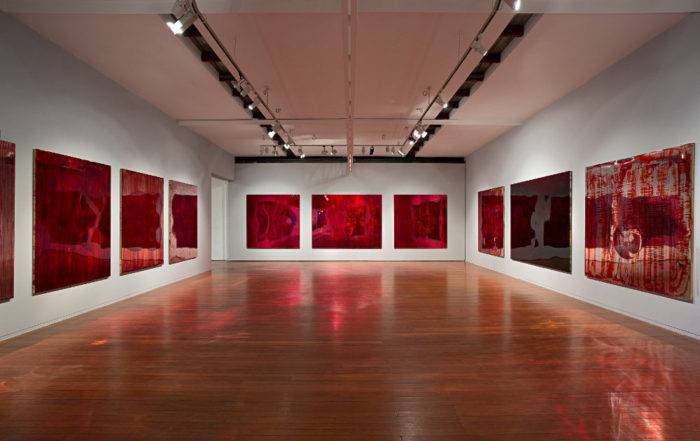 I like that painting can seduce, that the content can be provocative, sublime, and aggressive at the same time. You never know what you are looking at.

The reflective surface is like escapism; it shows the image of something that happens somewhere else. The work in its pure form, it could be said, exists only when you are NOT looking at it. In a way you never know what the work is, conceptually speaking.

I disagree with the idea that artworks exist only insofar as they are available for human viewing. Artworks tend to be more interested in pointing out how they exist, act, and “live” beyond the realms of human perception, a paradox of sorts given the contrived nature of artworks.

My work observes the society it exists in, that we live in. Everything is individualistic, we are trapped in ourselves. As soon as you enter into my work you are trapped in the reflection of your own gaze. 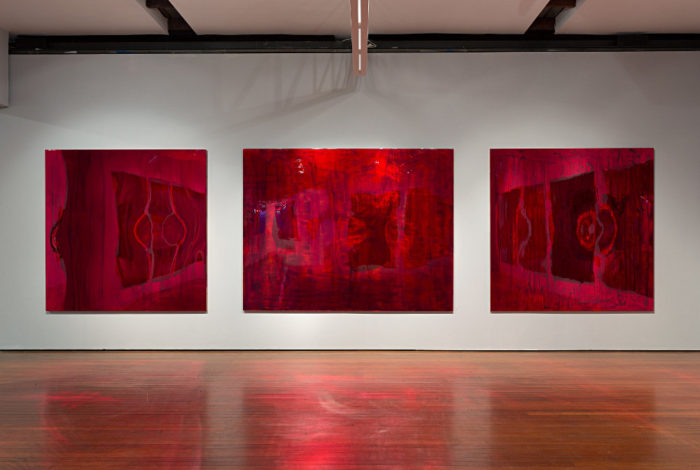 In some ways the viewers reflection is not only trapped but also not real, you see a bit of yourself but not completely. The real image is their twisted distortion, like they are on the way to erasing themselves, blocking any type of communication.

The truth, the solution, to what the work is about is that there is no way out; the work offers us only a reflection of our gaze into this reality.

The premise of conceptuality has always been the invisibility of Art, the immateriality of Art. But at the end of the day, Art comes through the eyes, you have to sense it, look at it.  Too many artists around us today “charge up” their art with nostalgic quotation about a concept or a material. I much prefer activating these concepts and materials in the present context.

I prefer contradiction. On the other side there’s the image and the seduction expressed through form and image. I like the idea of two ideas that oppose each other, but that when put together create a kind of tension, a passion within the work that releases a “new” charismatic beauty.

You cannot talk about an artwork reduced to its parts or its materials, nor can the discussion of an artwork be reduced to its creator’s life, it cannot be reduced to some other context, no matter how defined. Art is Charisma, pouring out of anything whatsoever, the image, the look, the connection, the touch, the gaze, the feel. In all discussions of Art we tend to ignore the “pull”, the force emanating from Art, the Charisma – “that beauty”. The charismatic pull off the art object, an image, on its viewers, a property any object can possess in the right context. Contemporary painting produces reflective situations that show art in a light that is constantly new and changing. The meaning of the painting is therefore not transparent but latent. 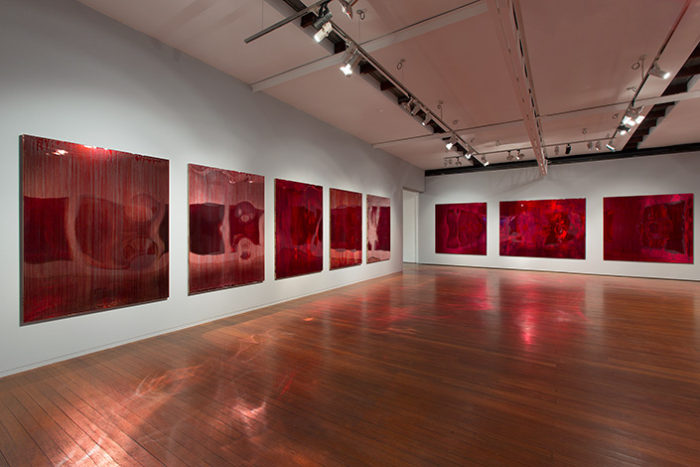 Trump’s “alternative facts” reflect the contemporary nature of “alternative beauty” in Art. Nothing stays the same for long anymore. Almost everything is almost continually influenced by almost everything else. So there is a fundamental flaw in the notion and assumption of fixed meaning.

Painting should formally create a kind of schizophrenia among the mediums and aesthetics, an “Abstract Conceptual Schizophrenia” of sorts. Painting doesn’t have to speak.

The meaning of a painting cannot be taken directly from the gesture itself. My work is about activating itself in the present context that it both illustrates and is perceived in.

Painting today must live with its own contradictions, in the ugliness of its own beauty, and in the beauty of its own impossibility.

Dale Frank is one of Australia’s foremost contemporary painters.  Frank’s work has been included in major exhibitions, such as; ‘Shut Up And Paint’, National Gallery of Victoria (NGV), Melbourne, Australia (2016), ‘Dancing Umbrellas’, curated by Sue Crammer, Heide Museum of Modern Art, Melbourne, Australia (2016), ‘Lurid Beauty: Australian Surrealism and its Echoes’ at the National Gallery of Victoria (2015) and ‘Luminous World’ at the National Art School, Sydney (2016). Frank was included in the 2014 Adelaide Biennial of Australian Art: ‘Dark Heart’ at the Art Gallery of South Australia, curated by Nick Mitzevich.  In 2013, his work was featured in ‘Personal Structures’ at the Palazzo Bembo as part of the official program of the 55th Venice Biennale.  He has been included in three Biennales of Sydney (1982, 1990 and 2010) and he was selected for the important survey exhibition, Contemporary Australia: Optimism at the Queensland Art Gallery | Gallery of Modern Art, Brisbane (2008). A major solo retrospective of his work was held at the Museum of Contemporary Art, Sydney in 2000. In 1983, Frank was included in the exhibition ‘Panorama della post – critica: critica ed arte’ at the Museo Palazzo Lanfranchi in Pisa along with Thomas Lawson and Anselm Kiefer. In 1984 Frank was included in the Aperto section of the Venice Biennale and Junger Europaischer Maler (Young European Painters) section in the exhibition, ‘Europe-Amerika: 1940 to the Present’, at the Museum Ludwig, Cologne. Frank’s paintings are held in every major public collection in Australia as well as museums worldwide, including the Museum of Fine Arts, Boston, the Solomon R. Guggenheim Museum, New York and the Kunsthaus, Zurich. A major monograph on Dale Frank’s work So Far: the Art of Dale Frank 2005-1980 was published in 2007. Dale Frank has been represented by Roslyn Oxley9 Gallery since 1982.