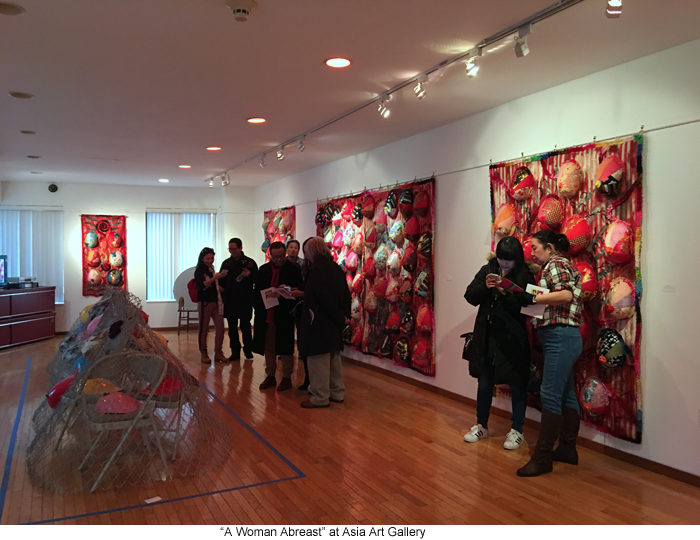 Zhen Guo’s show, “A Woman Abreast” and major installation, Mother (2016), at an attractive non-profit gallery in Flushing, Queens, read like a summation of current Chinese feminist art. Born in the Mainland, educated at the China Art College in Hangzhou, Guo came of age as an artist during the Cultural Revolution in China, surely a test of her moral strength and spirit. Now a mature artist, she moved to New York in the middle 1980s. At the time, she was married to the well-known installation artist Gu Wenda, but the ten-year relationship failed. The artist records this difficult period with a series of harrowing self-portraits, emphasizing her vulnerability and depression. In part, because of this experience, and because, it may be surmised, of her long, now permanent stay in America, she has become a pronounced feminist artist. She is moving toward the international presentation of her work; in recent years, Guo has begun going back regularly to China, where she is becoming known for her works of colorfully decorated breasts. This work must act both as a recognition of her personal experience and as an assertion of the pride of gender.

In the current climate, America regularly wishes to emphasize the public political value of personal suffering. Still, as ubiquitous as such thinking has become, it is relatively new; feminist art here dates back to the 1960s. It must be emphasized that Zhen Guo does not belong to this particular history but has in fact borrowed from it to create a personal, politicized language celebrating her identity as an Asian woman. Art in China did not truly invent a feminist art of its own until recently; Guo can be seen more clearly in light of this development. Her show asserted a literal connection between the breast and a woman’s right to publicly identify with her gender in art. At the same time, the bright colors of the breasts suggest a tie with Chinese popular culture, earlier and now. This double assertion—of the American penchant for baring one’s chest (in Zhen Guo’s art, quite literally) and the recent initiation of gender-based art in China—is not easily established, or taken in, because the cultures remain so different. Even so, many ambitious and now well-known female Chinese artists have spent time in America, either as students or independent. 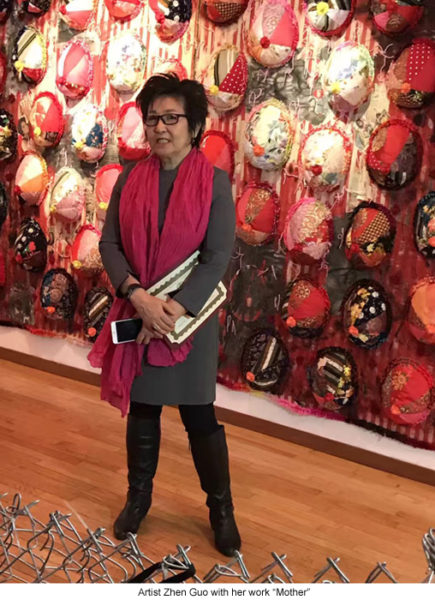 Politics aside, the show presented a riot of colors, resulting from the differing choice of fabrics used to construct Mother and other works, while the shapes of the breast and nipple were uniform. The installation occupied an entire wall of the long, narrow gallery; the soft sculptures hung in rows of four or five across, in eight lines vertically, on separate panels. Usually made in sections of red and pink fabric, the breasts displayed communicate an aura of intense physicality, even as their isolation as a body part rendered them slightly abstract (modest Chinese viewers have compared them to hats). In another installation, located on the floor of the gallery, an open-wire construction contained breasts made of porcelain-like, shiny lacquered Papier-mâché resting on folding chairs; a number of them were attached outside the metal construction, hung from the wire itself, and a few had a number of line drawings, often of women and mythical creatures. Rendered in different colors, the hard breasts reflected the lighting of the gallery, while the nipples stood out prominently on their aureoles. In another, smaller wall installation, four large punching bags supported fabric breasts, mostly in red and pink, but also fitted out with sections of orange and white and colorful patterns. The sheer number of all these mammaries—their corporeal intimacy—was a bit overwhelming, but the point was made, indicated by the conflict between the male-associated violence of boxing and the soft breasts covering the rigid bags.

In the announcement for the show, Guo put out a highly Warholesque image: four photographs of herself arranged in a squared format, one of her looking away, and three of her laughing or grimacing, against colored backgrounds of yellow, red, mauve, and green. This group of self-portraits announces the Americanization of her psyche in its high expressionism. Yet the artist also remains deeply Chinese, both in person and in aspects of her art, in particular, its alignment with folk culture. In the work See You (2017), Zhen Guo attaches a large pink breast to an even larger circular mirror, which reflects the contents of the gallery space. In Western culture, the mirror is often associated with vanity, in particular, the vanity of women. But in this work, the artist uses the reflection to move beyond herself, including her works of art and the people visiting the exhibition. The import of the sculpture actually exceeds difference in gender or culture; it asserts its feminism generally. This show will travel to Shanghai, the Changshuo Art Center, in March and surely will demonstrate both the artist’s drive and deep commitment to the equality of women in the country from which she came. Indeed, the show’s public import, as well as its private relevance to the artist, is evident from the start. We can no longer easily talk about the dissimilarity between an Asian and a Western viewpoint in work like this; the contrasts have become more nuanced and subtle. Guo’s compelling art proves that women artists from all over the world are pushing for a feminist presence in cultural expression, needed still in a mostly male art world. 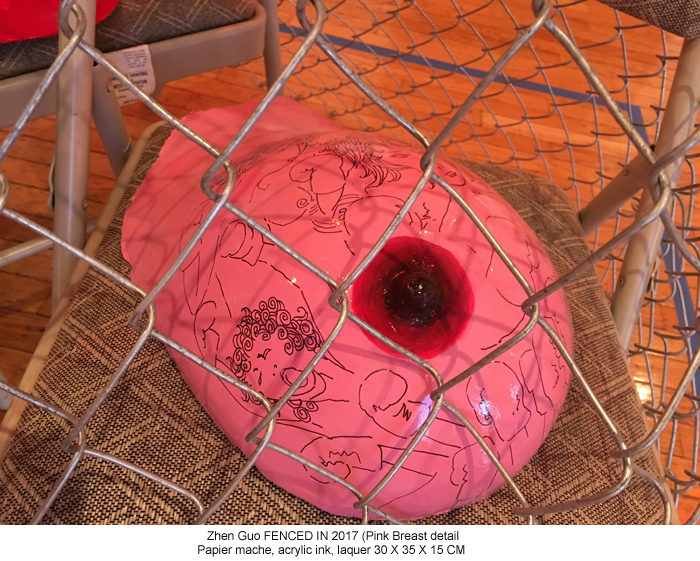 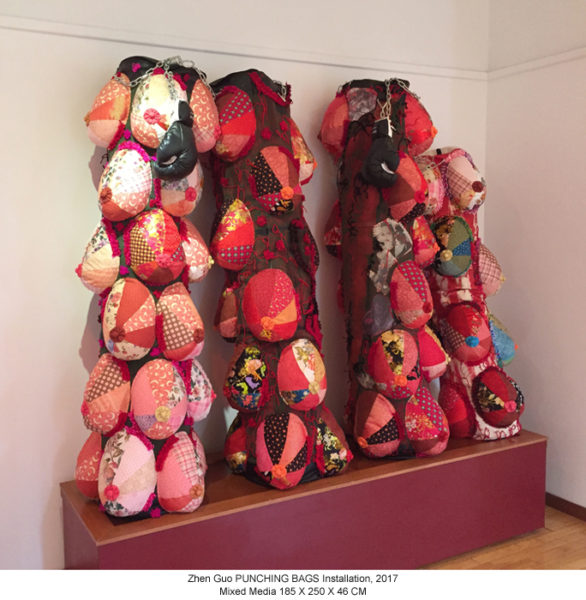 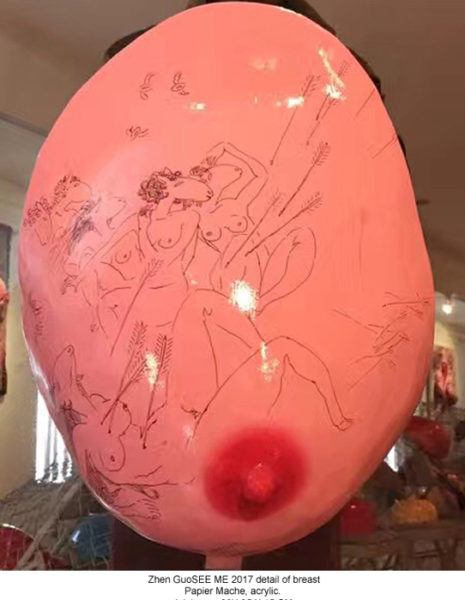