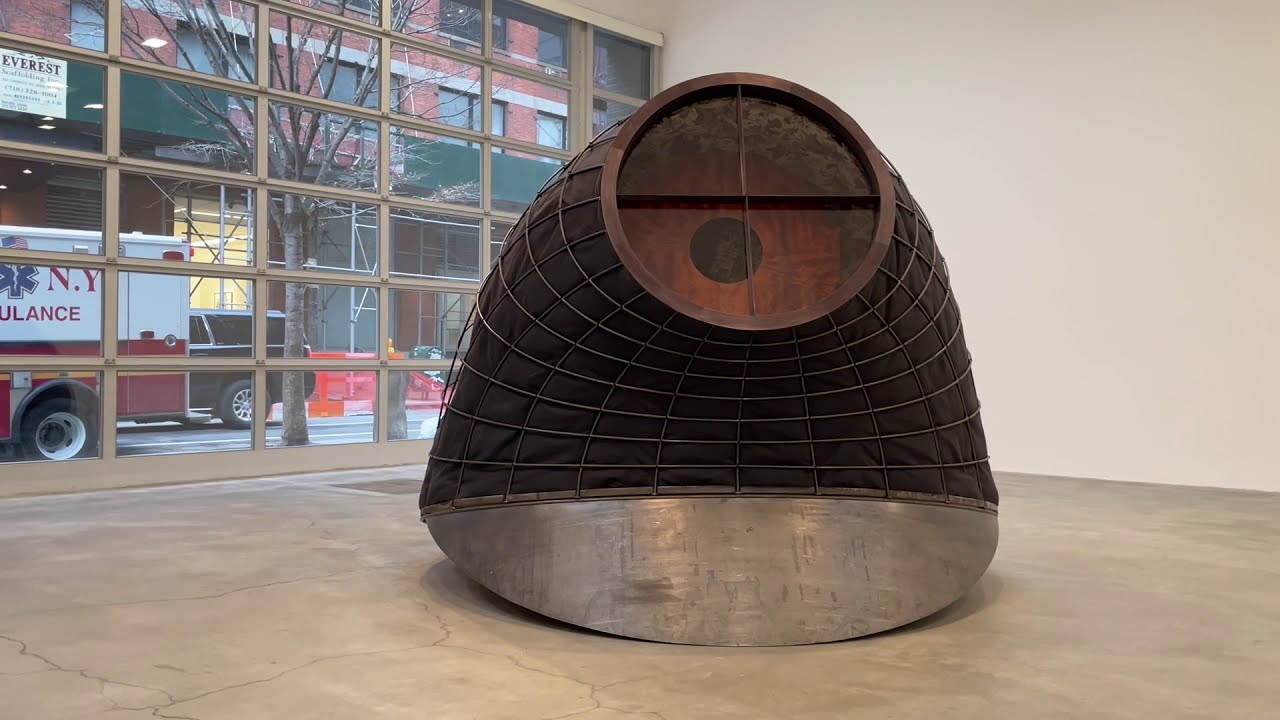 Matthew Marks is pleased to announce Martin Puryear, the next exhibition in his gallery at 522 West 22nd Street. The exhibition includes six sculptures made in the past three years, all of which are being shown in New York for the first time.

Tabernacle (2019), more than six feet tall, resembles a cap of the kind worn by soldiers in the Civil War. Through openings in its steel-and-fabric construction one can see its interior, which houses a depiction in wood of a Civil War cannon, its barrel holding a cannonball-size mirrored sphere. Puryear has said, “I think of interior space as a world with enormous conceptual potential, an important aspect of sculpture.”

The bulging latticework shape of Aso Oke (2019) is modeled on a different kind of headwear, a Nigerian hat made from traditional handwoven cloth. After sketching the form, Puryear built a seven-foot-tall pattern in rattan and twine, which he then cast in bronze. Similarly, the bronze sculpture Happy Jack (2020) began as a large vessel made from tightly woven willow stems. Five feet tall, its shape evokes a monumental human chest and shoulders with a headless neck, which is stopped up with a large cork.

In the wall-mounted Hibernian Testosterone (2018), a cruciform of American cypress supports an animal skull sprouting enormous antlers, which Puryear has cast in aluminum and painted white. They belong to the Irish elk, an extinct animal once common across Ice Age Europe, whose antlers were the largest of any known deer species. The pair in the sculpture, which Puryear has reproduced at actual size, span almost twelve feet. They are a magnificent form but also, as the title implies, an absurd display of masculinity, one that biologists say contributed to the species’ demise.

Puryear was the US representative for the 2019 Venice Biennale, and several of the sculptures in this exhibition were first shown in the United States Pavilion there. The base of A Column for Sally Hemings (2019) is fluted like the Pavilion’s Doric columns, which, like its domed rotunda, were directly modeled on Thomas Jefferson’s neoclassical mansion at Monticello, his Virginia estate, where Sally Hemings was enslaved. Carved from wood and painted white, the sculpture’s base tapers at its top like the waist of a skirt. Set into the wood is a cast-iron stake culminating in a ring, a form that first appeared in Puryear’s work in the 2014 sculpture Shackled and again two years later in his monumental outdoor sculpture Big Bling, installed in Madison Square Park in New York.

Martin Puryear was born in Washington, DC. In addition to the Venice Biennale, his work was featured in the Bienal de São Paulo and Documenta 9. In 2007 the Museum of Modern Art in New York organized a large-scale survey of his work, which traveled to the National Gallery of Art in Washington, the San Francisco Museum of Modern Art, and the Modern Art Museum of Fort Worth. In 2015 the Art Institute of Chicago organized an exhibition of fifty years of his works on paper, which traveled to the Morgan Library in New York and the Smithsonian American Art Museum in Washington.