All images courtesy of Arsenal Contemporary and the Artists

The ongoing show This Sacred Vessel (Pt.3) at Arsenal Contemporary looks at a still life as an artistic method of engagement with non-living or living things, an attempt to look at existence from aside, from an ontological point of view. Instead of focusing on the actual jars, vases, or apples, twelve artists look at the hands, the symmetry of plants, the passage of time, mimicry, solitude, and nostalgia. Through the works, we arrive at a contemporary narrative structure, a collection not unlike a cabinet of curiosities, but of more recent origins.

Samantha Rosenwald and Stephanie Temma Hier add delightful and unexpected strokes to the subject of mimicry and, its opposite, unmasking, thus forming conceptual parameters for all other works on view. In Rosenwald’s “Slit,” an eloquent drawing on canvas, a sumptuous watermelon changes its identity to adhere to its environment or perhaps an environment is undergoing that change, adapting to a predatory looking fruit. While Stephanie Temma Hier’s ceramic snakes and mushrooms refuse to be confined to their small premises, unmasking and leaving behind traditional still life subjects (clams, a bunch of salads) painted with oil.  All other works vacillate between this opposition and full acceptance.

Among the most eloquent works on view are Peter Dreher’s six cups, part of his wrestling match with permanence and legacy as he painted one glass per day as part of his cycle “Tag um Tag guter Tag” (Day by day good day), accumulating over 5,000 paintings since 1974. Connecting old-fashioned contemplating of Morandi with post-World War II anguish and desolation these glasses are the artist’s attempts at finding peace and purpose.

In contrast to this very straightforward masculine attempt at finding solace, Swiss Louisa Gagliardi pokes fun at us by showing that bodies can also be part of still lives. Vast lonesome and nocturnal canvases by Kenny Rivero are contrasted by the affective and pastiche lovesickness of Greg Ito. Symbology of color plays a significant role for both of these artists, thus underlining their approach to narrative in highly subjective and emotional terms. Canadian Vincent Larouche is presented with a few canvases that nostalgically all portray pre-digital technology. By adding nostalgia to the presented emotions Larouche completes the circle. Only the past is better than the present. The future is as uncertain today as it ever was.

Overall the exhibition presents a very eloquent portrait of where we currently are as a society, wavering between mimicry and stand-off, wallowing in the nostalgia of good pre-digital times, and looking at meaning outside of ourselves. Yet, the human connection here again seems to be the answer to the existential angst. Hands of Greg Ito’s two canvases ground the viewer, giving her a slight reassurance. Seemingly it is up to us to decide whether they are fruits of lovesick nostalgia or dream of tomorrow, but either way, this is the narrative, the story we want to go home with. Objects as narrators tell a good story, with honesty and without fuss. 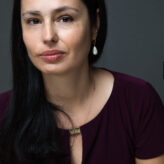 is Georgian-born and New York-based art writer and curator. She is author of the book "King is Female: Three Artists from Georgia," published in Berlin by Wienand Verlag in 2018. As a researcher and a feminist writer Nina is interested in power hierarchies as well as in uncovering largely underexplored narratives in the US, Eastern Europe as well as Caucasus. More of her articles and reviews could be found here: www.ninamdivani.com