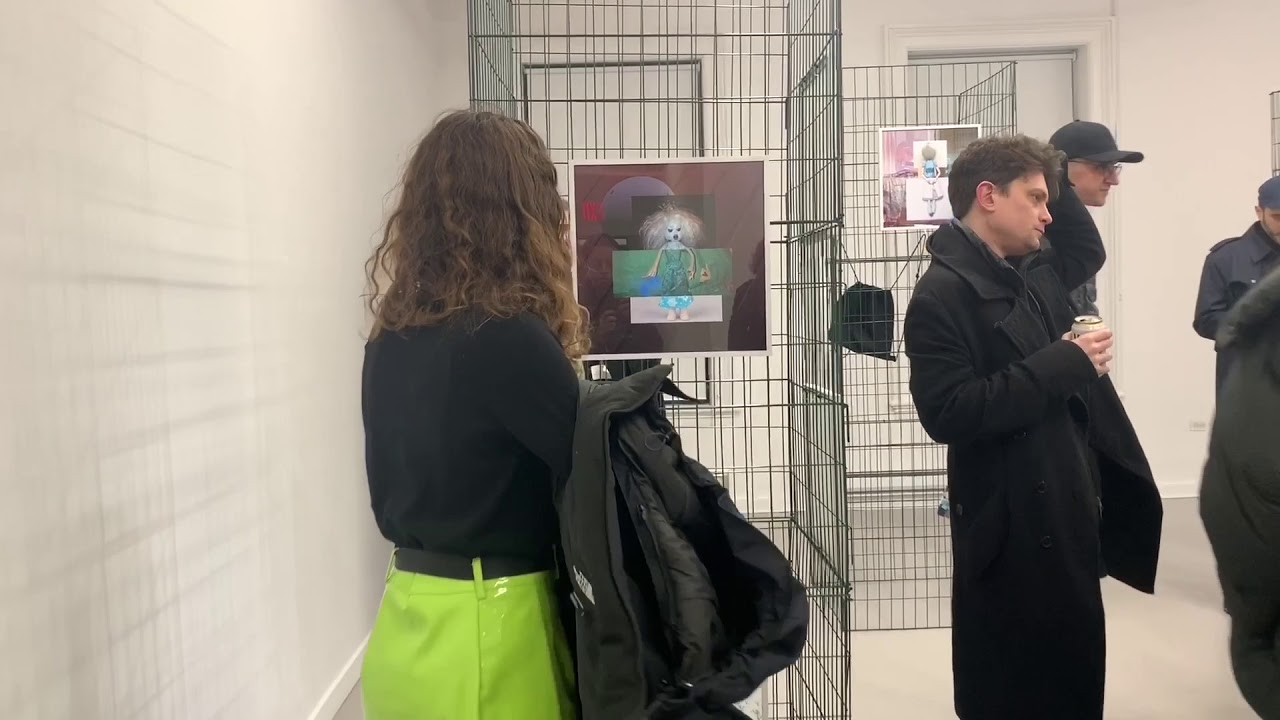 PR: Have you heard of Gatebox AI? A Japanese take on Amazon Echo that features a hologram of the virtual bride, Azuma Hikari —“I look forward to living with you, master!”

In Rubber Breasts Willing to Bring Teacups and Roll Away Fire and Bombs Fahrenholz remixes content found online. Even the title is a reassembly of Sylvia Plath’s The Applicant. A poem in which a man is interviewed and groomed before he is offered a wife who is both a loyal servant and a “living doll” — an obviously impossible combo. Might as well rely on a hologram bride in a box that doubles as your alarm clock.

For the new works Fahrenholz scoured websites like Etsy and Alibaba for images of dolls of the ice queen Elsa from Disney’s Frozen. Elsa doesn’t really fit into narrative stereotypes, especially those of Disney. She has no suitor, except for maybe Anna, her spunky sister who spends much of the two films searching for her. But despite her low libido, Elsa went viral. Sites like Etsy are saturated with Elsa ephemera — wigs, clothes, toys and dolls.

Elsa’s lack of romantic interest also fanned rumors online that she is Disney’s first gay character, albeit a closeted one. Through her virality, she has exceeded the Frozen narrative and broken free from Disney’s corporate command. However, Elsa may have found herself in a new type of prison — one of unregulated reproduction. She has become an icon, a repository for all types of libidinal projection, when what she actually desired was to be more human, to rid herself of the icy powers that are her curse but also, as she learns in the first film, her individuating blessing.

Fahrenholz takes images of Elsa dolls and combines them through rules of assembly based on the collective drawing exercise, the exquisite corpse. Some of the dolls are handmade, others bootlegged. Knit or molded, carved or 3d printed, Fahrenholz takes these unique pieces and adds them to an assembly line of eccentric reproduction — undercutting Josh Silverman, the CEO of Etsy’s blithe assertion that “creativity can’t be automated.”

This method of reconstruction was first used by Fahrenholz in Mashes of the Afternoon (2018) which is composed of amateur remakes found on YouTube of Maya Deren and Alexander Hammid’s experimental film Meshes of the Afternoon. YouTube’s own algorithms can lead us from one #MeshesoftheAfternoon to another, shot in shit-hole suburban America by teens using the original film as an imitable score. But here Fahrenholz culls and combines the imitations to reproduce the canonical film shot-for-shot. Maya Deren as the main protagonist, hunted and dead by the end, has been replaced by a team of teens paying their respects through mimicry.

Fahrenholz’s handcrafted performance of algorithmic functioning has emboldened our protagonists — from one they are many. We now have an exquisite army of Elsas and a team of Mayas who through their formal cohesion and contradiction reveal the hand of the artist-as-algorithm running with agency and desire.