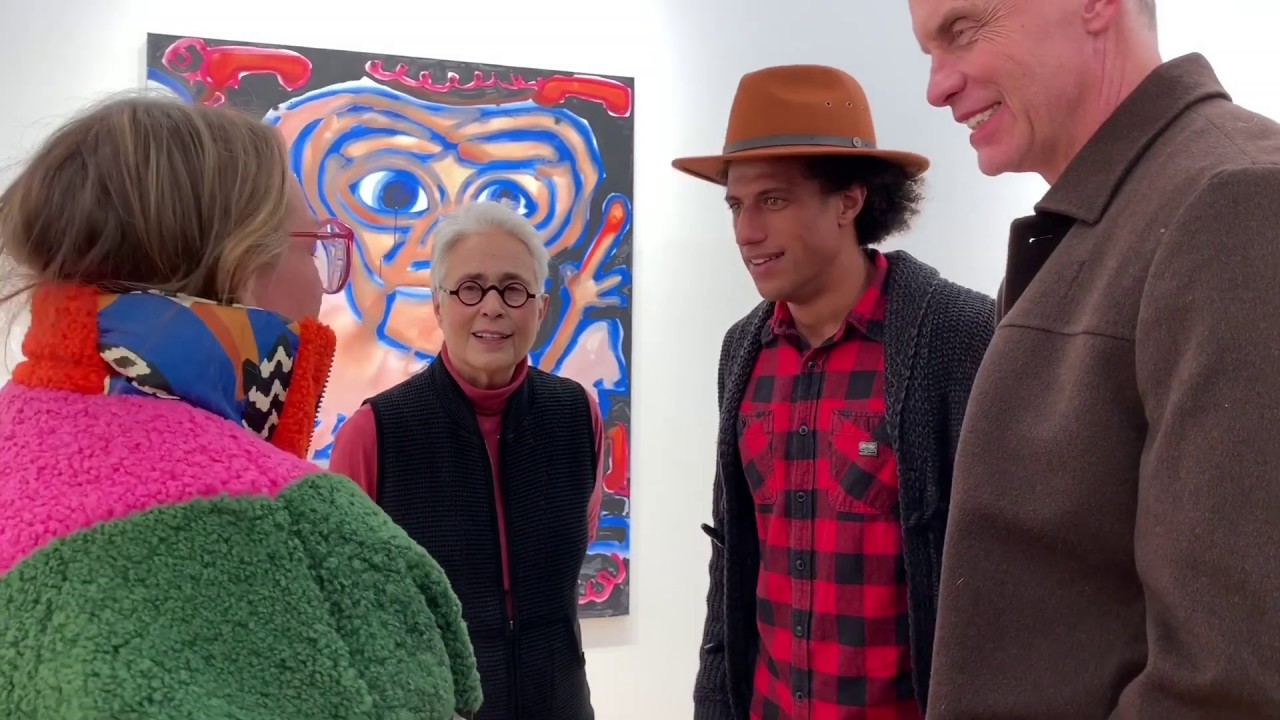 PR: Katherine Bernhardt debuted her “pattern paintings” at Canada in 2014, cementing her reputation as a painter full of liveliness, candor and formal inventiveness. The paintings in Done with Xanax are executed in the same free-flowing manner but with more intensely personal imagery. Much of the work in the show was made in Bernhardt’s childhood home in suburban St. Louis, and explores her grade school obsessions through the lens of a painter at the height of her powers. These works embody her passions and intellectual curiosity; they take on her personal history and pop-saturated upbringing in ways both unsettling and tender. Done with Xanax conveys seemingly dissonant thoughts simultaneously—defiance and care, anger and fondness— creating a landscape of honesty and self-acceptance.

E.T., the central character from Steven Spielberg’s 1982 blockbuster of the same name, is featured heavily in this group of paintings. The movie is a parable of home and an exploration of the secret relationship between the space alien, E.T., and his young human protector, Eliot. Elizabeth Bernhardt, Katherine’s sister, offers an insightful essay to accompany the show stating, “E.T. serves as a symbol of hope and empathy for Bernhardt who intensely relived his pathos eighteen times as a little girl at the local movie theater.” Bernhardt both identifies with and is protective towards the extra-terrestrial whose wrinkly visage peers out at us like a mute cipher. E.T., like all of her iconographies, was chosen because it reminds Bernhardt of a version of herself at a certain time or place.

Like a flume of 1980’s era detritus, Nike sneakers, Pac-Mans, Speak & Spell toys and cigarettes seem diverted from a sub-conscious river. The fickle materiality of spray paint and watery acrylic serves to create and obscure this imagery. For Bernhardt, repetition is a way of exploring her choices and sharpening her states of mind. It seems possible to understand her evocative title Done with Xanax to be a call for more feeling not less. By putting these painted things together without judgment, Bernhardt equalizes memory and sensation. To recall without priority or segregation is an act of personal redemption. And to paint without hierarchy or constraint is radical.

Katherine Bernhardt (b. 1975, St. Louis, MO) is based in Brooklyn and St. Louis. Bernhardt has exhibited extensively in New York and abroad at venues and institutions such as: the Modern Art Museum, Fort Worth, TX; the Contemporary Art Museum, St. Louis; Xavier Hufkens, Brussels; Shinji Nanzuka Gallery, Tokyo, Japan; Art OMI, Ghent, NY; Carl Freedman Gallery, London; the Lever House, NY; and Venus over Manhattan, NY. Her paintings are included in public collections such as: the Carnegie Museum of Art, Pittsburgh, PA; the High Museum, Atlanta, GA; the Hirshhorn Museum, Washington D.C; the Portland Museum of Art, Portland, ME; the San Antonio Museum of Art, TX; the Rubell Collection in Miami, among others.