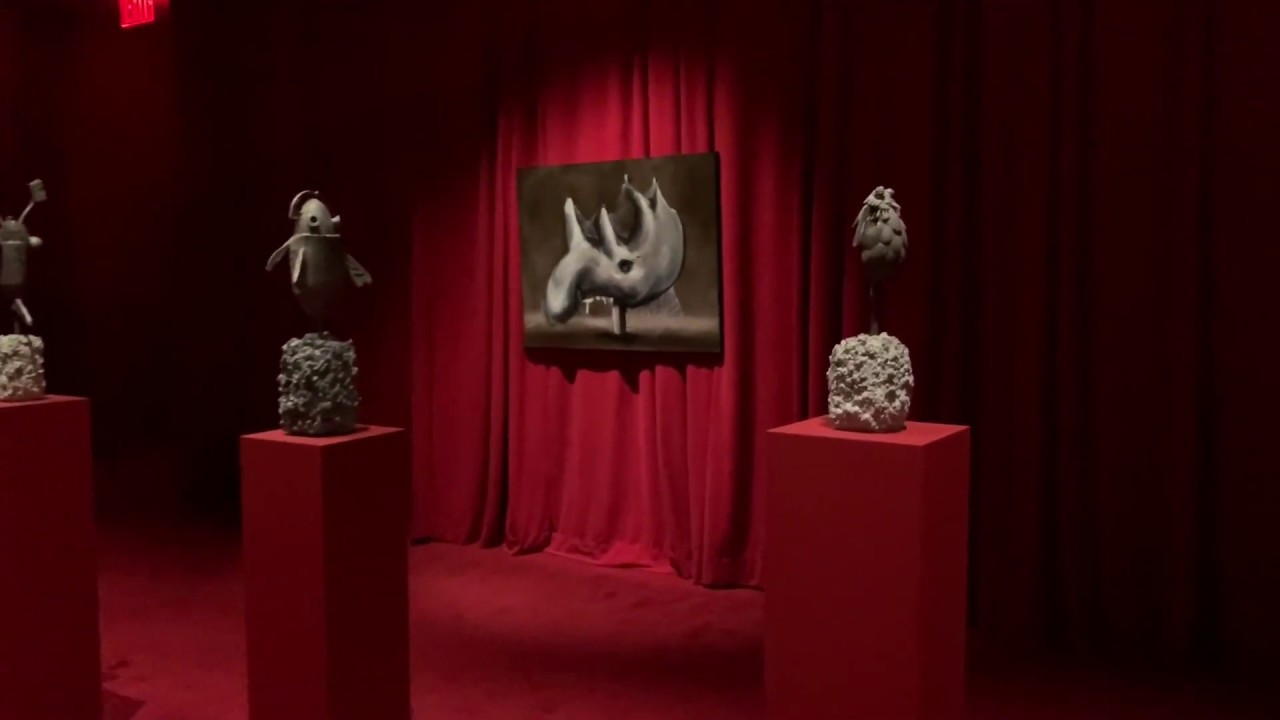 PR: Alexandre Singh’s first major exhibition at Metro Pictures features the New York premiere of his short film The Appointment (2019, 19 min). Singh transforms the gallery into an abandoned cinema from an imagined dystopic future. With trompe l’oeil wallpaper and flooring that is painstakingly hand-drawn, the exhibition includes sculpture and paintings that refer to the macabre vernacular of the film. The works further Singh’s ideas around narrative and storytelling, which he first began exploring in 2007 with his Faustian novella The Marque of the Third Stripe.

A darkly comic thriller, the film is a tale of doubling and mistaken identity that embraces the fantastical and supernatural qualities of Gothic literature, from E. T. A. Hoffmann to Roald Dahl. The protagonist is Henry Salt, an enfant terrible of letters who we meet as he wakes from a nightmare and discovers a confounding entry in his diary: “12 o’clock at the restaurant La Folie.” But who is Henry meeting? And why doesn’t he remember making this appointment? When no one appears at the scheduled time, Henry becomes obsessed with trying to uncover this person’s identity. Charging through a series of dreamlike encounters, he discovers that the truth is more disturbing than he could have imagined.

The five new bronze sculptures on view are cast from reworked film props Singh designed using found kitchen utensils. Like anthropological specimens from a post-apocalyptic world, these strange insect-like creatures sit frozen atop pedestals of detritus, piles of pasta, popcorn, and packing peanuts. Inspired by Japanese filmmaker Hayao Miyazaki’s characters, the black and white paintings in the exhibition are portraits of surrealist sculptures that seem to have come to life.

Screenings of The Appointment will begin on the hour, starting at 10am, and will run every 20 minutes. The film stars Samuel Crane and David Bamber and was produced by art historian Natalie Musteata in collaboration with EMU Films, London. An original score was written by the Dutch composer Gerry Arling. It is also on view through April 12, 2020, in Singh’s exhibition A Gothic Tale at the Legion of Honor, San Francisco.

Alexandre Singh would like to thank Tatiana Córdoba and Jo Jang. The exhibition is in memory of Anne-Marie Singh.

Born in 1980 in Bordeaux, France, Alexandre Singh works in a wide range of media, including installation, performance, literature, collage, and video. His theater play The Humans was developed by Witte de With Center for Contemporary Art, Rotterdam, and toured to the Brooklyn Academy of Music as part of Performa 13 (2013) and the Festival D’Avignon, France (2014). Singh’s work has been the subject of one-person presentations at White Columns, New York; Palais de Tokyo, Paris; and the Drawing Center, New York, as well as numerous group exhibitions throughout Europe, Asia, and North America, including the Lyon Biennial and Manifesta 8. His collaborations include Hello Meth Lab in the Sun at Ballroom, Marfa, Texas (with Jonah Freeman and Justin Lowe), and UNCLEHEAD (with Rita Sobral Campos) at the Museu da Eletricidade, Lisbon.