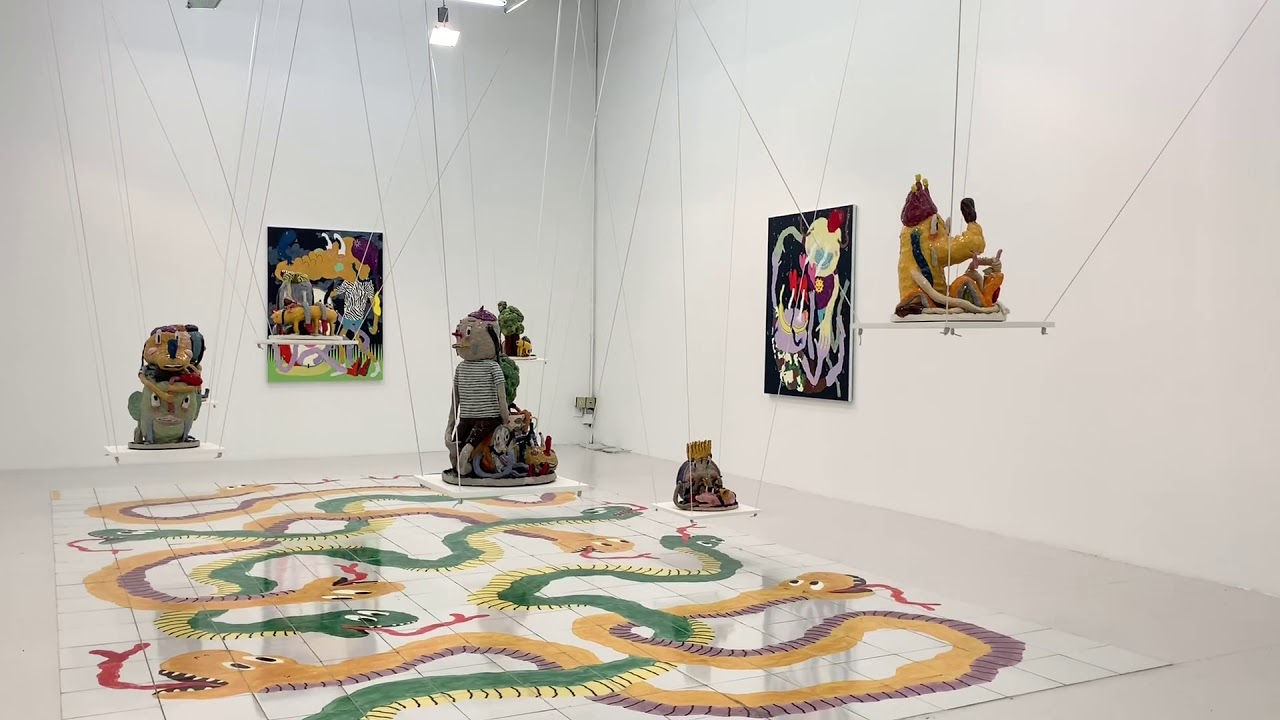 The Hole is proud to present the first solo show in New York by Swedish artist Joakim Ojanen, “Snake Pit”. In eight ceramic sculptures and five oil paintings, Ojanen shares his unique universe of duck-billed boys, silly hats, sweaty dogs, hairy legs, soccer balls, trees, clocks, clowns, and, of course, lots of snakes. Pushing his ceramic sculptures into larger and more complex dioramas, each artwork occupies a circular ground and is filled with action best viewed from all sides. A pizza crust topped with excitement! The oil paintings are looser than his previously fussy filigreeing, somehow even weirder and wilder than before.

Ojanen has been visiting New York from his base in Stockholm for the past month, spending all of February in the gallery’s basement studio cooking up clay in his new jumbo kiln. Braving winter temperatures in his windowless bunker to make his show on-site, over the past month, Ojanen has brought upstairs dynamic concoctions and magical beings; the excitement of turning earth into beautiful sculpture is part of the joy of ceramic, watching some mud take shape, become permanent, then be glazed in muted colors that cook up shiny and luminous. We hope some of the magic we have gotten to experience watching him work comes across in the exhibition he shares with you!

“Snake Pit” is his most ambitious installation yet, as he has executed a massive painted ceramic tile floor and suspended all his precious friends above it. With writhing snakes below, his eight creations sit on suspended pedestals precariously perched above the pit. More playful than terrifying, this game of “the floor is lava” is rather low stakes, as the floor is happy snakes a la Snakes and Ladders; only we, the gallery, are terrified that someone will bump the swing and smash one on the ground!

In terms of technique, Ojanen continues to explore what started as a self-taught exploration in clay and has become more sophisticated over the years. The texture has a handmade finger-hewn lumpiness; the heads are just about as big as you can make without advanced engineering; they are inventive but not improvisational, clearly a lot of time was spent on getting just the right expression and look in the eyes for each one. The detailing is fanciful: one figure’s blue-lipped grin looks like he was drinking raspberry Slurpees, and everyone has pronounced arm hair; little moments of inventiveness pop in from a dog’s tiny poo to a beer label or a Yayoi Kusama t-shirt.