Bursting with symphonic sunset shades, lush vegetation, and intriguing portraits that spark more questions than they answer, Iranian-born, Los Angeles-based painter Amir H. Fallah’s first solo presentation at Fairfax’s prestigious Shulamit Nazarian gets to the very heart of what it means to be an immigrant in America today.

Fallah’s work features a fascinating mix of eastern and western influences. His paintings are hybrids, much like the non-native women he depicts. Their faces and bodies are covered in hijabs emblazoned with Persian-inspired florals and geometric forms. However, these shrouds cover the entire face, just like the ones portrayed in Belgian surrealist painter René Magritte’s famed 1928 double portrait, “The Lovers.” We also see this amalgamation of influences in Fallah’s borrowing of Persian miniature and Pop Art style choices. The vividness of his colors, as well as the flatness of his picture planes, perfectly plays on this iconic post-war movement. To this day, Pop Art still represents all-things American with its simultaneous worship and questioning of celebrity culture and consumerism. To challenge our expectations about Middle Eastern women, Fallah’s subjects are depicted reading tabloid magazines while draped in decadent jewelry. Although Pop Art first became popular over fifty years ago, it represents modernity and progression in this particular context.

With Fallah’s Iranian heritage, we also see him delving into his ancestral past with his exploration of Persian miniature painting in this collection. Heavily influenced by Chinese art, Persian miniatures first rose to prominence during the 13th century. With their ornate margin decorations and bold hues, these societal depictions acted and looked very similar to western illuminated manuscripts. From the 16th through the 18th century, Persian miniature painting flourished under the Safavid Empire as it was a very progressive, multi-cultural Islamic society that promoted literature, art, science, and math. We can see this influence clearly in Fallah’s choice to include a scientific beaker next to one of his lounging subjects. Also, the artist’s flat compositions and abundant depictions of nature and geometric forms all echo back to Persian miniature painting.

Across all of the paintings in this series, Fallah includes floral borders breaking up the picture planes. They are all unique. We can see the Star of David in “A Path Set in Stone” and rib vaults common in the cathedral ceilings of the Middle Ages in “Young Pioneers.” Also, many of the canvases are shaped ones often found in western Medieval portraiture, especially Catholicism.

These delineations pointing to different religions and cultures help us to recognize the need the for tolerance and coexistence as well as challenge notions surrounding geopolitical borders. Flora, fauna, and family photos also frame the paintings, while his subjects themselves all feature saturated, unnatural yellow and orange skin tones that blend in with the sunsets behind them. These characters are purposefully ambiguous to reflect the way people project their own ideas onto immigrants.

In this series, the viewer sees Fallah coming to terms with his identity as an Iranian immigrant in this age of fear and paranoia surrounding people of different backgrounds. This rising tide of nationalism in the West makes this exhibition feel exceptionally timely and relevant. Living and working in the incredibly diverse city of Los Angeles, the artist creates work that helps immigrants feel more at home in their new surroundings by declaring that no one should have to give up their cultural heritage to feel as though they truly belong.

Amir H. Fallah: A Stranger in Your Home 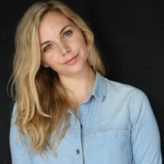 Emily Nimptsch is a freelance arts and culture writer living in Los Angeles. She has written for Flaunt, ArtSlant, Artillery, and Time Out Los Angeles.