Milan-based artist Mattia Barbieri makes his solo debut at Pablo’s Birthday Gallery with the exhibition titled Due – The Full Frontal. On view throughout the gallery’s ground floor are Barbieri’s recent oil paintings, which look at traditions of art history through a contemporary lens. While relatively small in size, these works are loaded with layers upon layers of visual information. The aftermath is a picture so dense with reference that it cannot hold onto a single idea or message for very long. By presenting elements and symbols that are disconnected and compete with each other, the artist offers insight on human experience in a digital world where fragmented and ever-changing computer screens are forming our perceptions of reality and each other.

More directly than any other painting in the exhibition, Paesaggio con ermes e argo pays homage to classical painting’s hierarchy of genres. Here, Barbieiri references the genre of landscape with an exquisite pastoral scene of a green field that culminates in a single tree off in the distance with an atmospheric sky overhead. Look closer and you realize that the painting could be turned 90 degrees counter clockwise to show a similar bucolic scene. The artist distanced the work even further from his old master processors by exploiting the 2-dimensional format. Rendered in pastel blue and pink, two streaks cover the surface, reminding of marks made using a design program such as Photoshop. In the lower right-hand corner, the time has been painted like numbers on a digital clock.

The series naïve melody consists of four paintings depicting sailing ships at sea that bring to mind the celebrated work of Winslow Homer. These images are layered to various degrees and have a meta-quality about them. Barbieri has portrayed ships as the painting’s subject in the background. While in the foreground, he has painted a Polaroid photo of the large sea vessel. Any sense of narrative, compositional balance, and pictorial depth is obliterated by curving and linear streaks of paint, digitally derived numbers and letters, and swatches of tape that cover the surface.

Uomo con violino presents a dizzying mix of classicism and pop culture. The title translates to man with violin, a subject previously captured by Picasso during his Cubist period. Like Picasso, Barbieri skews reality by breaking up the picture plane and including incongruous elements such as the Ghostbusters logo, a burning cigarette, a figure with a deformed hand, and the time in digital numbers. Graffiti-like gestures strewn the surface making a very loose suggestion of a man’s face.

Ercole al bivio shows an abstract bust of a man articulated by layers of flat lines and shapes. The bust sits on a realistically rendered platform and even casts a shadow suggesting its physical existence. The work’s title translates to Hercules at the crossroads, or Hercules’ choice, a favorite mythological subject of art history that tells the story when the Greek God is faced with the choice between Vice and Virtue. Barbieri has created a contemporary Hercules whose mind is fragmented and riddled with so much information derived from Google search that decision-making becomes nearly impossible.

DUE – The Full Frontal was on view at Pablo’s Birthday Gallery until March 5, 2017. 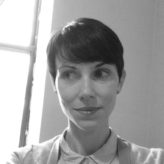 Kate Murphy is a native of Pennsylvania. After receiving a degree in art history, she moved to New York City to test the waters. She enjoys writing about art, culture, fashion, design, and travel. In addition to writing, Kate works with artists, leads street art tours, and moonlights as an illustrator.