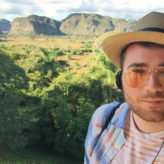 Stephen Barry is a writer and graduate student of global affairs living in Brooklyn. His interests are travel, art, and literature. While open to all forms of artistic expression, he favors the styles of artists such as: Edward Hopper, Giorgio de Chirico, and Marcelo Pogolotti. Stephen is involved in the Brooklyn Street Art scene, and believes city walls should be painted. He also publishes under his nom de plume, T.K. Mills.

On a fine Friday evening, the sky still bright with the nascent long sun of summer, we embarked on our gallery tour. An …