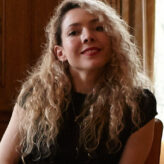 Emireth Herrera Valdés (b. Saltillo, Mexico) is an independent curator and writer based in New York City. Herrera has curated exhibitions such as S.T.E.P. at Queens Museum, Tongue Tide, 3459’ at Flux Factory in NYC, and Todos Bien at the Sinaloa Museum of Art in Mexico. She co-curated the exhibition Grilo/Fernández-Muro at the Institute of Fine Arts, NYU funded by the Institute for Studies on Latin American Art. Merging her curatorial practice with education she has organized numerous public programs between the MARCO Museum in Monterrey, Mexico, the Autonomous University of Coahuila and the TATE Modern Gallery. Her project From the Vulnerable Territory to the Utopia was presented at the AROS Museum in Aarhus, Denmark. Her articles have been published by VISTAS by ISLAA, LAR-magazine in Latin America, Seoul Art Space Geumcheon, and the Autonomous University of Nuevo Leon.

The positive concept of liberty is “to choose to live as they desire.” -Isahia Berlin, 1969. A deeper glance into the sc…