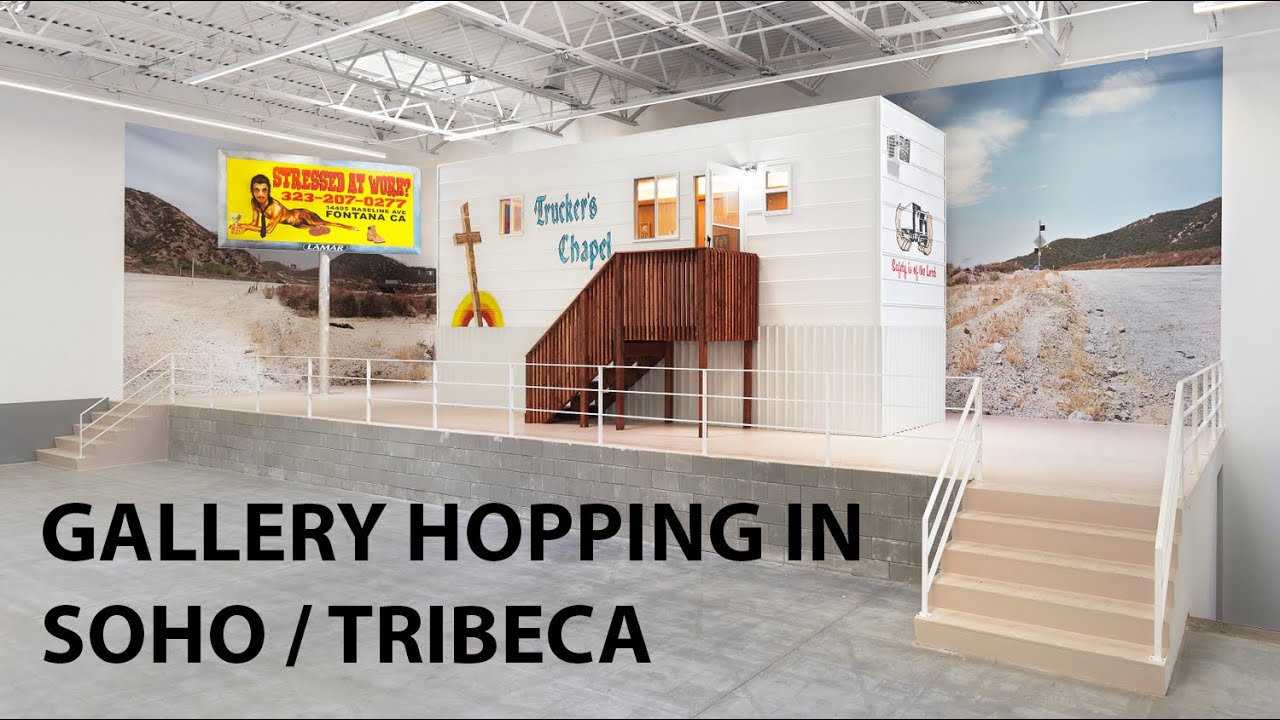 Mario Ayala brings Southern California’s Inland Empire to New York for his September-October exhibition at Jeffrey Deitch. The truck stop chapel, tire shop and roadside billboard that he has installed in the gallery create the context for his new work. Ayala’s meticulously crafted paintings extend the American Pop tradition into the present, drawing on a unique combination of art historical and vernacular influences shaped through his own life experience.

Ayala aspires to make “working class paintings.” He wants the truck drivers and automobile mechanics with whom he grew up, as well as art connoisseurs, to appreciate his work. The paintings are easily accessible on one level, but are also highly sophisticated and art historically informed, building on artistic innovations of American modernists like Charles Demuth and Stuart Davis and on the conceptual approach to painting of Jasper Johns and Ed Ruscha. Ayala describes his work as fusing Cool School and Mission School. His artistic vision draws on both the 1960s generation of Los Angeles artists influenced by billboards, hot rod culture, and industrial materials, and the hand painted signs and graffiti that influenced the San Francisco artists he encountered while a student at the San Francisco Art Institute. One of his SFAI professors, Carlos Villa, remains a foundational influence. The Luggage Store, co-directed by Darryl Smith and Laurie Lazer, and Andrew McClintock’s Ever Gold [Projects] became an essential part of his San Francisco experience.

The artistic fusion that Ayala has developed goes well beyond the Cool School and the Mission School. Especially significant is Ayala’s extension of the Pop Art tradition into the vernacular imagery of the Mexican American and other Latin communities of Los Angeles, the Inland Empire, and the Bay Area. While living in San Francisco, he was especially inspired by the open artistic platform of the zines published by Audrey Revel, owner of the Doré photo studio in the Mission District. These zines gave voice to incarcerated artists and to young people of color and gave him hope and direction as an aspiring artist. The now legendary Teen Angels and Corazon magazines which celebrated the visual culture of his community from the 1980s to the mid 2000s, continue to influence his work. He keeps a prized collection of vintage issues in his studio.

Ayala’s paintings are created through a fascinating fusion of old master, digital, and industrial techniques. After art school, Ayala studied automobile painting at LA Trade Tech and continues to study industrial painting processes. His combination of industrial applications with a practiced artist’s hand gives his work a unique sensibility. He compares the layering of glazes in old master and automobile painting, explaining how both use this technique to achieve realistic effects and an illusion of wetness.

Ayala sees a parallel in the East Los Angeles subculture of lowriders and the hot rod culture that inspired the Cool School artists. He draws on both to create his distinctive combination of fine art and popular art imagery. Many of the paintings feature words, adding his contribution to the history of Los Angeles artists incorporating text into their paintings. The structure of the paintings also builds on Minimalism. He channels Donald Judd in his stack of precisely painted stereo consoles from automobile dashboards, which also reference Ashley Bickerton’s incorporation of commercial logos.

The paintings appear to portray the backs of actual trucks, buses, an ambulance, oil cans and billboards, but upon deeper examination, one begins to realize that the images are shaped by the artist’s imagination. He delights in the combination of illusion, invention, and reality. He expands the terrain of Pop Art into a discourse with the subcultures that generate mainstream American culture. The work is exuberant, but there is also an undercurrent of darkness. The work captures the strange, surreal quality of much of the contemporary American experience.

Mario Ayala is the son of a Mexican American mother and a Cuban immigrant father. He grew up in Inglewood in Los Angeles County, and later moved to the trucking hub of Fontana in the Inland Empire. He often accompanied his father on his long haul trucking route. His work includes many references to buildings and signage in Fontana and neighboring towns. Ayala now works in Los Angeles in a studio building surrounded by a community of artist friends. His studio practice involves many hours of solitary work but his engagement with this supportive community is an essential part of his approach to making art.

With its fusion of fine art and industrial techniques, its mix of art historical and pop culture imagery, and its incorporation of his Southern California cultural heritage, Ayala’s work opens a totally contemporary artistic direction. He is creating the new American painting.