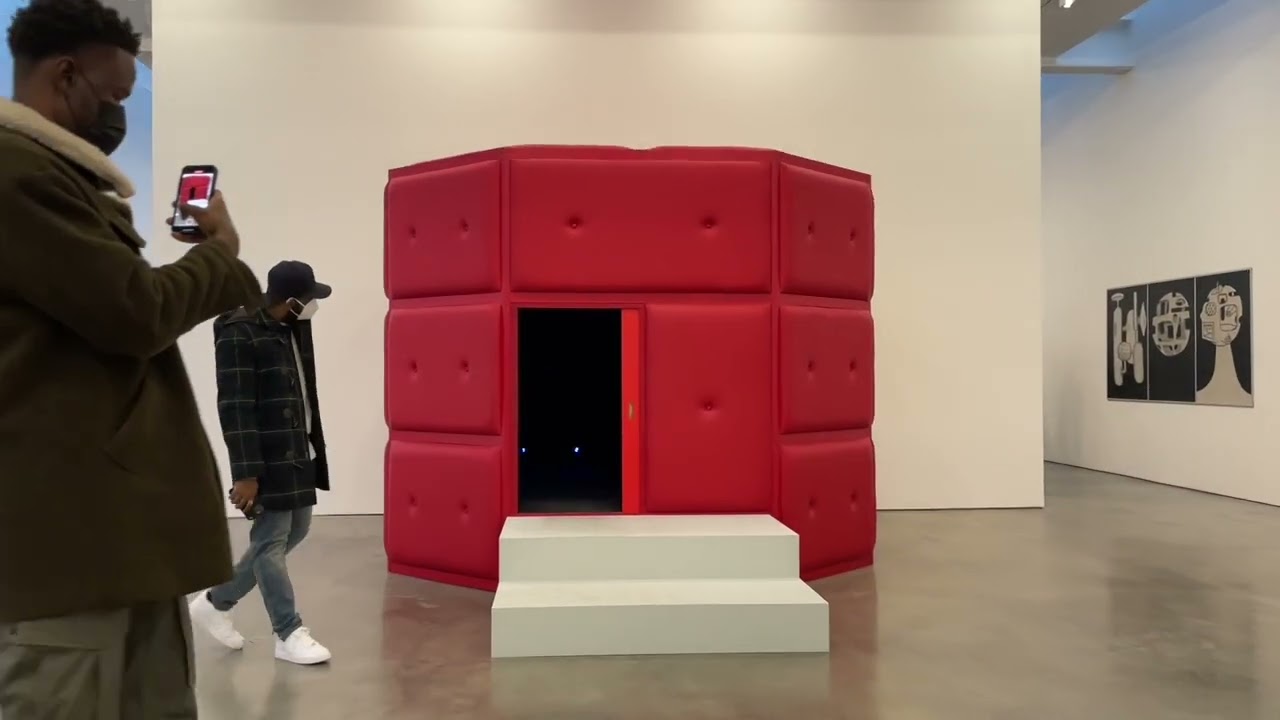 Lisson Gallery is pleased to present a group exhibition featuring artists who engage with various forms and concepts surrounding the use of pavilions. Pavilions illustrates the disparate artistic approaches to this subject matter, ranging from physically-realized structures to designs conceived as ideas or sketches. Though the works in the exhibition vary in medium and scale, all are centered around the interaction with the viewer, together creating an environment that explores individual memory, identity and experience.

Adjacent to the brick installation sits Tony Oursler’s Psychomimetiscape (1987-1988). The model for an imagined setting features a medieval turret stationed next to a nuclear power plant. The work relates to the industrial military entertainment complex. Informed by cold war paranoia the work conflates early video game technology and the stylized spectacle of the war memorials and firework displays. Early computer animation in two-channel videos is used to trace the history of weapon production to meteorites and explore radioactive sabotage in the workplace, and the tabletop landscape plays with the forms of traditional architectural models.

Dan Graham’s Triangular solid with circular cut-outs – variation S (2017) uses the familiar reflective glass of the skyscraper for an intimate, gazebo-like construction. “My pavilions are always a kind of two-way mirror,” explains Graham, “which is both transparent and reflective simultaneously, and it changes as the sunlight changes. This relates to the changing landscape, but it also means that people on the inside and on the outside have views of each other superimposed, as each gaze at the other and at the material. It is intersubjective.” Reality shifts in Dan Graham’s passageway: outside and inside, focus and dissolution, the virtual and the real coalesce in the reflection. The architecture references Chinese garden moon gates and the artist’s conceptual entranceway offers the viewer a sense of self in space while also removing all corporal bonds, as physical reality and reflection become indistinct.

Throughout the exhibition the sense of self remains paramount. Multiple sculptures and pastel drawings by Beverly Buchanan (1940–2015) explore the relationship between memory – personal, historical, and geographical – and place. Focusing on Southern vernacular architecture, Buchanan’s structures delineate an emotional grounding, embodying the spirit of those who lived in these “shacks”, as she defined them, and honoring the history of Black ingenuity and resilience. In a previous interview Buchannan adds, “I’m interested in their shapes, how they’re made and how they reflect the people who built them. I consider my shacks portraits. It’s the spirit that comes through the forms.” Pedro Reyes’ works on paper similarly addresses social history and ancestry. Inca (2017) and Study for a Troglodyte Dwelling (2017) engage with Mayan, Olmec, Toltec and Mexican heritage, drawing on the notion of home in Pre-Columbian civilizations.

Onward through the gallery stands Tatsuo Miyajima’s Life Palace (tea room) (2013). Presented in a room by itself, this creates a meditative chamber where visitors can bathe in the blue glow of the LED counters. These ‘gadgets’ count down from 9 to 1, representing the human life cycle, as illustrated in Buddhist teaching. In this tea room ‘pavilion’, the artist invites visitors to ‘drink time’.

Works by Agnes Denes, Alice Aycock and Anish Kapoor depict future and proposed architectures. Kapoor’s architectural models offer a preview of some of the artist’s most ambitious forthcoming and unrealised projects. With human figurines demonstrating scale, these models highlight Kapoor’s marriage of sculpture and construction design, while exploring themes pertinent to his career. Alongside these, four Agnes Denes drawings from the Pyramid series illustrate potential ways of living in the future, when the means by which we currently live on this planet will no longer be feasible. “Pyramids weave in and out of my work from the very beginning in diverse forms dealing with a great variety of issues important to humanity,” Denes stated on the occasion of her retrospective at The Shed, New York. “Each form and concept represents an enigma, something to which we must respond. These forms are a ‘visual philosophy’ that conveys ecological, social and cultural issues in a multitude of shapes. Every pyramid and every form presents a purpose, poses a question and seeks an answer for humanity.”

Alice Aycock’s Untitled (One Hundred) (1984) continues the inquiry into future living, drawing on real and imagined architectural projects that touch on the relationships between fantasy and science, imagination and experience. In this blurring of real and fictional, she encourages audiences to transgress predetermined conceptions and to venture, as she puts it, “farther into another place.”