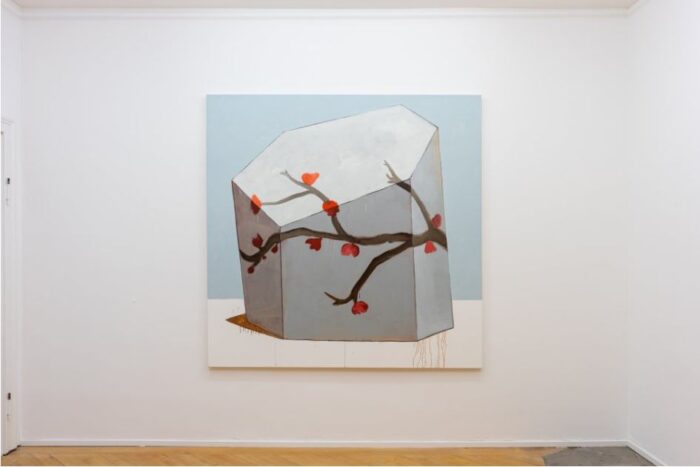 PR: The exhibition at Mai 36 Galerie presents the new series PERFUME, in which Michel Pérez Pollo explores the formal and conceptual characteristics of the perfume bottle cap as a medium of pleasure and beauty and, in doing so, combines the physical object with its specific and expressionistic style. The resulting figurative situations and the objects portrayed within the image space take on a surreal and at the same time poetic effect.

Perfume, defined as an alcohol-based liquid containing fragrant essential oils and aroma compounds, implies a permeative and long-lasting scent that can conjure intense and unforgettable memories in the human mind. On this basis, Pérez Pollo’s new series forges a connection between the aspects of beauty, scent and inherent recall, and makes a serially produced object – the decorative cap of a perfume bottle – the focal point. It is a kitsch object. The artist calls this into question by putting it through the artistic process of sketching and modelling until eventually a sculpture is created that defines the object somewhere between the exaggerated and the monumental.

On viewing the scale of the work, the relationship between the motivic and the organic reveals itself through the exploration of both the olfactory and the visual, whereby the inherently subtle connection between nature and perfume becomes visible. Pollo’s painting thus represents reflection on a level that goes beyond the formal characteristics of the perfume bottle.

Michel Pérez Pollo (born 1981 in Manzanillo/Cuba, currently living and working in Madrid) studied at the Escuela Profesional De Artes Plásticas in Holguín and at the Instituto Superior de Arte in Havana. His works are exhibited internationally and were recently presented in the 2019 solo exhibition MARMOR at the National Museum of Fine Arts in Havana.