Michael “Mike” Kelley often took on an anthropological view of American pop culture throughout his artistic career. Never did he glorify it in his many works but, instead, gutted it deconstructively then pieced it back together in appalling ways. These amalgamations were often telling about culture, revealing something not before conceived. In this body of work specifically, Kandors, Kelley took an interest in popular culture and those things that resonated with a societal audience. He sought to explore the multi-faceted nature of loss, power, and memory as it exists in conjunction with the human condition.

Since the close of the Great Depression and the rise of Second World War, Superman was the first costumed character with superhuman abilities to appear in comic books. Superman’s legacy is that of an alien baby sent to earth to escape the annihilation of his home planet, Krypton.

According to the comics, Kandor is the city in which superman was born; a place once thought to have been destroyed but was alternatively shrunken by the hero’s primary antagonist, Braniac. Superman later rescued the city by bottling it beneath a bell jar in his home.

Kelley was something of a Dada artist, a movement during the early twentieth century in which social and artistic conventions were mocked and the absurd was emphasized largely in reaction to the first World War. However, his interest in the superman lore did not seek to employ the subject matter as a catalyst for a political agenda, but rather, the work was driven by connection (to the audience). Kelley wrote in reference to Kandor, “I was not personally interested in the Superman mythos, but I felt the popularity of the narrative would lead me to a large number of people who have a common interest.”

One of the pieces featured in the body of work, Superman Recites Selections from ‘The Bell Jar’ and Other Works by Sylvia Plath, is a video installation wherein an actor depicting Superman quotes lines from Plath’s book The Bell Jar; a novel in which the protagonist descends into mental illness. The specific portions quoted use imagery to depict a bell jar and, arguably, Superman’s own struggle with identity. Kelley wrote in reference to the piece, “Superman directs these lines to Kandor, the bell jar city that represents his own traumatic past, for he is the only surviving member of a planet that has been destroyed. Kandor now sits, frozen in time, a perpetual reminder of his inability to escape that past, and his alienated relationship to his present world.”

A facet of interest to Kelley about Kandor was that the depiction of the city was constantly changing. This lack of continuity in architectural design throughout the Superman franchise is chock-full of the ambiguous nature of memory. It has been theorized that the act of remembering is similar to the telephone game, in which the human brain remembers the last time it conjured a memory and not the actual event itself, leaving room for arbitrariness and intangibility.

For Kelley, the work seeks to explore the nature of memory that remains elusive and apply it to what he termed as, “a culturally shared fantasy space.” Kelley posited that, because of the arbitrariness of memory, history (specifically art history) was not above those fantasies, fetishes, and distortions that the authors of said history were subject to in their everyday life. This stance and Kelley’s post-minimalistic influence are made evidential in his video installation, Extracurricular Activity Projective Reconstruction #36 (Vice Anglais), that is projected onto the wall of “the Cave.”

Post-minimalism rejected the industrial materials and authoritarian tone of minimalism and instead embraced self-expression, which often manifested in exploring elements of sexuality. This influence is most pronounced in the aforementioned piece as Rosetti and his gang of perverts emulate the elusiveness of fantasy through the employment of sadomasochism; there is no objectively true or authentic Rosetti that can be purified from perversion as there is also no (art) historian who can be separated from the pervasiveness of fantasy and dissonance.

The thematic exemplification of loss, power, and memory throughout the show could be conjectured to point a finger back at the audience, in a sort of Vito Acconci in Centers type of way. A thing that forces the viewer to consider their relationship to the piece, and not simply gaze in awe of it. It is gestural, fantastical, and uncomfortable but in the great by and by it exists as that nostalgia for what cannot be and cannot be known. It is that reticent nature of memory that fuels loss for something unachievable. Kelley wrote that, “For us, Kandor is an image of a time that never was — the utopian city of the future that never came to be.”

With that nostalgia, loss, trauma, and memory the powerful opulence of Kelley’s resin sculptures and sparkling miasmas within the bell jar projection pieces gives the viewer a sense of wonder. As the cosmos have enchanted man since before time, there is something hopeful that lay within the warm glow of the unknown. There is something to be said for the fear of uncertainty within the unknown, to be sure, but just as much if not infinitely more can be said about the beauty of unknowingness that leaves the viewer copious space for hope in what can be and what will be.

The Mike Kelley Foundation for the Arts presents this work by the late Mike Kelley at Hauser & Wirth in the arts district of Los Angeles. The foundation, spearheaded by Kelley himself in 2007, seeks to preserve his legacy and provide grants for projects that aim to be as innovative and influential as Mike Kelley. Hauser & Wirth, being an establishment dedicated to influential work of art and transforming communities, seemed to be a natural corroboration with the foundation to achieve similar goals of varying degrees in pursuit of art that embodies Arthur Danto’s ideology of force. 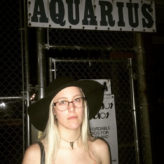 Angela Groom is a journalist and artist. She has works for a number of publications ranging news, fashion, health and wellness, and art. She works primarily with paint creating either surreal landscapes, nudes, or abstract figures.