As part of the same Californian artistic milieu as Allen Ruppersberg, Guy de Cointet, and Bas Jan Ader—with whom he in particular edited the magazine Landslide, presented on the third floor of the museum (in the “office” part of the Apartment)—, Leavitt has developed a singular body of work, on the one hand, participating in Conceptual art (whose some important representatives, such as Douglas Huebler, are based in Los Angeles), and the “Narrative art” movement that emerged in the early 1970s.

The exhibition brings together historic works, installations or photo-compositions, many of which have never been shown in Europe before, paintings, and drawings from the 1980s-1990s, as well as major recent installations. The project has been organized in such a way as to respect the chronological development of the work, while highlighting its thematic resonances, ranging from science-fiction to the notion of decor. It provides the possibility to take in the extent of William Leavitt’s project, to reposition his contribution in the decades he has lived through, and to evaluate the echoes it continues to have with many artists of new generations.

Through his installations, drawings and paintings, play and sound performances, Leavitt thus re-examines the production of the Western imaginary, as imposed, since the end of WWII, by the “Hollywood factory.” Through a selection of parts of stage sets, the isolation and recombination of fragments coming from everyday culture, which often conceals a conservative social order and politics, the artist turns these representations inside out: he makes us see them as so many conceptual frameworks in which stories (fictional ones or from our own lives) can be set.

This exhibition benefits from the support of the Fondation du Jubilé de la Mobilière Suisse Société Coopérative and of the Greene Naftali Gallery, New York. 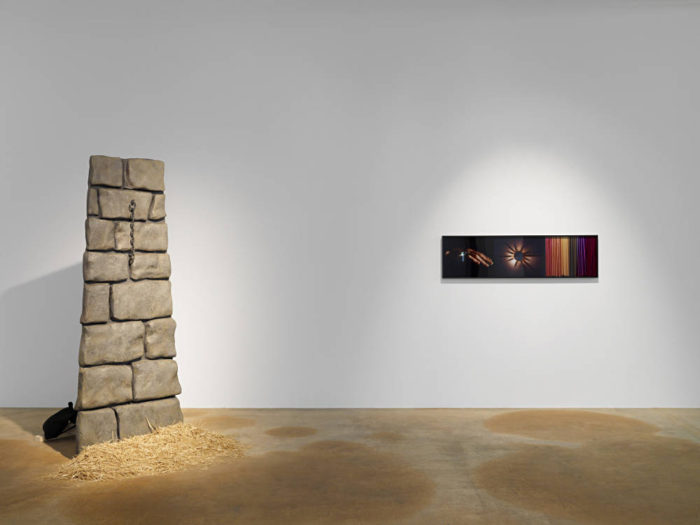