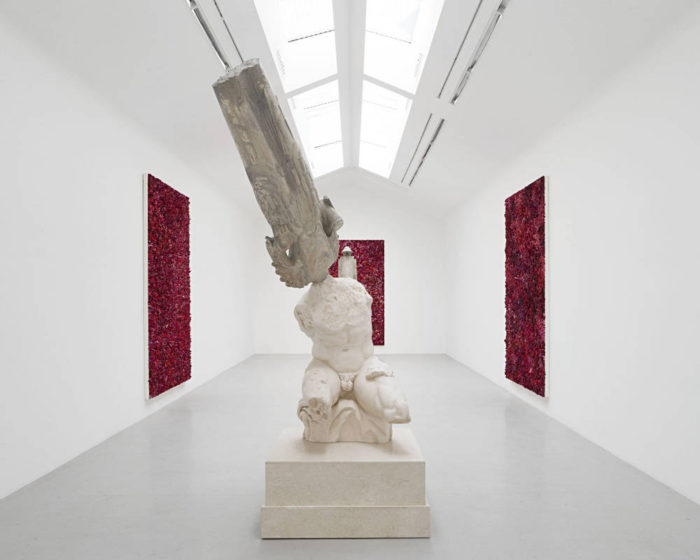 Iteration refers to the way of achieving a desired result through repeated feedback. The exhibited series shows how an artist, amidst increasing globalization and networking of art, can approach the future of art with his own formula.

As early as 2001, Xu participated in the 49th Venice Biennale, then the youngest Chinese artist to exhibit works at this international art event. Having made a name at 20 as an artist, he has since created a large number of works based on his own consciousness. The passage from one century to the next brought with it not only socio-economic but also cultural changes, the latter deeply influencing Xu as an artist. The great divide of his career came in 2009 when he established the art creation enterprise MadeIn Company in Shanghai. Since then his works have been produced in a corporate fashion and his “artist” identity has been plunged into the center of controversy. Meanwhile, Xu’s creative focus has begun to shift to the relationship between art and business. 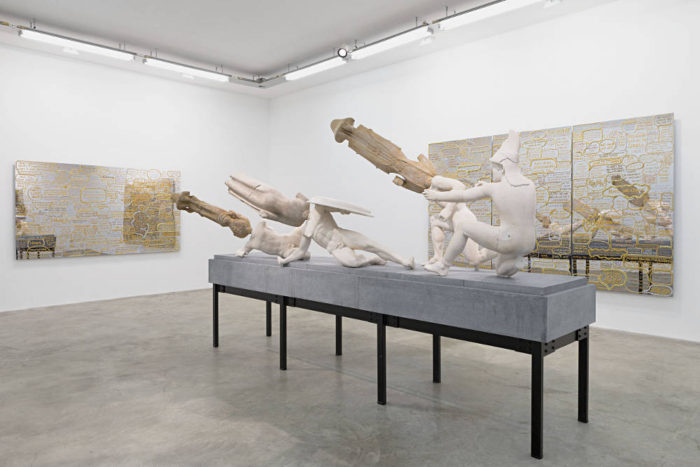 Monika Szewczyk, a curator of this year’s Kassel Documenta, once said, “To be sure, Xu Zhen is not the first artist to transform himself into a company, and countless others incorporate more quietly to maximize their income and maneuverability. But MadeIn may be special in at least one respect: The company’s production could be understood increasingly to contemplate the notion of heaven –not offering up a clear picture the way religious authorities might, yet keeping this abstraction in focus as a question.”1
The title of the Under Heaven series echoes heaven as a metaphor. The paintings appeared in the 2014 Armory Show in New York to serve the commercial campaign for the fair itself. Layers and layers of oil paint form an ornate “landscape”, and with the skillful depiction and figuration of a cream piping bag (not a paint brush!), they make up an enticing visual banquet.

The series manages to transcend the opposition between art and business, which exemplifies Xu’s creative strategy: rather than addressing the big spectacle issue head on, one might as well turn it into a positive account by creating a new approach of one’s own. This way of thinking explains why Xu is so fluent in using visual symbols from popular culture. In the Metal Language series, phrases from political cartoons are presented in an intensive manner on a mirror- finished metal surface. The graffiti-like composition seemingly agrees with the radical stance of the political language but is in fact betrayed by the extravagance of the metallic gloss. This inner contradiction throws the works (and even their producer) into a suspended state of meaningfulness. 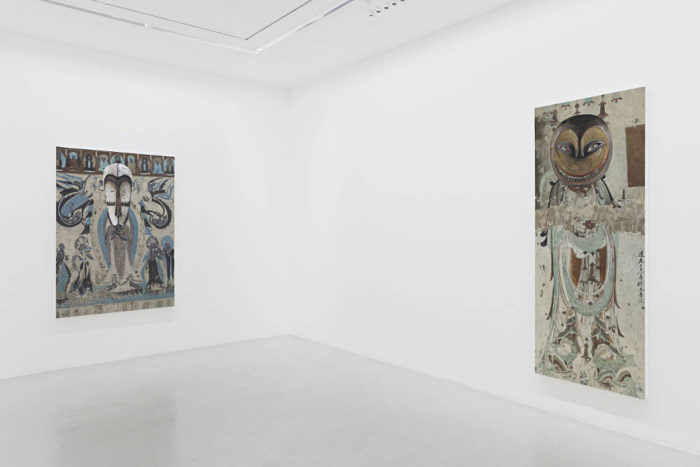 Because of their metallic and creamy landscapes, Xu’s works have been classified as pop art, even though the label apparently can apply only to some of his works. In terms of creative logic and cultural appropriation, Xu has no doubt gone beyond pop art. For instance, his series Eternity and Evolution all reference a far more expansive, long- lasting civilized world than the consumer society. Ancient art pieces, Dunhuang frescoes from the Silk Road’s heyday, representative modernist sculptures of the West…when we see these cultural symbols repeatedly change shape or re-combined in new ways, we cannot help but feel an implosion of meaning set off by the accumulated spiritual force of culture.

This force comes not only from the cultural symbols being used; it is in a way more the cultural changes induced by the globalizing Internet. In a modern context, we tend to identify Greek sculptures solely by their greyish white plaster, forgetting that they were originally divine statues with colors. The truth behind cultural relics is ever elusive to the museum visitor. People even turn to the Net, using search engines to make up their own pictures of the origins of civilization. Between the colorful Greek statues and the modern white plaster versions, and the Acropolis in Athens and sculpture photos on electronic screens, is the loss of a common context.
And it is because we are so accustomed to this cultural reality that the two contrasting series Eternity and Evolution appear all the more harmonious and splendid to us.

From the “individual artist period” when he concerned himself with the consciousness of identity, to “Xu Zhen brand”, Xu has moved on to repeatedly examine the current culture. The transition is nothing less than a reflection of the tremendous changes in human history over the past decades. Admittedly, the extension of consciousness unleashed by the Internet has eliminated temporal and spatial disparity. Yet, in the process, cultural learning in the traditional sense has been destroyed by information overload, giving way to recurrent cultural stagnation and dysfunctional standards. The information highway makes one feel unreal, so much so that the boundaries between meaning, values and reality gradually blur. Living in this “post-truth” age, one begins to see why Xu should uphold “iteration” as an effective way of responding to a postmodern society.
For in the course of time, after endless destruction and reconstruction, the boundless reformulations are sure to open up a new paradigm for civilization in the present.