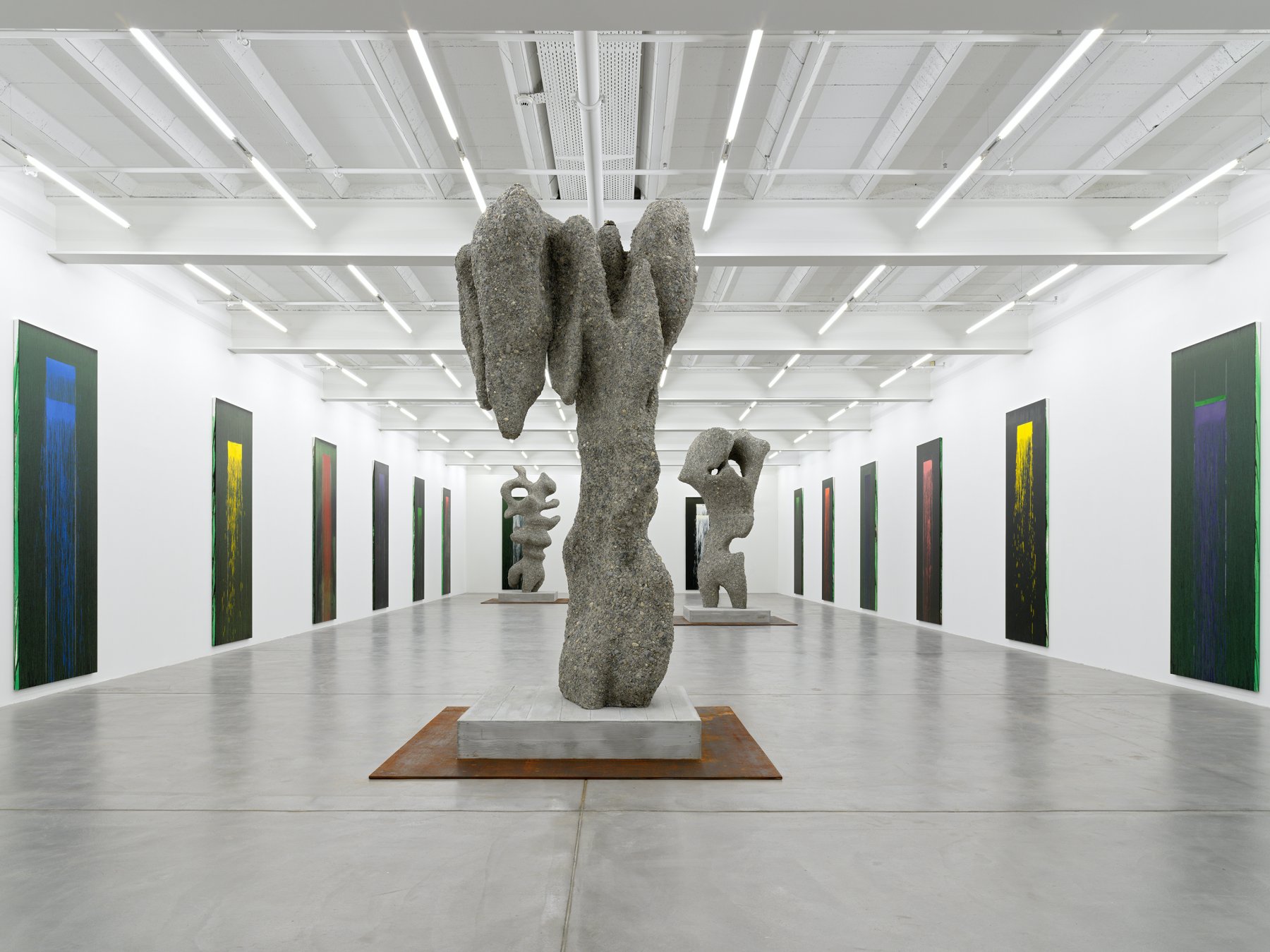 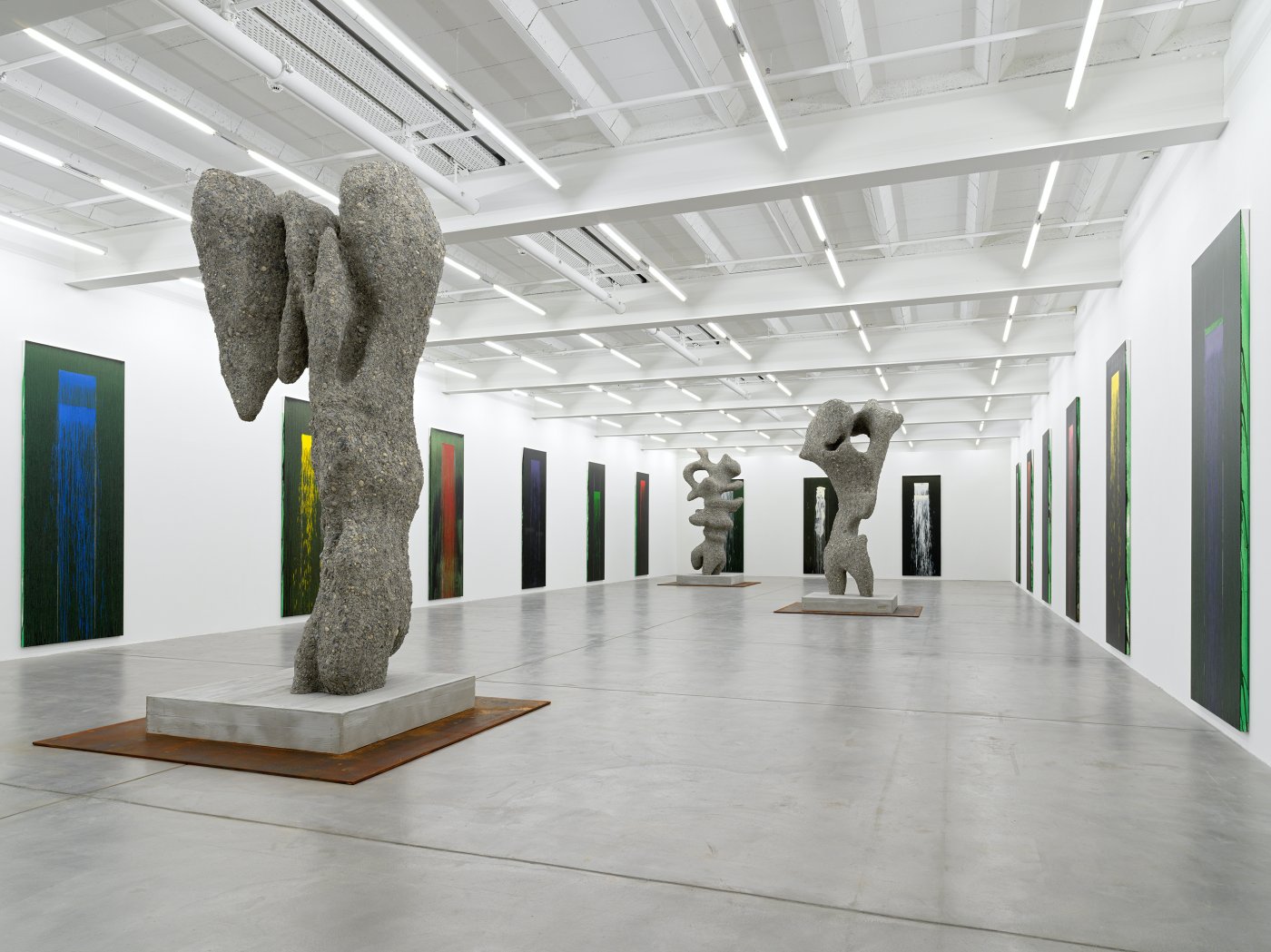 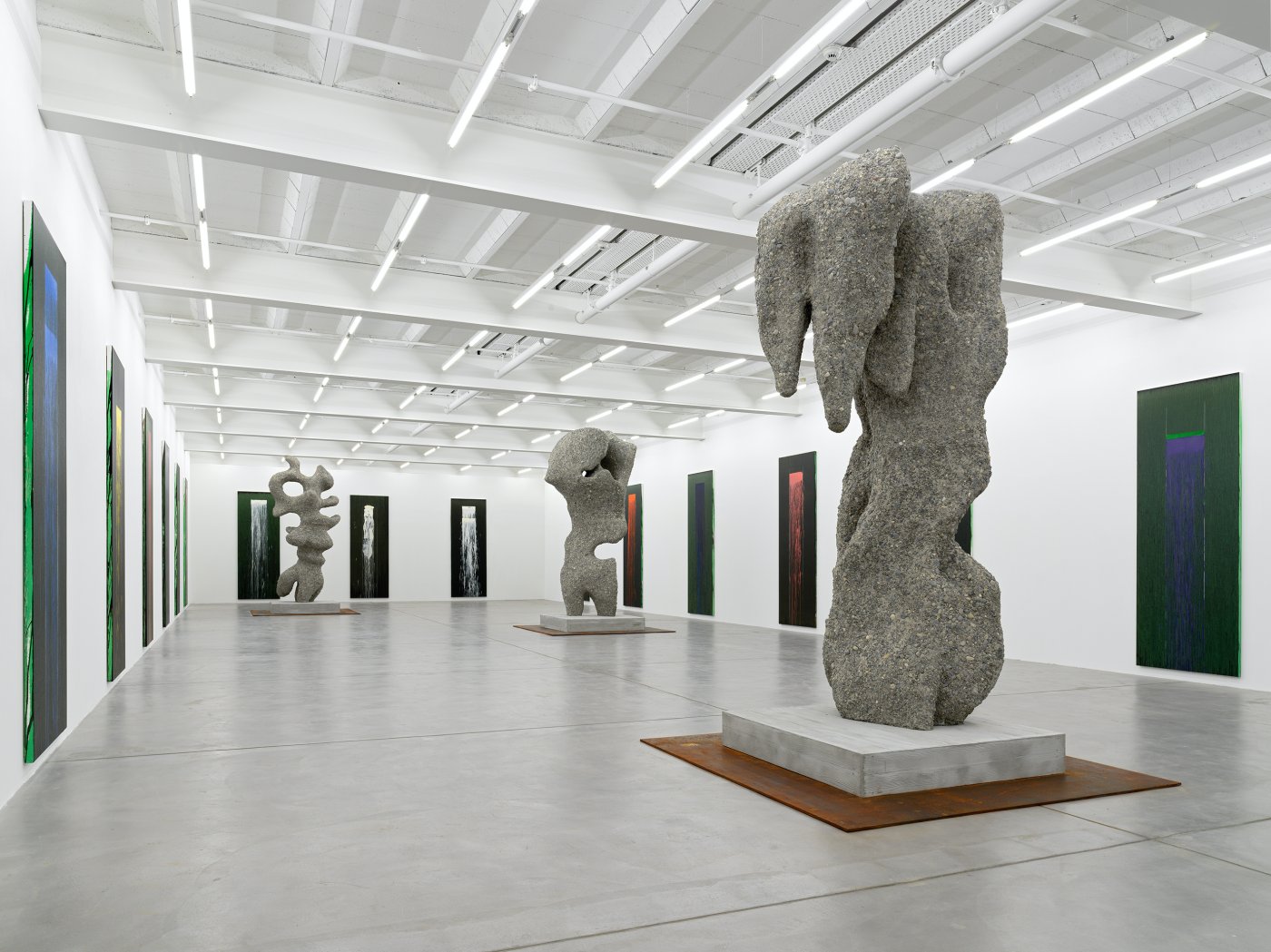 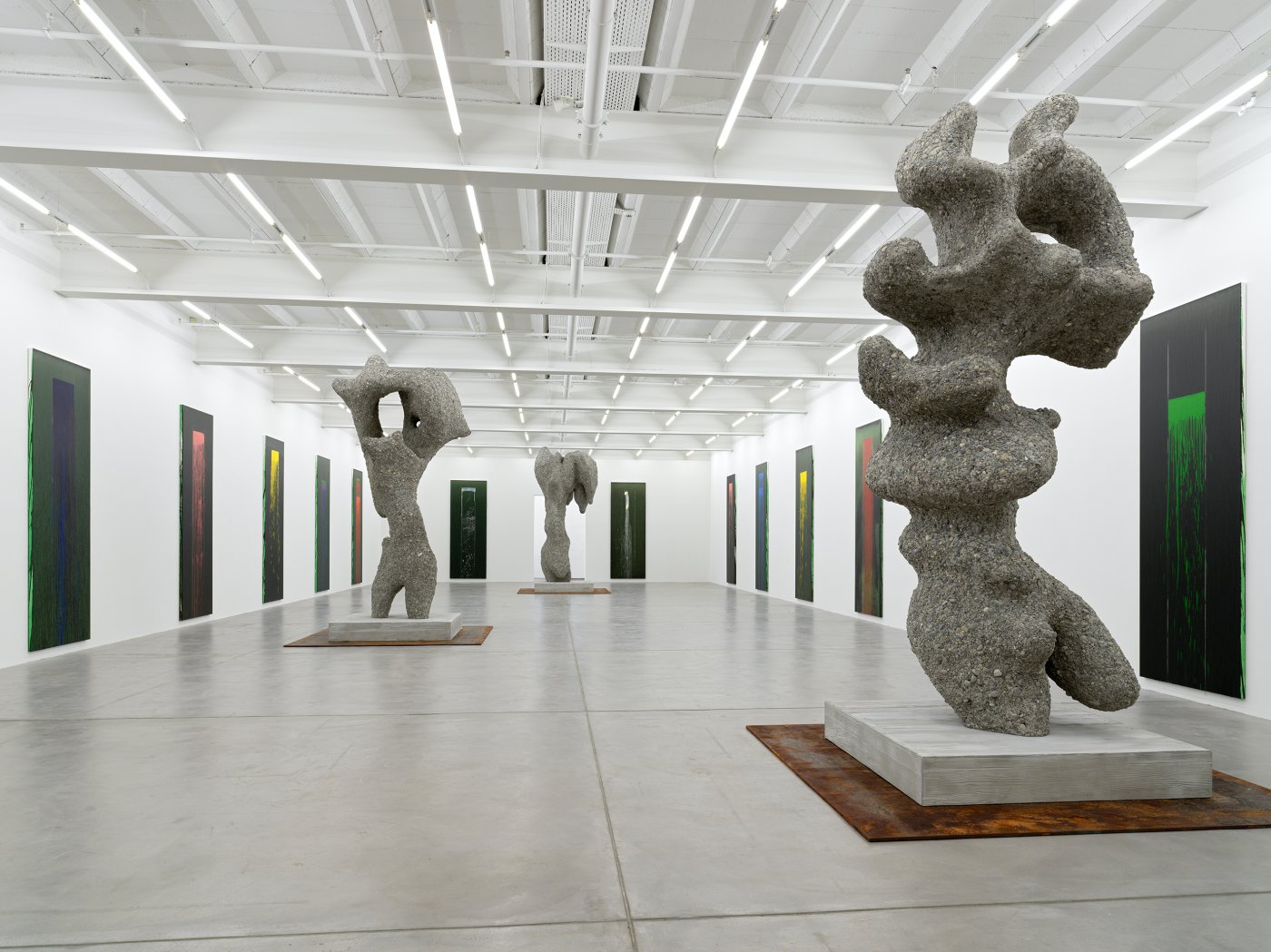 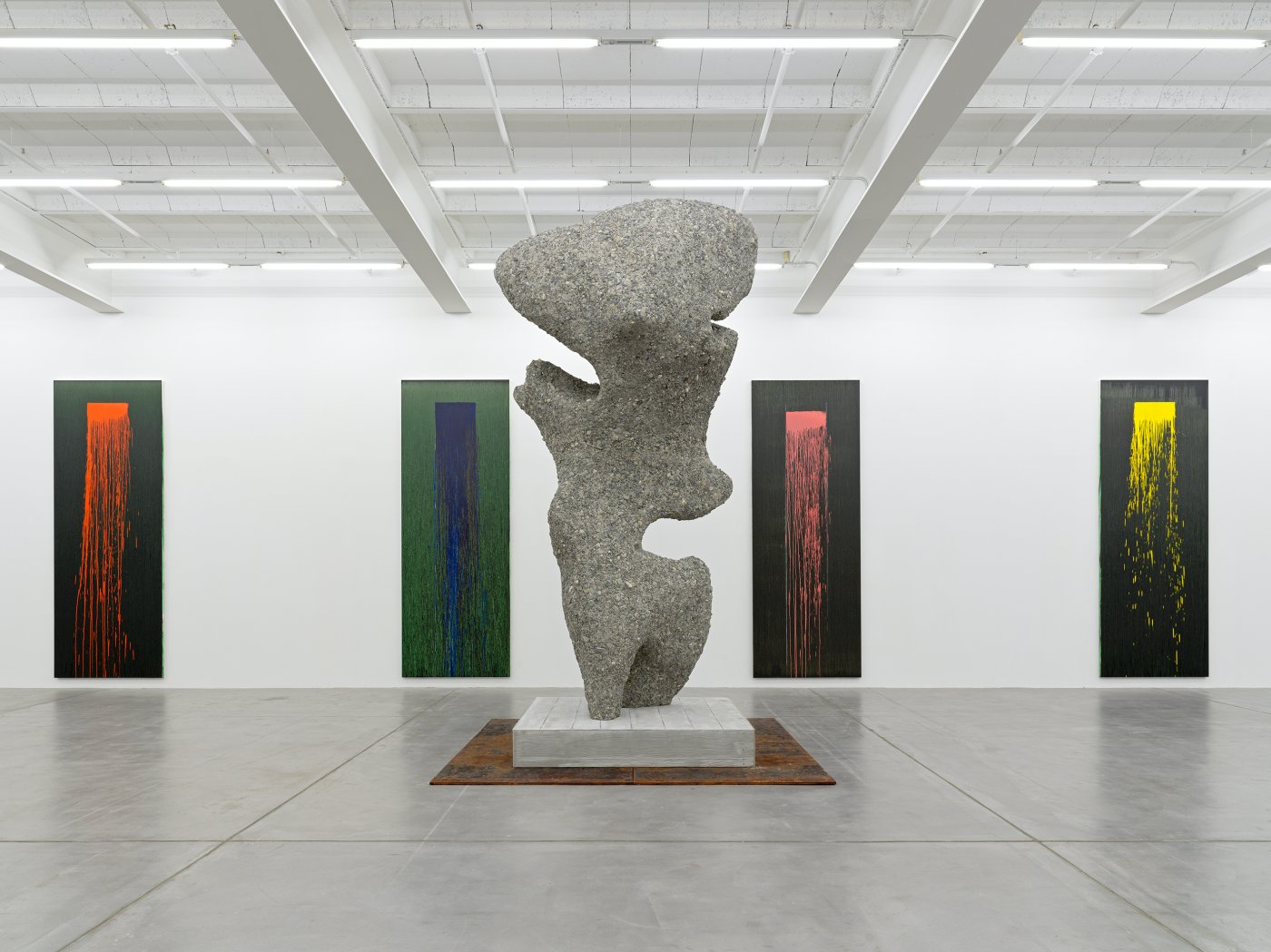 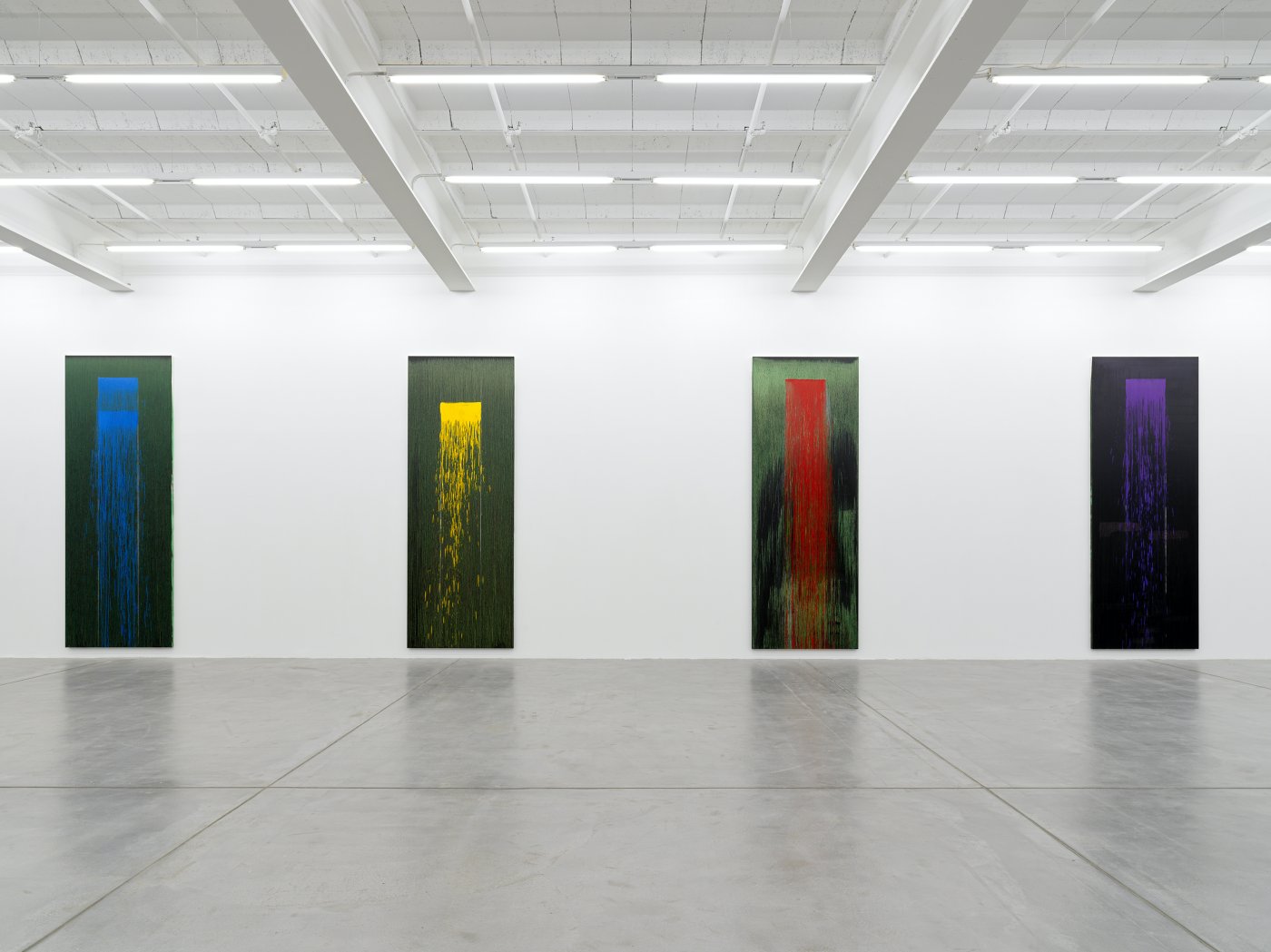 Images courtesy of the artist and Galerie Eva Presenhuber

When considering sculpture, I always remember Marguerite Yourcenar’s beautiful little essay on its inescapable mutability—or perhaps I should admit that what I think of most is simply its title, which she borrowed from a poem by Victor Hugo: That Mighty Sculptor, Time. But while time never ceases to modify the statuary made by human hands, in the case of what are known in China as Gongshi or scholar’s rocks, time (through the random effects of erosion) may be the sole author. One might be tempted to see a certain irony in Ugo Rondinone’s effort to represent these fascinating little objects in their full dimensionality on a monumental scale—a technical feat that leaves nothing to chance or the long rhythms of nature—but there’s much more to it than that.

Here, Rondinone exhibits the final three of a group of 20 sculptures, each named after one word from a self-written poem of 20 words: “we run through a desert on burning feet, all of us are glowing our golden faces look twisted and shiny.”; these are faces, look, and twisted. Conceived in 2007, these were the first of Rondinone’s works to employ stone among their materials; they foreshadow in that sense the stone figures and columnar “mountains” he would later construct. With their gray surfaces of pebble-studded concrete, these sculptures don’t pretend to reproduce the stones on which they are based. The artist calls these expansive, sinuous, unstable forms “clouds,” and their continuously metamorphizing shapes earn the name. Yet I myself would rather speak of smoke, of those puffs of gray that linger in the air above a smoker’s head and twirl as unpredictably as his slowly revolving thoughts—“Toute l’âme résumée / … / Dans plusieurs ronds de fumée / Abolis en autres ronds,” as Stéphane Mallarmé wrote: The whole soul summed up in so many rings of smoke that lose themselves in other rings. Indeed, the form of these sculptures is absolute fluidity, like the water that is time’s main sculpting tool in the making of scholar’s rocks. Even scaled up to two or three times human height, they’re too involved in flowing in and around and out of themselves to care who’s looking; they don’t dominate the viewer. But neither do they let themselves be easily known. Not only are they filled with unexpected nooks and crannies, but their appearance from any one side reveals nothing about how they will look from another vantage point. The more attentive the viewer, paradoxically, the more likely it may be that he or she will become so entranced by the individual details of the sculptures’ constantly mutating form as to lose track of the whole. One finds oneself circling and circling them, not even quite sure at first whether one has come back to where one started—because everything constantly looks different, reveals ever-unfamiliar aspects. And then there’s the pareidolia: These abstract forms are full of faces. Don’t you experience your gaze being caught by other, uncanny gazes as the many apertures in the sculptures’ forms transmute into eyes that question you just as intently as you examine them? In the unending process of perception, is the perceiver ultimately the one who’s perceived?

If Rondinone’s homage is to that mighty sculptor, time, one might well adapt Yourcenar and Hugo’s phrasing to say that Pat Steir puts her faith in that virtuoso painter, gravity. Accepting Rondinone’s invitation to exhibit together, she has made a group of new paintings that match his scholar’s rock sculptures in scale—each canvas is eleven feet tall—and, just as important, in inspiration. Steir, too, finds a stimulus in the arts of China. As she once explained to The Brooklyn Rail publisher Phong Bui, it was “looking at Chinese Literati paintings and at Southern Song Dynasty pottery and painting” that convinced her that she could “use nature to paint a picture of itself by pouring the paint. That gravity would paint my painting with me.” Here is where we find the piquant contrast between these two juxtaposed bodies of work: In these sculptures, Rondinone has not harnessed the action of nature but represented its effects, using the artifice of technique to make those effects more perspicuous and, as it were, physically involving, while Steir has drafted nature as her collaborator. Steir speaks of John Cage as a major source of inspiration, along with Agnes Martin, Sol LeWitt, Robert Ryman, and the practice of meditation. Understanding that Cage used the I Ching to create a kind of nature-like chaos, and inspired by his daring and poetry, Steir developed her practice of employing nature, so to speak, as her studio assistant. By putting down her paint in a very emphatic, even willful way and then letting gravity take the paint where it should go—using this fundamental force to interpret and extend the consequence of her gesture on a scale beyond her own physical capacity—she gives color a monumental impact. In these Flags for Ugo, it’s not a question so much of seeing the various hues as of experiencing them: The effect is that physical.

And yet, the paintings are full of subtlety, of nuance. The grounds may be nocturnal in tone, but far from colorless, they are chromatically rich enough to have been finished paintings in themselves. The brighter hues (or white) like columns at the center of each canvas may seem to assert themselves as figures before those grounds, but notice how, as each color dissipates itself in traveling down the length of the rectangle, it seems to rejoin the ground as one more tinge or nuance in its complex amalgam of tones. A dichotomy is posited and then overcome.

Sanctuary through the Work of Zac Hacmon. “Hac