From inside the traditionally austere, academic confines of Houston’s Museum of Fine Arts blooms a rainforest of change – Beatriz González: A Retrospective is a breath of fresh air in the otherwise lagging Houston arts landscape.

Houston, TX is a city with a thriving economy, diverse viewpoints and fantastic art to go along with them; however, in my time here I have found these facts are not often reflected in Houston’s local arts landscape. The city boasts many art museums and a handful of galleries, many of which contain spectacular collections that help them retain world-renowned status (the Menil and its offshoots, the MFAH, the CAMH) but rarely do any of them showcase art that reflects the personality of Houston – multilingual, brightly colored, with a unique and frequently loud viewpoint. Beatriz González: A Retrospective, on show at the Museum of Fine Arts Houston from October 27, 2019-January 20, 2020, is a welcome exception.

Located on the upper deck of the MFA, the works of Beatriz González are simultaneously eye-catching and hidden among the architectural confines of the museum space. The exhibit opens with the blown-up image of the artist herself: A true baddie before her time in a white turtleneck and gingham trousers, looking determinedly into the distance whilst framed from behind with one of her more well-known pieces, one of the three versions of The Suicides of Sisga, 1965. The image is just enough to catch one’s attention, although it does not come close to portaying that just beyond it unfolds a spectacular art show filled with murder, color, textile, political tumult and resistance.

The general walkthrough of the show is largely undefined, apparently chronological, and naturally graceful, peaking at its center in the large rotunda that holds some of the larger craftspieces of the González collection on display. Viewers trace the works of Beatriz González from her initial curious experiments with color and photographic inversion (Vermeeriana I, 1964)  to her continued fascination with the intersecting themes of the press, religion, and death (Los Suicidas del Sisga I, II, & III, 1965) to her artistic resistance via Western iconography and devalued Colombian craft (Nací en Florencia y tenía veintiséis años cuando fue pintado mi retrato (esta frase pronunciada en voz dulce y baja, 1974) and finally to her more obvious, in-your-face, graphic portrayals of the pressures of political instability (Los predicadores, 2000; Papel de colgadura Desplazados, 2017).

This particular retrospective is both inspiring and extremely frustrating. Inspiring because the works of Beatriz González are as numerous as they are endlessly fascinating. Frustrating because this is “the first large-scale U.S. exhibition dedicated to the work of [the] Colombian artist”[1] and González’s work is fantastic. Although the majority of the pieces are older, the collection maintains contemporary edge and is particularly well-suited to Houston: Gallerists the world over will tell you that paint is coming back into vogue. Any glance at the news will tell you that the themes of political resistance that were mainstays of 1950s Colombia are remarkably relevant to the contemporary state of American affairs. The Spanish-speaking population in Texas continues to increase. And the question of WHY are female artists and artists from non-Western canon still so underrepresented and devalued continues to tear at my mind.

Regardless, I’m taking a page from my own “don’t look a gift horse in the mouth” book with this one, Houstonians, and encouraging you to do the same. Get out there and get your good quality culture with Beatriz González: A Retrospective on at the Museum of Fine Arts Houston from October 27, 2019–January 20, 2020. 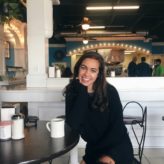 Ariana is an art historian interested in contemporary art and design.