Frieze New York once again enticed viewers on Randall’s Island this year with the global, cultural cognoscenti circulating its booths and aisles last week en masse.  Interspersed throughout its north and south entrances the fair boasted exceptional works representing a broad sampling of artists ranging from those well situated in the contemporary canon to lesser-known established and newly emerging artists.  New curated slots also brought attention to established Lantinx and Latin American artists as well as those fresh on the scene.

In light of the fact that Frieze 2019 granted plenty of exceptional standouts amongst the proliferation of captivating curations, below are those I found to be some of the top takeaways from this year’s crop:

At Magenta Plains Gallery’s booth, two large-scale paintings by the newly represented artist Alex Kwartler were literal and figural eye-catchers.  Kwartler’s brushwork evinced an intrinsic technical facility and pictorial prowess through astute swoops and swashes of subtle but luminous warm and cool color gradation of shifting opacities.  The artist additionally interjected dually frontal and recessive black and white dots (or possibly punctuations?) to add further play with space to trick the eye.  To loosely coin the terms “slacker” or “casual abstraction” would not qualify as an insult as this gestural pair demonstrated ample use of Kwartler’s overt preference for flatness, process-based painting.  Powdered pigment appears to be vertically poured over his surfaces as an after-effect in order to heighten their atmospheric qualities as well as the illusion of depth of field, whilst the low-lying, closely cropped curvatures substantiate the space.

In only its second year of operation, Magenta Plains is a multigenerational gallery located in the Lower East Side and is committed to supporting a roster of emergent art and emerging artists.  Kwartler has since had two solo exhibitions at Magenta Plains: “Pain Quotidien,” 2016 and “Snowflake,” 2018.

For the “Focus” section of the Fair, a framework aimed at featuring curations from galleries fifteen years or younger, Koenig & Clinton grouped Anoka Faruqee and David Driscoll’s multiple disk paintings in conjunction with Tony Marsh’s ingenious and igneous ceramic series, “Crucible.”  By coupling artists routinely engaged in rigorous investigations into form and color, Leo & Koenig emphasized their combined similarities and differences: color and materials, volume and flatness, texture and smoothness.  The ultra-graphic nature of the booth’s presentation amplified the disparateness in their respective technical approaches to staggering effect whilst displaying shared concerns for materiality through the distinctive and traditional genres of painting and ceramics.

Chiaroscuro is inventively realized in Faruqee & Driscoll’s works through the layering and subsequent shifting of multiple circular patterns of color and value contrast on the painting surface.  This technique produces additional morays patterns when viewed up close and reinforces a graphic topology similar to that of electromagnetic fields.  The surface sheen additionally produces an iridescence that causes the work to appear to vibrate and makes for a formidable presence.  Multi-colored acrylic drips on the edges of canvas force us to further ponder this team’s painting process.

Ceramicist Tony Marsh activates both the inner and outer contours of his cylindrical forms with geometric and organic protrusions as well as through drippings from his incidental firing process.  Marsh states in a 2018 interview at Gerald Peters Projects with CFile Editor in Chief Garth Clark, “…I set up conditions wherein unexpected results occur that lead to discovery which stimulates curiosity and innovation. “ These lavalike reliefs reference geological phenomena, landscape, and other forces of nature.  Equally enhanced by the conditions of heating time and temperature, these multifarious vessels are reminiscent of fossilized forms caused by volcanic activity and appear fixed in time.

The “Frame” portion of Frieze New York highlights global representation through solo exhibitions of individual artists in the effort to support emerging artists from around the globe.  One outstanding multimedia piece was from Florence’s Veda Gallery that chose a science-fictional presentation by Danish artist Amitai Romm.  References to the work of Edward Keinholtz abounded in Romm’s installation which is meant to evoke a post-apocalyptic experience complete with stains, satellite disks and scrap metal.  An aluminum rack of digitally-produced, embroidered drawings on transparent fabric offered a strikingly delicate counterbalance to the other, more plastic elements in the display.

A collector’s haven, some startling new works were seen at the London-based Frith Street Gallery booth.  A real draw in this collection was Daniel Silver’s mysterious “Wade” comprised of onyx and marble.  Raised in Jerusalem and educated at the Royal College of Art, Daniel Silver is a British artist whose current work investigates concerns for memory, history, and psychology residing within the genre of figurative sculpture.

Sporting a nuanced gesture by jutting forward slightly at one hip, the figure as smoothened bodice appeared somewhat shapeless and prompted recollections of Rodin’s 1898 studies for “Honore de Balzac.”  The shrouding inherent in its slickened form helped to draw attention to the more articulated head, an area of the body in which Silver likes to focus.  Along with an interest in metaphor, Silver’s concerns also lie in continuing the tradition of bust-making sculpture.  In this vein, Rodin’s notorious Balzac sculpture had beckoned forth the defense of his works at the time when he stated that “a man celebrated for his heart and mind should not be represented by his body.”  Similarly, the lean and somewhat contained treatment of “Wade’s” shrouded body augmented by the materiality of the marble, assists in rendering the figure monolithic and reinforces cerebral references to Rodin’s infamous work, and quote.

Two poignant gems by Tacita Dean were included in Frith Street Gallery’s curation and offered an intimate moment while absorbing the diversified curation at their booth.  Dean is known to be impacted more by concepts rather than process and materials.  “Tacoma Wash,” with its subtle play between the painterly and photographic, imbued a sense of time and place that Dean seeks in her creative lexicon.

Equal in intimacy and sheer poetic beauty was Fiona Banner’s cluster of small and delicate paintings on panel from her “wordscapes” series.  Exploring the complexities in text and visual language, the works depicted oversized punctuations floating in a seascape of what looked like a plurality of impending storms.

Gagosian boldly reframed posthumous painter and sculptor Steven Parrino in a very well-choreographed and compelling presentation that, not surprisingly, drew a lot of audiences.  The diverse showing of Parrino’s works made for high impact and included a mix of drawings, paintings, and aluminum sculptures often noted as explosive expressions of the time – nihilistic punk and post-punk angst.  Dispersed throughout the booth were Parrino’s trademark anthropomorphic, monochrome paintings, deconstructed and/or laden with exquisite petroleum flourishes.  Decades later, they still engage the viewer in dialogue around counterculture and the subject/object debate whilst inculcating an undeniable monumental presence.

Last but not least, Andrew Kreps Gallery showcased He Xiangyu’s hyper-realist resin and fiberglass Lemon Pickers in tandem with his vibrating Lemon abstractions, and they paired nicely.  A transdisciplinary artist who splits his time between Beijing and Berlin, Xiangyu’s work is known to explore the manipulation of content in relation to material.  Thus, the divergent two and three-dimensional treatments of the signified here carried plenty of visual punch for both short and long-term gazing.  Barring any intentions to end on a sour note, Andrew Kreps Gallery did give us lemons, but He Xiangyu chose to make no lemonade. 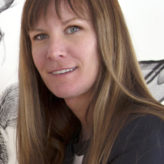