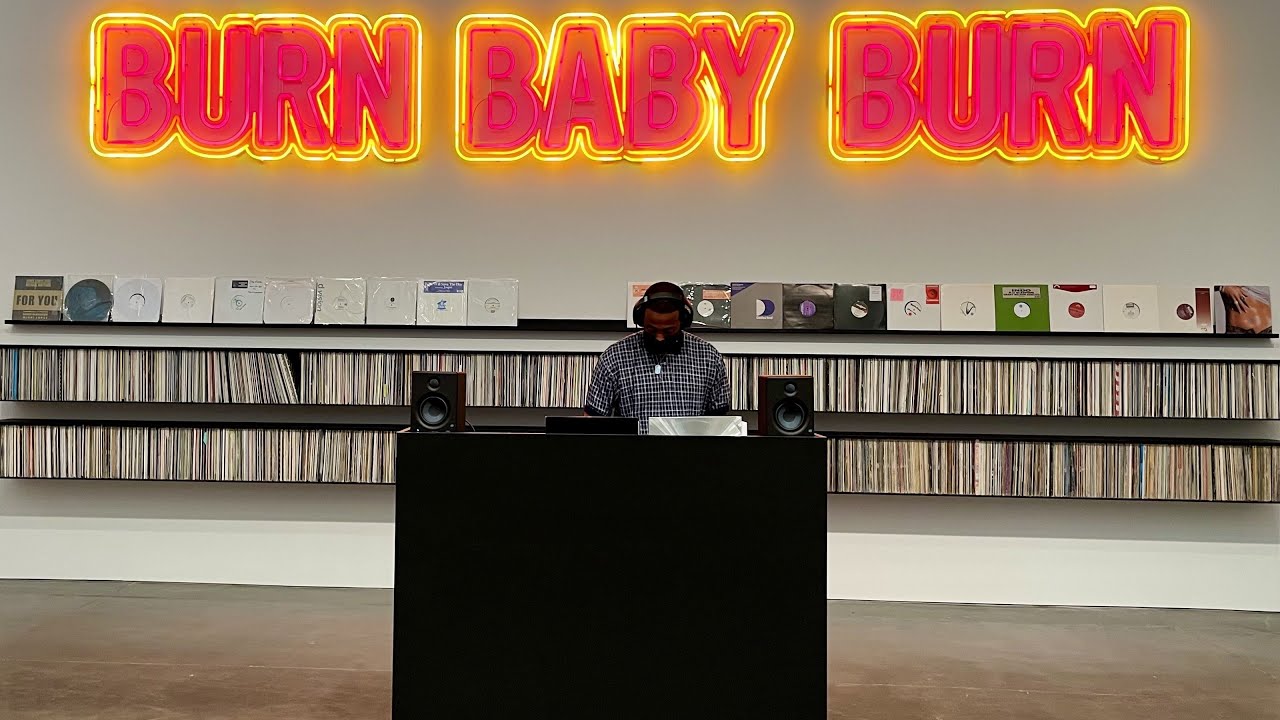 Social Works considers the relationship between space—personal, public, institutional, and psychic—and Black social practice. With a wide range of material and theoretical approaches, the work on view is united by a conscious engagement with today’s cultural moment, in which numerous social factors have converged to produce a heightened urgency for Black artists to utilize space as a community-building tool and a means of empowerment.

Known for his masterful use of light, shadow, and space, as well as his integration of diverse forms, David Adjaye approaches architecture as a way to promote inclusive accessibility and to reflect upon the human legacies embedded in the built past. Asaase (2021), his first large-scale autonomous sculpture, is a maze of nested earthen walls that climb to a conical vertex, referencing historic works of West African architecture such as the Tiébélé royal complex in Burkina Faso and the walled city of Agadez in Niger.

Theaster Gates’s installation is dedicated to the legendary DJ Frankie Knuckles, the “Godfather of House Music” whose pioneering sounds shaped the Black- and queer-led 1980s house music scene. A collaboration with the Rebuild Foundation—Gates’s Chicago-based nonprofit organization focused on art, cultural development, and neighborhood transformation—the work features a special display of over five thousand records from Knuckles’s personal archive, many of which will be digitized as they play in the gallery.

Throughout her fifty-year career which includes opening Just Above Midtown, one of the first galleries in New York to focus on work by artists of color, in 1974, Linda Goode Bryant has created spaces that allow Blackness to resonate across personal, official, and public domains. Made in collaboration with architect Elizabeth Diller, Goode Bryant’s Are we really that different? (2021)—an installation featuring an operational farm and a new video—brings together her work as a filmmaker and gallerist with Project EATS, the urban farming organization she founded in 2009, highlighting the symbiotic, and often parasitic, relationships between humans and nature that arise in the modern industrial world.

Lauren Halsey draws on Afrofuturism, funk, and her South Central Los Angeles roots to construct radical visions of urban life. Halsey’s “box” sculptures comprise acrylic blocks emblazoned with colorful fragments of commercial signage, graffiti, and other examples of the community-based hieroglyphics that give visual life to her neighborhood. They acknowledge South Central’s past as well as its imagined future, but also conjure an improvisational fantasy space where imagination, celebration, and self-reinvention are collective phenomena.

Titus Kaphar’s art deconstructs existing representations and styles, seeking to dislodge history from its status as “the past” in order to understand its continued impact on the present. In 2015, Kaphar cofounded NXTHVN, a nonprofit arts hub in Dixwell, New Haven, Connecticut, that provides fellowships, residencies, and professional development opportunities to artists, curators, and students. For Social Works, Kaphar presents his painting A bitter trade (2020), which he whitewashed for a live NXTHVN event in 2020.

Alongside Kaphar’s painting is a selection of diverse artworks by five artists, all former NXTHVN Studio Fellows, that offer fresh meditations on the Black body’s use of space. Overlaying literary and archival materials atop photographs, Zalika Azim explores personal and collective narratives as an avenue for investigating their larger effects on memory, lineage, possibility, and belonging. Allana Clarke’s sculptures and performances destabilize ideas of beauty, care, and labor, seeking to replace them with an unbounded approach to physical and psychological existence. Weaving the written word—both materially and conceptually—into intricate drawings, Kenturah Davis underlines the fundamental role that language plays in the shaping of personal and public identity. Christie Neptune’s photography and video works capture precise moments, drawing attention to the charged interactions between society’s structures and those that they categorize and constrain. Populating shaped canvases with sleek forms that recall the medium of collage, Alexandria Smith’s dreamlike allegorical paintings visualize the many unspoken roles, contradictions, and uncertainties impressed upon the Black female body.

Rick Lowe’s abstract paintings allude to a phenomenon that he terms “domino culture”: the social spark and unique joining of lives that comes about through the game. Lowe, who founded the art-based community platform Project Row Houses in the Third Ward of Houston, Texas, brings his approach to social commitment to a new series of canvases that memorialize the 1921 Tulsa, Oklahoma, massacre—where white supremacists razed the city’s Greenwood District, the prosperous neighborhood known as “Black Wall Street”—and commemorate the resilience of the survivors who rebuilt their hometown from the ground up.

In Carrie Mae Weems’s photographic series Roaming (2006) and Museums (2006–), the artist—clad in a flowing black dress and facing away from the camera—appears at numerous sites: Roman palazzos, rustic paths, and stately museum facades. Poetic and emotionally charged, the images meditate on the “edifices of power” that racialize, sexualize, and confine the human body. Yet Weems’s presence holds a calm dominion over these expansive spaces; she inhabits and confronts each site with quiet dignity, asserting her indelible freedom to roam.