As night falls over Champagne, Illinois drivers on Peabody Drive will witness auras of pink, green, and aqua wash over the darkening sky. The source of the luminescence is the Krannert Art Museum and the colossal inflatable sculptures ever-visible through the Kinkead Pavillion’s glass entrance. Hive, the site-specific sculpture and sound installation by Nancy Davidson and Lakshmi Ramgopal introduce saturated colors, feminine vocalizations, and classicizing influences to the building’s 1988 post-modern architecture. Inside the museum, Ramgopal’s audio, a nuanced selection of breathing techniques both natural and algorithmically generated, reverberates around the Pavillion and fills Davidson’s gigantic pink and red inflatable forms with anthropomorphic qualities. Arte Fuse had the pleasure of catching up with Davidson post-installation to chat about the inspiration for Hive, the year-long process of realizing the sizable installation, and reflections on their experience as first-time collaborators.

KH: Hi Nancy, thanks for taking the time to speak about Hive. I have so many questions about your recent site-specific sculpture at the Krannert Museum. Let’s jump in! How did the project come to be and when did you first meet your collaborator Lakshmi Ramgopal or co-curators Amy L. Powell and Clara Bosak-Schroeder?

Nancy Davidson: I first met Amy Powell, curator at the Krannert Museum in May of 2017 while visiting the University of Illinois to attend my granddaughter’s graduation. After walking through the museum, Amy invited me to send a proposal for an installation.

That evening as I was walking around the campus I saw the museum’s Kinkade Pavilion’s architecture illuminated like an ancient site. Growing up in Chicago I often visited the Field Museum and the Museum of Science and Industry. Both of these structures have a “Porch of the Maidens”. I immediately imagined bringing my version of the maiden’s to the Kinkead portico as an homage to the classical period yet with a twist.

After reading my proposal Amy Powell decided to bring Clara Bosak-Schroeder, a Classics professor, into the project as a co-curator. The three of us were searching for a sound artist to create a voice for these ancient maiden/goddesses. Clara’s search brought Lakshmi Ramgopal to our attention, she is both a sound artist and a classics professor. We met a year ago at the site and immediately understood each other and shared ideas about the exhibition.

The four of us have different concerns and interests in our work, yet we agree on so many specific aspects of the project including the ideas around the female body and the cultural need to control female display. We have also discussed gender identity as unpredictable and uncontrollable.

KH: In previous bodies of work, you utilize cultural figures or allegories as inspiration for work. Can you describe how Hive addresses the figure of Artemis of Ephesus as well as Caryatids?

ND: All the ideas about popular tropes and stereotypes I had previously worked with were imbedded in the rodeo cowgirl. For example my project, Dustup, I focused on the American cowgirl as an image and fantasy. The image and mythology of the goddess similarly intrigued me.

Artemis of Ephesus stands out as an enigmatic figure. With her exaggerated multi-breasted signaling fertility, she was already a hybrid form; a combination of the Greek goddess of the hunt with the near eastern maternal deity of Great Mother. Blending the third identity, that of caryatid, seemed perfect.

Caryatids are used as architectural support pillars or columns. The braids function visually in a similar way. I imagine these ancient dancers standing still for a moment that has lasted through time. I keep asking myself the question, “why is the goddess trope reappeared at this cultural moment?” One has to look no further than the pop star Lizzo to see the goddess effect.

My maidens are mirrored bilateral sisters, not exactly twins, in shades of red. They are hybrids, wandering between goddess and maiden; fertile goddess and virgin maidens, their long hair, falling in a loose braid down the back, presumably signals their unmarried status. Hive’s thick braid underscores her hybrid nature. The sculptures, cross over from classical to grotesque to cartoon in contemporary representation.

KH: Practically speaking, how did you fabricate the work for Hive?

ND: I work with an amazing team of fabricators at Landmark Creations. My first piece fabricated by them was “Double Exposure”, a commission for the Corcoran Museum of Art, 2002.

KH: In the year leading up to the show did your initial vision for the work change much?

ND: The form and structure for Hive went through several changes. Even though I utilized digital renderings to visualize the work I decided it would be beneficial to build a half-scale model to double-check my decisions. Rigging the scale model in my studio also helped the crew at Illinois anticipate what to expect. The final addition was the giant golden scrunchies around the braid, a favorite of the staff!

KH: Your larger than life sculptures and the architecture in which they are displayed encourage viewers to get closer. How do you envision visitors interacting and experience the work?

ND: Most public work catches the viewer by surprise, an unexpected discovery. Hive directs the viewer. A negotiation takes place. It offers an unfolding series of experiences. Like a street festival or parade, the audience can see the work from multiple perspectives. The installation functions as a public work, visible 24/7, there is no limit to when it can be viewed.

Once inside the pavilion the sculpture’s scale, lighting display, and haunting voice dominate the space. They pass colors back and forth like Morse code. Can the sculptures communicate with each other through a series of color and light exchanges similar to the light sequences in “Close Encounters of a Third Kind”? Does the use of light as a conversation suggest extra-celestial signaling? In the writings of Homer humans often felt the presence of goddesses even before they materialized. How audiences react is an open question.

KH: You’ll be giving an artist talk during the opening reception on January 30th. What are you hoping to touch upon about either your practice or process?

ND: Giving a talk allows me to share the works of art that influence me. I’ll quickly move through an overview of my work and then share examples of women artists who create temporary monuments and gigantic sculptures.

One of my favorite pieces is by Nicky de Saint Phalle in collaboration with Jean Tinguely in1966, titled “Hon”. Visitors who entered through an opening between the legs of the sculpture can access the milk bar and a movie theater within. Another favorite of mine is “A Subtlety, or the Marvelous Sugar Baby” by Kara Walker, 2014. Above all, I’m most eager to hear from the audience during the talk!

KH: Nancy thank you for taking the time to walk us through the many facets of your latest work Hive. It was very insightful.

ND: Hive, the site-specific sculpture and sound installation by Nancy Davidson and Lakshmi Ramgopal will be on view at the Krannert Art Museum until January, 23rd 2021. A public opening reception and artist talk in conversation with co-curators Amy L. Powell and Clara Bosak-Schroeder will take place in the KAM Auditorium on January 30th, 2020 from 5-6 PM. 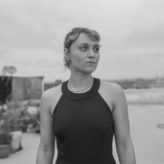