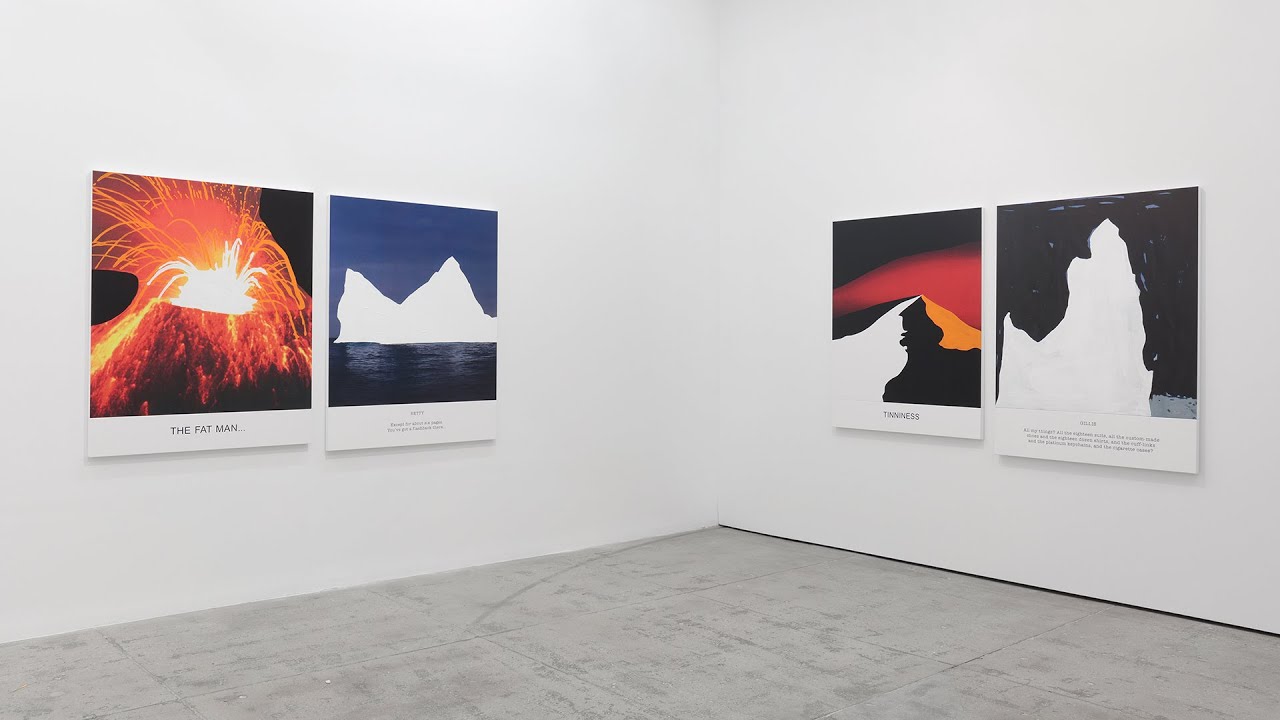 Marian Goodman Gallery New York is delighted to present Hot & Cold, a new body of work by John Baldessari which will open on Friday May 3 and be on view through June 15, 2019.

Departing from the art historical canon to explore an entirely new subject matter, Baldessari focuses our attention on the physical world in this new body of work, featuring icons and events of natural phenomena which give new expression to the artist’s hybrid forms, exploring motif and ground and the relationship of painting to photography, image and language.

Intrigued by the activity and geometry of land masses, Baldessari abstracts visual conventions of landscape, playing with surface forms whose scope and scale provoke a sense of the sublime and the cataclysmic. Presented as diptychs, Hot & Cold unites polarities of surface and depth, chaos and containment, through counterpoints of subject, form and color, highlighting the dialectics of figure and ground, and positive and negative space. Moving from the single frame wherein he would work additively often compressing visual signifiers into one support, Baldessari’s new bifurcated form allows images to contest one another, allowing for an uneasy tension in their collision.

Through these symbolic inversions and transposition of fragments from landscape and photography, Baldessari creates a third reading in Hot & Cold with his application of found texts, taken from an encyclopedic collection of aphorisms and phrases.

John Baldessari was born in 1931 in National City, California. He currently lives and works in Santa Monica, California. Recent solo exhibitions include Learning to Read with John Baldessari, Museo Jumex, Mexico City (2018); John Baldessari: The Städel Paintings, Städel Museum, Frankfurt Germany (2015), 1+1=1 at Garage Center for Contemporary Culture, Moscow Russia (2013) and Video Works 1970-1977 at the Stedelijk Van Abbemuseum, Netherlands (2012). Baldessari’s work was the subject of the major retrospective, Pure Beauty, which retraced his career from 1962 to 2010. Organized by Tate Modern, London, the exhibition travelled to MACBA, Barcelona; LACMA, Los Angeles, and the Metropolitan Museum of Art, New York from 2010-2011. His work was included in the 47th Venice Biennale (1997), 50th Venice Biennale (2003), and 53rd Venice Biennale (2009) where he won the Golden Lion Award for Lifetime Achievement, the Carnegie International (1985-86), the Whitney Biennial (1983), as well as Documenta V (1972) and VII (1982). John Baldessari has been the recipient of many prestigious awards, including the 2015 School of the Museum of Fine Arts Boston Medal Award and the 2012 Kaiserring Award by the city of Goslar, Germany.