Curated by Natasha Marie Llorens, the group exhibition currently up at CUE Art Foundation, Original Language, might at first appear like an all-too-timely response to sundry news headlines traversing the hive-mind of social media. As Stendhal once wrote, “Politics in the middle of things that concern the imagination are like a pistol shot in the middle of a concert. The noise is ear-splitting and yet lacks point. It does not harmonize with the sound of any instrument.” Upon careful reflection, however, Original Language is not even a “political” show, properly speaking. Rather, it attempts to expose ubiquitous structures, whose substance is porous like a language, showing their role in ordering our understanding of what it means to live in a multicultural society.

Comprising of the work of six artists, I’ll hone in on Wilder Alison’s installation for brevity’s sake. Descriptively titled, “ARE YOU THE GOODS?” Alison has created a sort of scaffolding of paper bags in the manner of a friable sculpture. Affixed to these bags is a dream-like language—one which is rooted in an actual dream she had. The verbal logic intrinsic to dream formation (which dramatizes puns, along with other semantic condensations and displacements) is concretized by the French term “les biens,” and its homophonic mistranslation as the English “lesbians.” Looking at this work, I experienced an anxiety-inducing tension—like a creeping stalker in the shadows of night. TU ES LES BIENNES? (“Are you the goods?”) Here, language has the function of presuming certain power relationships, from which the subject (in this case, the artist) struggles to untangle herself.

Alexandra Bell’s incredibly powerful contribution to the show operates on a similar level. Less an installation than a crash course in how to see (and thereby decipher, read), Bell has mounted prints of the Daily News articles that reported on the sexual assault of Trisha Meili—better known as “the Central Park jogger.” Working with primary sources, No Humans Involved: After Sylvia Wynter examines the use of language on each newspaper page. Highlighting instances of incendiary and even racist reportage, Bell brings to light a new narrative: one that openly condemns the falsely accused “Wolf Pack.” If one ventures back to the year 1989, this species of moralistic journalism probably flew under the radar, appealing to a politicized urgency to do something in the face of NYC’s escalating crime rate. But Bell’s document is not partisan; it’s a structural analysis. The same kind of presumptive rhetoric abounds in today’s journalism—perhaps in even more minute and difficult-to-detect forms.

Ultimately, Original Language is about seeing. I’ve only mentioned a couple of artists in the show; but there’s really no work on exhibit that feels lazy or out of place. One qualm I might have concerns the casual way works are put on display. When I visited the show, I didn’t initially connect Al Freeman’s Alphabet series (which, again, examines the all too tacit ways in which language and sense-making unpacks into rituals of oppression) with the works located in the main room. But this could very well be a trenchant curatorial decision. The structures that the show analyzes can easily be overlooked as a matter of course. Original Language asks the viewer to see the world in such a way that these structures lose their cloak of invisibility. Doing so, it’s possible to become disabused of their illusive potency. 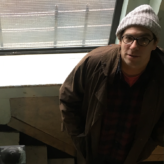 JEFFREY GRUNTHANER IS A WRITER BASED IN NEW YORK. THEIR ARTICLES, REVIEWS, POEMS AND ESSAYS HAVE APPEARED VIA DRAG CITY BOOKS, BOMB, ARCHINECT, FOLDER, ARTNET NEWS, THE 2016 QUEENS INTERNATIONAL EXHIBITION CATALOGUE, IMPERIAL MATTERS, AND OTHER VENUES.