Containers and Their Drivers (or alternatively, Contain-uhs and Their Drive-uhs) is the first comprehensive survey of the work of British artist, Mark Leckey, to appear in the United States. The show occupies two full floors of MoMA PS1’s expansive, industrial space, showcasing Lecky’s work from the early 1990’s to today. Attempting what the exhibit text refers to as, “trying to reinvigorate culture’s phantasms,” Containers and Their Drivers uses the exponential expansion of material culture in the contemporary age to explore cultural and historical meaning under conditions of neocapitalist variety and repetition.

Where similar retrospectives highlighting a lifetime of work often become thematically disjointed due to the decades of content covered by the artist, Containers and Their Drivers is remarkably cohesive. This cohesion derives at least partially from Leckey’s own tendency toward natural history museum-style display in works like The Universal Addressability of Dumb Things, GreenScreenRefrigeratorAction, and 2016-1964 AD. In each of these spaces, Leckey employs decidedly anthropological mediums—dioramas, lectures, life-sized recreations, historical analyses, and collected artifacts—to explore the question phrased in the retrospective text as, “what common culture will survive an era of technological ‘convergence?’” This central research question provides a pre-established curatorial strategy that curators Peter Eleey, Stuart Comer, Jocelyn Miller, and Oliver Shultz executed admirably, tying each individual show into a greater understanding of the whole.

Felix the Cat, the clear focal point of the retrospective, is Leckey’s central example of an enduring artifact of common culture. The history of this polysemic character goes hand in hand with the advent of commercial television, according to Leckey’s slideshow and lectures on the subject, as Felix the Cat was the very first content to be broadcast on live television. He was the first cartoon to be monetized through dolls, trinkets, and apparel, and paved the way for a long line of other famous televised cats. The results of this sizeable legacy infuse the show—whether Felix appears in the form of a bodiless balloon head, a massive inflatable body, a mathematical analysis of a tail, a collage, or vintage photographs—lending even Felix-less spaces with a trace of his influence. He is what Leckey calls a “familiar object full of voices” and an effigy of the pivotal union between American commercial and popular culture—an incredibly visible, controversial, and problematic dynamic today.

The consequences of this dynamic play out in the rest of the show through what the retrospective text describes as an examination of “the dissolving edges between objects… we possess, and those that possess us.” The power of Felix the Cat is that he haunts history through his recognition as a possession—he has common meaning because so many people have both literally and figuratively bought into it. However, other more anonymous and unpopular artifacts in The Universal Addressability of Dumb Things become mere filler in a cabinet of curiosities rather than signifiers, reminding viewers of the myriad marginalized artifacts that are rendered voiceless by dominant narratives. Leckey himself acts as this dominant voice by literally silencing his breakout video Fiorucci Made Me Hard Core, divorcing dance in British club culture from its contextual sound and thus reimaging his subjects’ movement as disjointed, inebriated spasms. This piece, paired with the commercial deification of domestic products in GreenScreenRefrigeratorAction, becomes a disturbing example of how a dominant voice, in this case Leckey’s, can enact meaninglessness on a demographic and fill that void with consumerism.

Overall, Containers and Their Drivers preemptively remembers contemporary history as one of material excess to the point of banality, cyclically inspiring feelings of emptiness that can only be filled with things. Despite the heft of this accusation, the incessant humor of Containers and Their Drivers allows viewers an absurdist reprieve from an otherwise bleak, neocapitalist reality. The vapid quality of the material culture Leckey showcases does not have to prophesize an inevitably dystopic vision of how contemporary culture will be remembered in natural history museums of the future. Rather, the enduring whimsy of Leckey’s subject matter can serve as a reminder that meaning is what we make of it, collectively or individually. While this take-away by no means lessens the severity of Leckey’s indictment of present-day material culture, it prompts audiences to exercise creative agency and criticality when assigning significance to their own artifacts rather than allowing a dominant voice to do it for them. While Leckey has clearly picked up some skills from natural history and anthropology institutions, these museums too have much to learn from his pithy, playful, and haunting artistic practice. 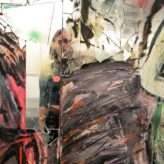 Rica Maestas is a post-modern New Mexican with a soft spot for inappropriately placed religious iconography, social practice artwork, and making connections between things that aren’t related. She is an aspiring Public Human (MA) at Brown University as well as a fervent dog-lover and anarchist. She pines for her lover—Los Angeles—every day.