The largest of Suellen Rocca’s paintings in her first solo exhibition in New York appeared to have been injected with an active culture of miniature icons, energetically seeping into every available compositional crevice or else organized along vertical lines that lent a diligent sense of order. Beyond the immediate recognition that may have arisen from these lines of symbols and their evocation of an iPhone screen, a closer examination revealed them to be outlines of traditional emblems of femininity – the profile of a dress, of a bathing suit, of a woman’s shapely figure. Though masses of these pictographs inundated the twenty-four works on view, all from 1965-1969, their methodical arrangement into vignettes or orderly lines bespoke of Rocca’s interest in diagramming these ubiquitous cultural symbols of feminine beauty and desire.

In the late 1960s Rocca was one of two female members of the Hairy Who, a group associated with the Chicago Imagists who were known for their hyperactive, brightly colored, and surrealist aesthetics. Rocca focused in particular on the cultural signifiers of femininity found in the media, especially those meant to entice the female consumer. Outlines of stilettoed legs, handbags, necklaces, ice cream cones, and diamond rings were repeated throughout the exhibition, including on the four small purses decorated with radiating lines predictive of Keith Haring, kissing couples, and mm’s and ahh’s of satisfaction.

These emblems of feminine consumerist desire as described and prescribed by the magazines, romance novels, and television advertisements of the time were instantiated in a particular image that was repeated throughout Rocca’s paintings – a female in profile, depicted in such a way that the curvature of her chest and the coy, delicate placement of her hand on her shoulder received particular emphasis. This woman was meant to be looked at, and her deliberate positioning into the most flattering angles indicated her awareness of this expectation.

The exhibition was anchored by four large, energetic paintings featuring cartoon-like tableaus or hieroglyphic icons that attempted to stratify and diagram the processes by which one arrives at such an idealized female form. In Bare Shouldered Beauty, four female figures assumed similar poses and decreased in size. Surrounding them were vertical storyboards depicting quotidian scenes and miniature female figures that tightly hugged the outlines of their legs, as if to define or constrain. Nearby, The Pink Creature on TV and Bare Shouldered Beauty and the Pink Creature incorporated a similar tableau that included a more obvious nod to media influence. In both paintings, an amorphous pink figure – bearing faint outlines of breasts in the former work – was shown emitting a speech bubble of Rocca’s posing female figure in profile, with a set of television or radio knobs below hinting at the scene’s media origins. A pliable woman in formation, the figure appeared to be summoning the neatly coiffed, ideal form defined in her speech bubble.

In illustrating the idealized female figure as a spoken directive, these vignettes made manifest the close ties between visual language and its verbal counterpart. Indeed, the lines of repetitious glyphs in Rocca’s compositions – particularly in Buy More Diamonds and Catalogue Painting – resembled the repetitive written or spoken exercises one undertakes in the hopes of memorizing, if not fully understanding, elements of a new language. Repetition acted here as a method of reinforcement and signified an attempt at deciphering and internalizing these signifiers of beauty and feminine desire. The abundance of neatly ordered vignettes and rows of icons resembled the pages of a text or manual of femininity, and substantiated Rocca’s interest in diagramming the media-driven subject formation women underwent in the 1960s. 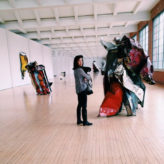 Mina Juhn is a writer based in Brooklyn.