Twofold, London-based artist Peter Liversidge’s current solo exhibition on view at Sean Kelly, delves into dynamics and methods of contemporary art. The most vivid representation of his analytical approach is his proposals exhibited alongside the artworks they eventually bore. Ten artworks hung around the gallery and twelve proposals accompanying them signal two unrealized, failed attempts. Failure, as well as incompetence, prevails the artist’s eclectic body of work. Rather than submitting to its intimidating aura, the artist embraces failure and molds it into a method for an artistic experiment.

Polaroid diptychs surrounding the gallery convey tranquil and meditative scenarios fetched from the core of life. Light reflected on a wavy pool, shadow of a group of trees in New York or one random wrinkly bed sheet spread on a bed are captured in two consecutive shots seconds apart from each other. While differences between two versions in each pair hesitate to unfold, they are there, because time is there. Slight deviations between two versions signal the intruding hand of time. The unattainability of time despite the mankind’s struggle, and failure, to control it prevails the series. Coin Drop, a participatory performance piece in which the audience was asked to drop 25,000 brand new pennies around the gallery floor during the opening reception, manifests the fluidity of time in the same sense, rather through a rather more hands-on method. Shifting around the gallery with guests walking on and around them, pennies will keep roaming for the duration of the exhibition, orchestrating a transformative work of art susceptible to fluctuation. I interviewed the artist about his current exhibition.

Osman Can Yerebakan: Your proposals reflect your way of thinking en route an artwork, but on the other hand, they are, like any artist proposal, administrative documents. How do you draw the line between art and life in terms of these proposals?

Peter Liversidge: I don’t think there has to be a line drawn between them. For me, the Proposals act as a conduit to/for the work, as a starting point; whatever or however that work then manifests itself, the proposal is key.

OCY: In your proposals, there exists a ritual, from the Olivetti typewriter you use to the letter-like finished piece, that seems romantic and hopeful. I can see them as love letters in which you express your admiration to these artworks. Like any love story, here there is the chance for rejection and failure. What does such potential for failure mean to you?

PL: Ritual is important, but failure is vital to progress. It is dependent, of course, on our own personal understanding of failure. Failure is something that is part of my studio practice, in daily experimentation, and then editing work from the studio, I only show a very small percentage of what is made there, the majority folded back in. Within the proposals themselves, there is an invitation to individuals to read them, but what if they don’t? is that a failure on the part of the audience? or upon myself for not engaging them directly enough?

My realization of the work is how I interpret the typewritten proposal; it may not be the correct, or most accurate interpretation of the described work but it is my interpretation. With this in mind, it is always important to remember that there are many ways, directions in which a single proposal can go. Alongside the realized proposals (there are 2 of the 12 Proposals unrealized in Twofold at Sean Kelly Gallery) are the equally important non-realized proposals, which I do not consider to be failures because the individuals reading the typewritten text complete the work through how they respond to and interpret it. This interpretation and internalization by an audience is the central to the work, realized or not.

OCY: You’ve mentioned you are not fully concerned whether the pieces come into fruition or not. You in a way provide every person the potential to imagine and orchestrate their own work. Can we interpret this approach as “anti-object”?

PL: I don’t believe that the approach is anti-object at all. I approach working in this way to invite others into the work but also to start a process which allows my work to develop in opposite, tangential directions whilst always having the exact same starting point – a blank sheet of A4 paper.

OCY: Your Polaroid diptychs and BEFORE/AFTER neon bulb sculptures stem from our problematic association with the notion of time. We know that any game played with time is a losing battle in which we submit to its unstoppable flow. You however challenge this fact in these works. How does time influence you as an artist and thinker?

PL: I always think about how one represents something that is in constant flux and always changing, that has no form no actual physically yet is dependable and always the same day in, day out. The two works you mention address time in subtly different ways. Both are addressing something that is missing. It is not what the two are, but to what they cannot be as a static object/image – the exact point of experience.

OCY: The key to BEFORE/AFTER is that moment that the lights change, not when it is static. At that moment, for a fraction of a second, as it switches between the two words and the work is in play, that is when it actually exists. The random timer that powers the illumination of the two words individually introduces an unpredictable measure to the piece, at any time it may be before, or, after; but of what?

PL: Similarly, the instant photographic diptychs bookend a period of intangible time, marking a specific moment and also its passing. The two images (of the same subject) reveal only the changes that have happened. In trying to replicate the first image with the second piece of instant film, I am questioning the idea of a truly original image. The second image is just a copy of the first, taken once the first has fully developed and has no original intent only one of replication. It is this idea of replication in the context of time passing that is of great interest to me, at what point do we become aware of time passing and how? The shifts, however subtle, between the two images allow us to conceive that time is passing.

OCY: — Your proposals, coin performance and postal experiments challenge not only the dynamics of the art world, but also seem to question the systems of the modern civilization. Can you talk about your subversive drives?

PL: I’m interested in expectation; what could be done, what should be done, how should it be done, and always why? I’ve also always been intrigued by the outsider(s) that exist within accepted ideas of culture. In my early teens, I discovered outsider art, music and the subversive nature of live performance – where the audience and performer meet. A performance by Neil Young on British television was particularly influential, his reverence for the proceedings and for the audience and in turn their reverence for him. This element of the performance was just as important as the actual music for me.

I think you can see this influence in my proposals with how the text from the proposal gives others the responsibility for the work and in as much the work does not have to actually physically exist other than in a description. It becomes about how we as individuals relate to the ideas presented in the text and project ourselves and our experience onto the work. This in turn introduces the question of authorship, to whom the work actually belongs. Once the proposals are written and exhibited they no longer actually belong to me physically or metaphysically.

Interview by Osman Can Yerebakan 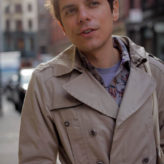