“I think I must have one of those faces you can’t help believing.” So says Norman Bates, solicitous creepster of Hitchcock’s Psycho (1960), about midway through the film. The same could be said for the house in which so many of his crimes unravel—its façade a Hollywood ruse contrived on a Universal Pictures studio set.

But like Norman himself, appearances are deceiving—a fact not lost on British artist Cornelia Parker, whose Transitional Object (PsychoBarn) is on view on The Met’s rooftop garden until, appropriately, Halloween. Dominating the terrace’s southwest corner, the structure is built of materials from a deconstructed red barn in upstate New York, and inspired in part by Edward Hopper—on whose 1925 painting House by the Railroad Hitchcock based the Bates estate. Merging two American archetypes that, associatively, could hardly differ more, Parker probes the extent to which our icons, as our imaginations, can ever be secure. Where the rustic becomes ornate, the staid cinematic, upon what are we as viewers to cautiously rely?

From the fruit cellars of the psyche, such questions start to fester, and Parker playfully nudges us inside. At almost thirty feet, the house at first appears nearly true to scale, especially against the flat garden terrain—the lack of proximity to surrounding buildings skewing the sculpture’s relative height. It is only from a few feet away that this “barn” starts to resemble a barn, the façade’s Gothic force undermined by the structure’s shrunken dimensions and trademark red wooden slats. In the film, the Bates House is constructed of paler, narrower planks, and likely twice the size. PsychoBarn becomes even more diminutive, more Vegas or Disneyland replica, when one peers up from the foot of its weathered porch. Something is decidedly off from this vantage—till recalling that, in the movie, the house looms atop a hill, more terrifying for its series of steps prolonging any attempted escape.

Of course, that house was itself an illusion, built specifically for the film in 1959. Initially two-sided, a third and fourth wall were eventually added so as to use the structure in future projects (such as the “Halloween Knight” episode of Knight Rider, and some cameos on Mama’s Family and Murder She Wrote). Since 1964, the house has also been featured in the Universal Studios theme park tour, its gradual dilapidation prompting a brief petition to “Save the Psycho House” in 2014, reflecting its enduring relevance to collective memory. Parker gestures to the artifice of the edifice by mimicking the scaffolding that held up the original—entirely concealed in the film, but visible to rooftop flaneurs sipping bubbly at adjacent benches.

“The inverse of the cliché is the most unknown place,” explains Parker, and what her “PsychoBarn” enacts is a wry excavation of the cultural uncanny. At the crosshairs of camp and classicism, Psycho shredded conventions like a shadow in the shower. So too does Parker disrupt the Met’s aerial vista with her homage to Hopper, Hitchcock, and a very particular, and haunting, American consciousness.

Cornelia Parker’s Transitional Object (PsychoBarn) is open to the public at The Met Fifth Avenue till October 31st. For more information, visit metmuseum.org. 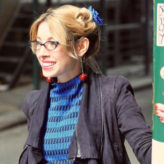 Eileen G'Sell's cultural criticism and poetry have been featured in Salon, Belt Magazine, DIAGRAM, the Boston Review, and Conduit, among other publications. She is Film & Media editor at The Rumpus and she teaches writing, film, and poetry at Washington University in St. Louis.