Fifteen years ago this month, Michael Landy created one of the most interesting and unusual artworks the world had ever seen.

Breakdown was a stoic commentary on consumerism, executed with unflinching precision.  Over fourteen days, Landy and a team of assistants dismantled and destroyed all (literally all) of his worldly possessions. His passport, birth certificate, and bankcard were not spared; and neither was things whose value was more sentimental; like photographs and love letters.

Landy is an artist who has spent his entire career refusing to make any real money from his art, and in this he is one of the most sincere artists of modern times. So often does the salability of an object guide its production, and this is something that too few artists ignore.

Landy also refused to make any money from the work; as to sell anything would cloud the meaning inherent in his rejection of value. None of the material was recycled, and none of it was sold, despite the promise of bags of ground-up material to an investor in the project. To elevate the piles of dismembered material to the status of art (and sell it) would be to give value once again to the objects, something he would avoid at all costs.

Breakdown was an artwork that symbolises the emancipation from material possession that we all secretly crave. Much of what we own are facsimiles of past times, relics that represent memories. We feel that these objects somehow represent us, what we are, and what we once were. We feel that our worth is measured in our wealth.

Our possessions are physical representations of our personality, and without them we are empty.

We feel that we need these things, and our possessions begin possessing us.

The human animal needs very little to survive, and all else is vanity. We crave comfort, and this comfort brings with it a certain craving for embellishment. Gilded objects give us worth, and reflect success. We feel validated in ownership, and it makes us feel powerful.

Landy rejects the comfort he feels in these objects, and decides to free himself from them. In a rejection of the relic, he also re-orders value. A laptop broken down into its component elements is no longer worth the price of the laptop, despite still essentially containing all that was in the original product. In destroying objects, more objects are created, and value is altered in the process. A transfiguration occurred, and a destructive act became a creative one.

Breakdown was a refreshing change from the paradigms of sales-based evaluation of success, and it proves that worth is not measured in wealth. 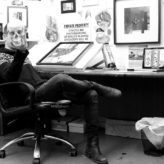 Benjamin Murphy is an artist who over the last few years has exhibited extensively in Europe, The Americas, and Australia. He has a Bachelors and a Masters degree in Contemporary Fine Art from the University of Salford.