Walking in Milan on these days seems like crossing a silent and boiling desert, because of both the general absence of people and the unbearable weather. However, there are several reasons to try hanging outside, such as visiting Prada Foundation, where there are two great exhibitions on display: Theaster Gates’ True Value and Nástio Mosquito’s Template Temples of Tenacity. 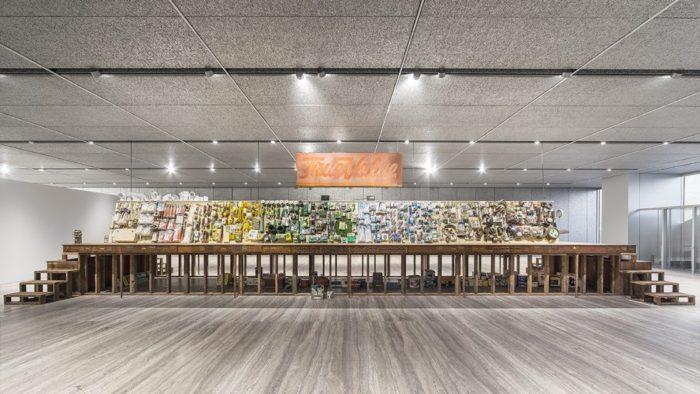 Maybe you remind of Chicago artist Theaster Gates (Chicago, 1973) as Founder of the Rebuild Foundation, a nonprofit association created in 2010 in order to boost a wealthy cultural environment in one of the poorest neighborhoods of Chicago. As its mission tells, the Rebuild Foundation “incite movements of community revitalization that are culture based, artist-led, and neighborhood driven.”

True Value focuses on the same cause. The first floor of the Podium displays part of an abandoned store full of tools that are set into a rigorous chromatic scale, where everything is at its place. While on one hand, the long counter looks like a huge ready-made, on the other it makes you wonder about which was the last time you entered that kind of store, as little shops are disappearing day by day while the big distribution is taking their place. This issue brings to a more complex field that includes the consequences of our contemporary economic system and to what extent we are changing because of it. They once were tools, but now they are a stock of almost useless stuff and this evokes a sensation of regret when thinking about the potential they had. Also, the more one looks at them, the more is easy to start thinking about how they are similar to the people, especially to those that have been left behind and forget by a bigger system, that puts its citizens exactly where they should be, in a strict order that no one shall break. 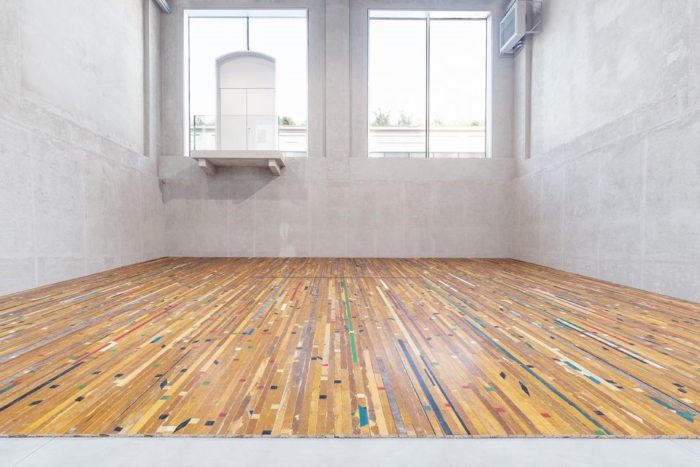 The critic to the political and economic power that today rules the world is evident, but there is also a balancing idea of belief when moving to the Cisterna, where the second part of the exhibition takes place. One of Gates most iconic pieces, the painted gym floor, still reminds us that a cooperation between the individuals is not utopia and that a step back from the Capitalism condition to another based on inclusion and communication could re-build an entire society (or maybe just a neighborhood). The responsibility is due to the individual, and this statement seems to be the bridge that brings the visitor to the next exhibition. 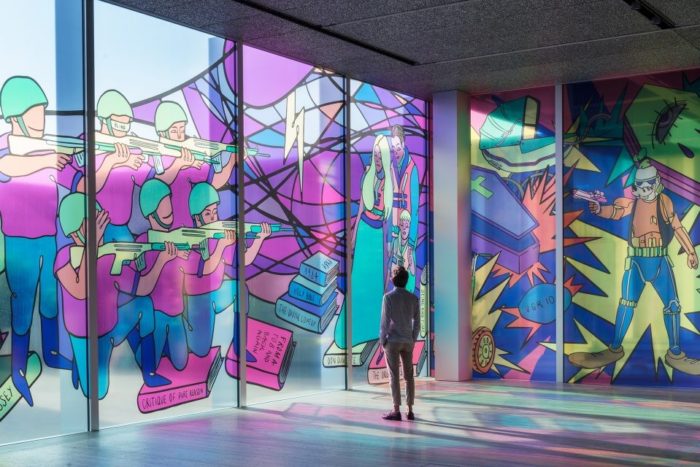 The ground floor of the Podium displays a site-specific installation by Nástio Mosquito (Luanda, 1981) in collaboration with illustrator Ada Diez, WeorNOT (Nastivicious’ Temple #01). The windows of the Podium become a contemporary version of the Gothic Cathedrals’ glass walls, inspiring a sense of quietness and religiousness in the visitor. We are entering into a satiric illustration of our present, in which a cross-over of two popular characters share the same space of some blind soldiers stepping on Immanuel Kant’s “Critique of pure reason” and pointing their rifles at an unarmed family in life jackets.

These pictures want to represent the paradoxes of our world, but the real intention of the artist is to create a place where we can just stop and stare in front of ourselves. Some headphones are playing Mosquito’s voice who encourages us to answer that kind of questions we often avoid “Basically, whose life are you contemplating, are you honouring?”, and to write on a book our feelings, desires or goals. It is a way to help the people discover who the really are, because only by understanding our feels and taking care of ourselves we could critically join a debate around our society, in order to face it and to participate in first person, trying to redefine the world we live in.

So Mosquito is telling us to look at what is going on around us, to think about who we are, but there is also another stage to complete this process: stepping on and talking. As the location itself suggests, after thinking and writing down our thoughts it is time to declare out what is our purpose in this world. A platform with some stairs brings in front of a switched on microphone so that everyone can announce their intentions. This entire room becomes a place without time and space, where the visitor has to challenge himself to discover its inner voice and to share it with the world or, perhaps, with the community living the same place at the same time. 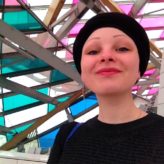 Claudia Contu is currently earning a Master's Degree in Economics and Management of Museums and Exhibition Events in Milan, but she is a precrastinator and loves to have a finger in every pie. As a consequence, she is writing for an online Italian magazine, curating an exhibition and managing her own website, Contemporary Image.