The minimalistic early works of American artist Donald Baechler are currently on exhibition at the equally minimalistic white and concrete chapel of Cheim & Read. Baechler’s paintings are simple, yet probing—symbolic and nebulous. I wasn’t quite prepared for their power.

Filled with quaint homes drawn with solid lines and anonymous youths next to airplanes or teapots, the thematic backbone of this exhibition seems to be suburban melancholy. Except for when it isn’t: a few of the works are profoundly exotic (a sphinx, for instance), but they are invested with the same sentimental pallor such that the collection doesn’t feel discontinuous in the slightest.

There are a couple of oddly patriotic pieces that feature what look like primitive stone statue in front of a red-and-white striped background. Another pop of color is provided in the overwhelmingly monotone exhibition by a pair of bright yellow paintings featuring uncomfortable faces and an apple core.

The faces of his subjects are ghostly—his sharp simplification reduces human features to gaping eye-sockets and mouths. Yet the figures are not haunting—each image is friendly and familiar. This ambiguity seems to be Baechler’s talent.

Many of Baechler’s works, especially his self-portraits, clearly anticipate Jean-Michel Basquiat. Afrikareise, 1984 is a simple work depicting a disembodied, frowning face with an arrow through it—the piece could have been plucked from one of Basquiat’s notebooks.

Baechler’s hand imbues the most ordinary objects with a sacred and symbolic weight. I found myself absolutely captivated by his Sink, 1981. It is rigid, yet nuanced. The pipes and ceramic basin are presented from below, which gives the viewer the impression of really seeing a sink for the first time.

Even in these early works, Baechler merges the personal and the universal, hard and soft, foreign and familiar. These pieces come together and profoundly resonant atmosphere—one is immediately confronted with the humanity in the everyday when walking into Cheim & Read’s white and concrete chapel. 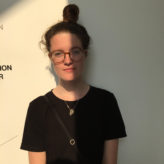 Abby Lynn Klinkenberg graduated from UCLA in 2015 and is now working as a writer based in Berlin, Germany. She is interested in contemporary art, the artistic process, and the modern experience. She has previously written for The Huffington Post. Follow her on Twitter: @abbyklinkenberg