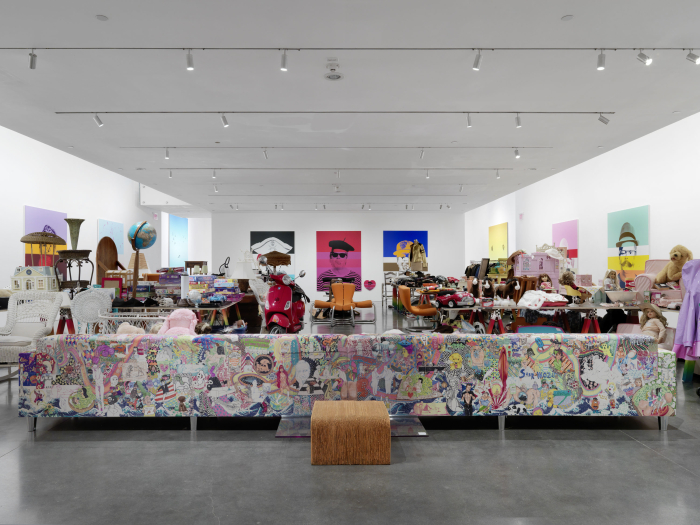 Rob Pruitt celebrated his 50th Birthday with a solo exhibition which opened on Mother’s Day at Brant Foundation Art Study Center in Greenwich, Connecticut.  Ok, so Pruitt, born in 1964, is really 51, but that little bit of artifice really just sets the stage for the rest of the show which is full of irony, social commentary and a little bit of kitsch.  Rob Pruitt is an American artist, who works primarily in painting, installation and sculpture.  While no doubt pleased to have his work in collections such as Brant’s,  Pruitt’s work is ambiguous, self-referential and often mocks the very consumer culture and pomposity that drives the art world.

The Brant Foundation opened in 2009 on the Conyers Farm estate of billionaire art collector and businessman Peter Brant to showcase and house his collection.  Brant, who made his fortune in the paper business, has amassed one of the top collections of American art in the world.  He is the owner of “Interview” magazine (which he bought directly from its founder, Andy Warhol, who was a longtime friend) as well as “Art in America” and ‘Antiques” magazine.   The building itself is a former cold storage structure with a stone façade originally built in 1902 adjacent to the Greenwich Polo Grounds, (which Brant, and avid polo player, also founded).  It was redesigned in 2009 by architect Richard Gluckman.  It comprises a total of 9,800-square-feet and includes a 1,750-square-foot double-height gallery, a single-story 2,300-square-foot gallery, and a 1,500-square-foot mezzanine gallery.

Visits to the Brant Foundation are free and open to the public, by appointment only and with a guided tour.  Just in case you are not sure you are in the right place – upon entering the grounds, one is greeted by a large garden of white flowers, with neat pink flowers which spell out in huge letters – “Rob Pruitt”. This well- manicured garden and lawn is curiously juxtaposed against the tacky googly eyes on the trees, and the oddly strewn bits of clothing and bric a brac to the left of the entranceway.  Although a little disconcerting at first, it becomes apparent that this is one of Pruitt’s well known flea markets and yard sales which he sets in unlikely places mirroring the buying and selling of art at art markets and gallery spaces.  And so the irony begins.

Upon entering, Pruitt’s “101 Art Ideas” is displayed.  This multi-paneled board is covered in sharpie sketched images and text suggesting various art ideas that you can do at home,  from cutting out a stain and framing it, filling a shoe with dirt to make a planter, or covering your face with aluminum to make a mask.  All can be done at little or no expense, with materials readily available from the local Michaels or Staples stores. 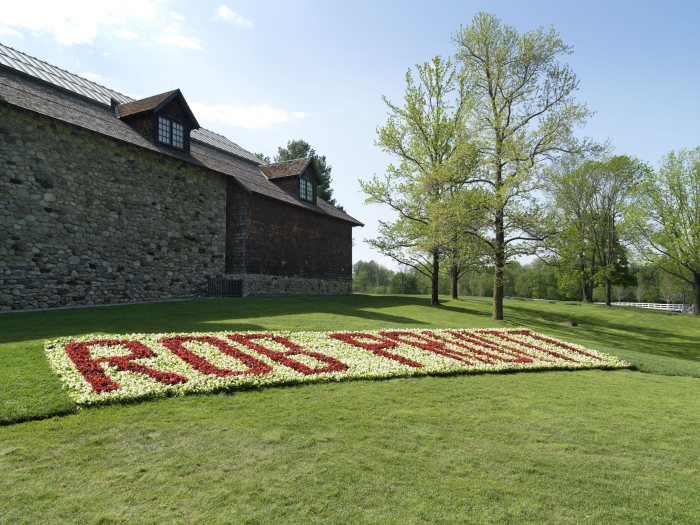 As the tour begins, our guide holds up a pillow from the pile designed by Pruitt available for sale, or free, she explains, if you purchase $200 worth of goods at the flea market ahead.  The first room really just looks like a rummage sale, and is just full of “stuff” donated by the Brant family.  Although, housed in its own section are clothes donated by Brant’s wife, actress and super model Stephanie Seymour, from her couture collection.  Everything is for sale, with proceeds going to Bard College’s Curatorial Program.  While a lot of it has value, most of it, is, well, just “stuff” – table cloths, a Nok Hockey board, board games like “Clue”, “Risk” and “Monopoly”, paperbacks including the Prince of Tides, a biography of MalcolmX, Faulkner’s The Sound and Fury, and a Self-healing Cookbook. There are a few bigger items like old exercise equipment, kitchen items and a scooter, but most is in the usual $5 to $10 range.  Everything is laid out on fold out tables, curiously decorated with more sharpie doodles by Pruitt underneath.  One can’t help feeling a little cognitive dissonance as we mill about the Brant family’s old clothes and knicknacks.  Is this a joke?  Can we really touch it?  Is it really only $5?  How much for the Versace dress?  And the Brant family is complicit in the ruse providing, as Pruitt describes, a little bit of a self-portrait of themselves in the objects they’ve acquired.  The artist makes a point of making the exhibition very personal to the Brant Family who not only declutter their home and sell their belongings, but provide little postcards we were each handed upon entry which indicate each family member’s favorite work of art by Pruitt. The walls surrounding the flea market are decorated with Pruitt’s “Exquisite Self Portraits”.

The next room opens into a brightly lit expanse displaying outsized cloth canvasses in happy tie-dye shades of purple, orange, blue and yellow depicting simple yet curiously expressive faces; Pruitt ironically calls these his “Suicide Paintings”.  They were created for this exhibition and each one he designed depending on his mood when he made them.  A few carefully placed sculptures, Styrofoam shells, chrome painted stacked tires and a stuffed pair of blue jeans complete the display.   The stairwell leading to the next floor is covered on both sides by a work entitled “244 drawings of us” the only work that is actually a part of the Brant Collection, and consists of a series of over 200 whimsical framed “emoji-like” faces in black and white. 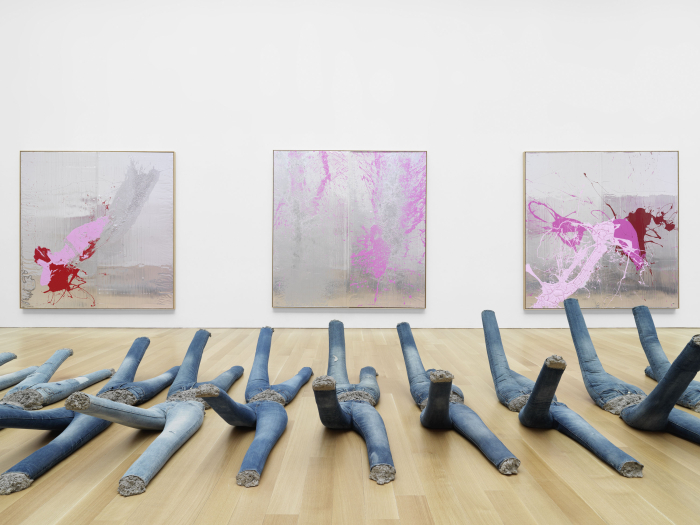 Upon entering the mezzanine level, one is greeted by an undulating row of concrete stuffed blue jeans.  Like reposed Rockette dancers, or synchronized swimmers, each pair of jeans kicks slightly higher than the next, gradually lifting to form an increasing wave of blue, nicely accented by the mirrored wall.  Surrounding the jeans are Pruitt’s foil paintings – aluminum foil wrapped expressionist canvases in shades of red and pink with glitter.  They can be interpreted as flamboyant, sweet  and girly,  or a hideous blood stained mess  depending on how you look at it.  Or in some cases, it just may be a carnival-esque mix of both, a scene where the clowns have gone bad and high-jacked the circus.

Following Pruitt’s “you-can-make-this-yourself-at-home”  theme, in the next room, a series of prints of Marilyn Monroe, recently purchased by Pruitt at Ikea for about forty bucks and painted over with acrylic, are displayed.  These are somewhat similar to his “Obama Paintings” which also just opened this month at The Museum of Contemporary Art in Detroit.  In that series, Pruitt printed out and painted over images of Barack Obama, creating a painting, a series of 2,307 canvasses in total, one for each day he has been in office.

But really, the part of the exhibit really worth the price of admission (which, ok, is admittedly free, if you are willing to take the drive out to Connecticut) is the “Fireplace Room”.   What Pruitt exhibition would be complete without his signature pandas? Coupled with more tires, this time serving as bamboo planters, and purple couches and an Evian Fountain, this series (like most of the rest of the works made recently for the show) have really found their home, with lots of light, and a wonderful window view overlooking the estate grounds.  One really just wants to spend the afternoon in this peaceful, serene happy space.  In fact, Pruitt’s father does just that.  Apparently, Pruitt installs the ashes of his dead father at all of his exhibitions in cleverly designed urns.  In this case, he lays at rest in a nice little Corvette racecar perched above the fireplace on the mantel. 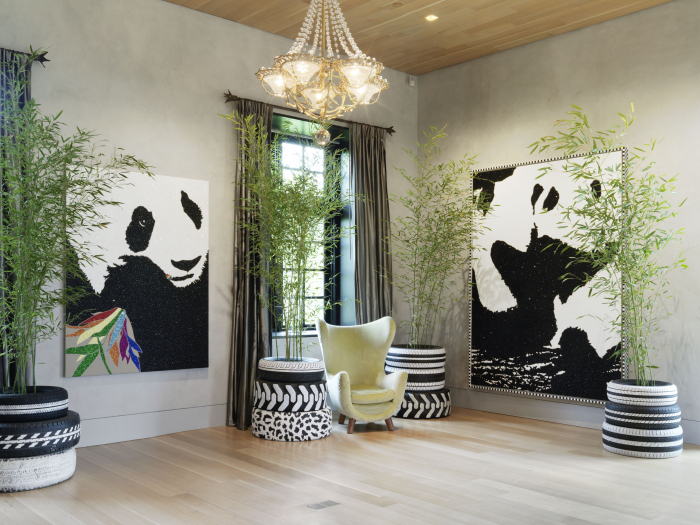 As many know, Pruitt  became an outcast from the art world after a 1992 show at Leo Castelli Gallery when he and his then collaborator Jack Early did a show paying “tribute” to black culture which went terribly wrong.  In an effort to get back in favor (and besides a nice little exhibit providing a huge line of free cocaine to those who attended) he also made pictures of pandas – quoted as saying “Who doesn’t like pandas?”  And he is right.  Who doesn’t like pandas?  In this show, he even has one eating rainbow leaves.  But the reference, much like most of Pruitt’s work, is personal, harkening back to his childhood visits to the Washington D.C. zoo.  And, for all of Pruitt’s pretense that anyone can be an artist, the panda paintings are actually skillfully made – on a raw canvas with paint and glitter, they are really quite beautiful.

Taking the exhibition as a whole, besides the usual humor and commentary on consumerism,  there is a nice environmental, recycling theme that permeates throughout – i.e. the Brant’s donating their things for charity, the painted over canvasses from Ikea, the blue jeans symbolizing the ebb and flow of our oceans. Even in their “cuteness” we think about how we are endangering the natural habitats of creatures, such as pandas, with which we share the planet.   This is most poignantly enshrined in the Evian fountain.  In the circle of pretty pink boxes and the hush sounds of the water flowing,  the viewer grasps the irony, that on a planet made mostly of water, we actually package and purchase this seemingly plentiful natural resource for status and profit.

Finally, as we prepare to leave, we are given one last chance at the flea market, and the guide informs us that if there is anything we want to purchase, we should let her know.  She also collects the cards distributed earlier identifying each family member’s favorite piece.  I thought this was a little odd, in that they are just little strips of paper, and doesn’t the Brant family make paper? But I guess every little bit of recycling counts.  The Brant Foundation does two exhibits per year, one in spring and one in fall.  “Rob Pruitt’s 50th Birthday Bash” is up throughout the summer (by appointment only)  and it’s well worth the trip.

MONDAY TO FRIDAY 10 AM – 4 PM BY APPOINTMENT ONLY

Photographs provided by the foundation and the artist