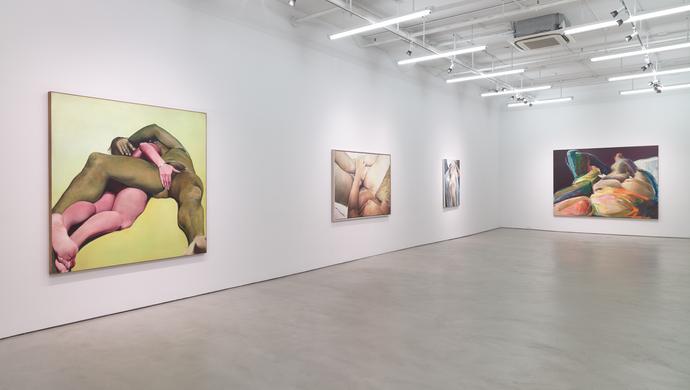 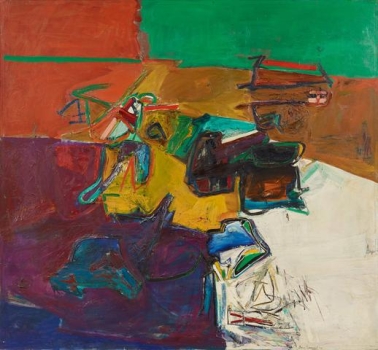 To a great extent Joan Semmel, throughout her artistic career, seems to have attacked the paradox that Naomi Wolf brought to public attention through her work ‘The Beauty Myth’. In a society where women have attained a great degree of economic equality, why are they so depressed and anxious and why are they so obsessed with notions of beauty that still leave them as male objects of desire? The more freedom and equality women gain, the more feminine and desirable to men they seem to want to be. In her art Semmel has aspired to present a less self-conscious sense of female sexuality through experiments combining figurative and expressionistic elements as well as cropped images based on photos and images containing mirrors and cameras so that we are constantly aware of the usual ‘object’ of male art and desire finally attempting to view herself ‘through her own eyes’. 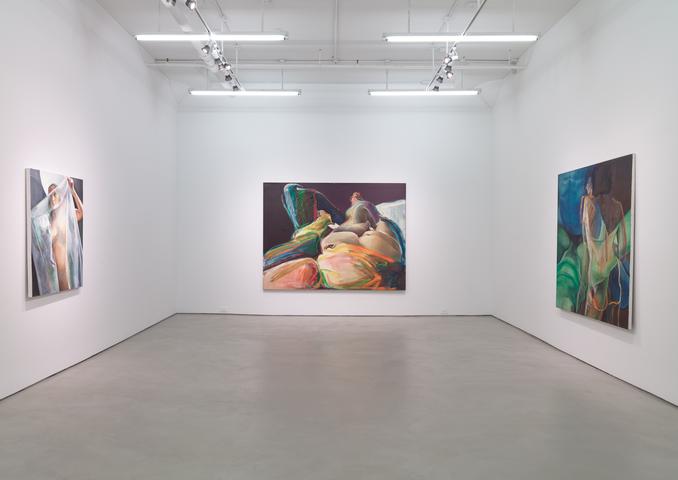 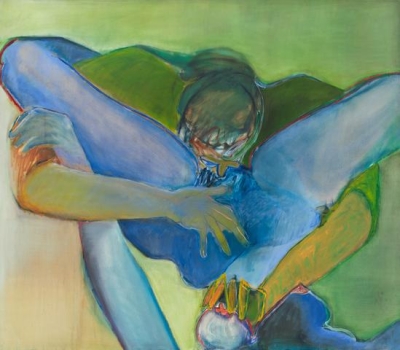 The eye-catcher for me in this show, the piece which I saw through the window of the gallery and which compelled me to enter Alexander Gray Associates, is an untitled piece from 1971 of a man performing cunnilingus on a woman. To openly distinguish the piece from any semblance of pornography, Look at this image for a start the figures are expressionistic and portrayed in unrealistic colors. We see a man engaged in a type of selfless aggression to bring the woman to orgasm. Indeed, that this is a deliberate and voluntary process is revealed through the open eye looking, apparently, to see whether the woman is responding favorably. His lust or commitment toward this selfless sexual gesture for the woman is, also, unquestionable – he is obviously driven and deriving immense pleasure as he performs oral sex. This relatively early piece by Semmel, during the early stages of the feminist movement in the USA, turns the normal sexual power-dynamic of both art and pornography upside down. It’s an amazing piece which, basically, modeled or hinted at, in 1971, a possible new type of sexual relationship, or public portrayal of a sexual relationship, between men and women.

Throughout the gallery we also see paintings of women intertwined with lovers or alone, or even lying naked next to a lover in an attempt to reimagine “…the nude without objectifying the person, of using a specific body rather than an idealized form.” Some paintings with deliberately cropped heads are of Joan herself. Heads are deliberately cropped to connote an autobiographical perspective that subverts the viewer’s accustomed tendency to assume the traditional role of the erotic voyeur. In many of Semmel’s paintings of nudes we get a sense of ease and equanimity instead of anxiety to please or conform – instead of the idealized feminine body we get a body at peace with itself, some bodies engaged in a meaningful emotional and sexual union with an equal and equally loving partner. 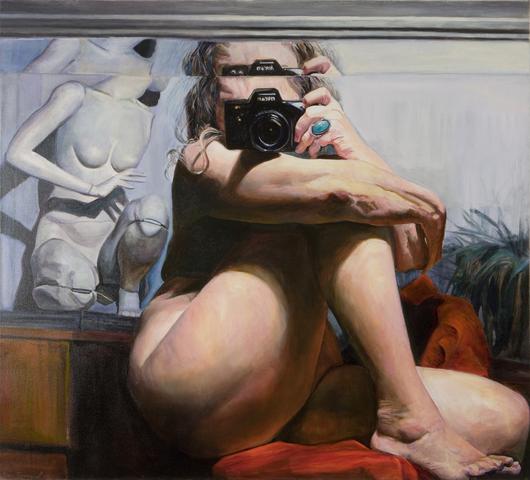 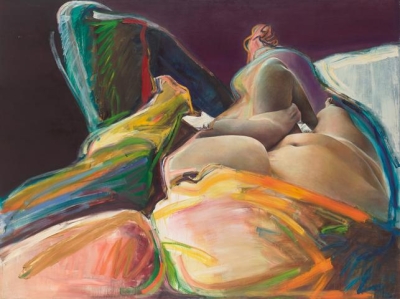 Long before the term ‘selfie’ was created, we also see various paintings of Semmel, camera in hand, looking into a mirror, photographing herself as she enters a period of life and the aging process which has been prohibited in art. When we see aging women in the Western tradition, we recall the ‘vanitas’ paintings, warning us of the transitory nature of life and need for greater religious commitment. Old women painted by male artists have often warned other males that every woman is a potential hag, female beauty is a deception and women are evil deceivers and spiritual vampires. Semmel challenges this approach as well – she disabuses the traditional pictorial abuse of women with a basic reality which invites fellow-feeling and compassion for our shared human condition.

As Semmel wrote, “I wanted the body to be seen as a woman experiences herself, rather than through the reflection of the mirror or male eyes. The fundamental problem of subject and object was always present, and using my own body was one method of dealing with this. More importantly, it made it clear that the artist was female, and undercut the stereotypes of male artist and female muse. I wanted to subvert this tradition from within.”